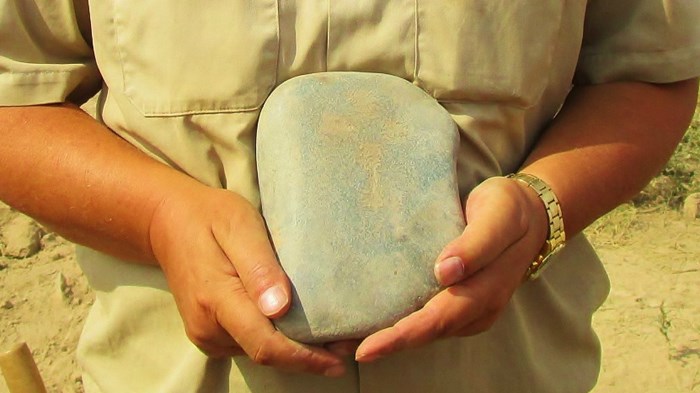 A team of archaeologists uncovered seven Christian gravestones late this summer in the ancient Silk Road city of Ilyn Balik near the Kazakhstan-China border.

The historic find is rare archaeological evidence that eastern Christianity was established along East-West trading routes hundreds of years ago, not brought in by the Russian Orthodox Church as many had believed.

“This discovery supports the understanding of ancient Kazakhstan as a multicultural center between the East and West with Muslims, Buddhists, and Christians living among the local herdsmen and nomadic tribes,” stated Thomas Davis, a member of the field team and archaeology professor at the Tandy Institute for Archeology at Southwestern Baptist Theological Seminary (SWBTS) in Fort Worth, Texas.

“[It] reinforces so much of what we already knew about the church of the East in central and eastern Asia,” said Philip Jenkins, author of The Lost History of Christianity.

“It is strange to think that at the time those places flourished, they might have been on the same scale as the famous Christian cities of Europe,” the Baylor University history professor told CT. “There is nothing new in the world except the history we have forgotten.”

Kazakh evangelicals hailed the discovery. “Nobody can tell me that I don’t have Christian roots,” one believer told the Tandy Institute.

“It proves that Christianity was present here in Kazakhstan before Islam,” said a prominent Kazakh pastor who requested anonymity.

“It is a door opening for evangelism and talking about Jesus,” he told CT. “History tells me what my fathers believed, as we as a nation consider what we should believe. God is going to use this and open doors.”

Much of the contemporary Christian presence in Kazakhstan comes from the Russian Orthodox Church, and there is a common belief in the nation that Christians are Russian, not ethnic Kazakhs. Since Kazakhstan gained independence from the former Soviet Union in 1991, evangelical house churches have spread widely. 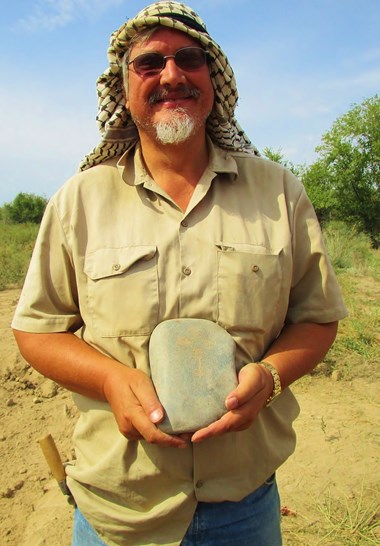 An ancient gravestone inscribed with a cross, held by Thomas Davis of Southwestern Baptist Theological Seminary.

The archaeology project began two years ago in Usharal, an eastern city 37 miles from the Chinese border, when a local man seeking building material picked up a stone inscribed with a Nestorian cross. The stone made its way into the hands of Karl Baipakov, the top archaeologist in the nation and an expert on the Silk Road, the ancient overland trading route from the Mediterranean Sea to China.

Baipakov leads Kazakhstan’s Center for Cultural Rapprochement, which supports archaeology that advances the country’s self-perception as a nation of diverse religious faith. (Muslims make up 70 percent of the country’s 18.3 million population, while Christians make up 26 percent.)

The center supported the creation of a joint Kazakh-American team to excavate outside Ilyn Balik. SWBTS’s Tandy Institute for Archaeology became the US partner.

Late this summer, the team began initial excavations outside the boundaries of Ilyn Balik. In a matter of days, they recovered eight headstones. Seven were inscribed with distinctive Nestorian crosses. The stones were clustered together outside the main settlement area. One stone included an inscription, indicating a date of A.D. 1162.

Davis said that next summer an excavation team will return to Ilyn Balik, which was larger than the old city of Jerusalem. They will look for human remains as well as evidence of a church.

“This is fundamental to local believers,” he told CT. “Kazakhstan had its history suppressed in the Soviet period. After independence, they began to rediscover who they were.”

Kazakh leaders hope to document the presence of indigenous Christianity prior to the arrival of the Orthodox church during Russian colonization, Davis said. “If Christianity is present in Kazakh history before it is imperially imposed, then it is something that is part of the identity of being a Kazakh.”

1 of 2
An ancient gravestone inscribed with a cross, held by Thomas Davis of Southwestern Baptist Theological Seminary.
expand