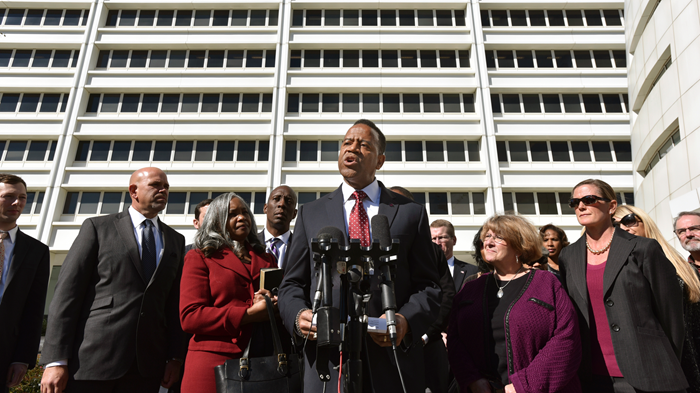 Both sides are claiming victory after a federal district court released an order Wednesday weighing the case of Atlanta’s former fire chief, Kelvin Cochran, who claimed he was fired over his Christian views.

In Cochran v. City of Atlanta, the US District Court for the Northern District of Georgia said that the city’s restrictions on non-work speech, which were used to terminate Cochran, “do not set out objective standards for the supervisor to employ” and do not “pass constitutional muster.”

Judge Leigh Martin May backed Cochran’s claims related to the policy’s prior restraint and unbridled discretion being in violation of the First Amendment. However, she sided with the city and against Cochran over claims of religious discrimination.

“The government can’t force its employees to get its permission before engaging in free speech,” said Alliance Defending Freedom senior counsel Kevin Theriot, who represented the former Atlanta official.

A spokesperson for the Atlanta mayor’s office told local news that the judge ruled “in the city’s favor on all major constitutional issues, and specifically rejected Mr. Cochran’s claim that the city violated his due process and other First Amendment rights of freedom of association, free speech, and free exercise of religion.”

May heard arguments last month in Atlanta regarding the city’s 2015 firing of Cochran. The city terminated Cochran, now a staff member of a Southern Baptist church, after he wrote a men’s devotional book that advocated in a brief section the biblical view of marriage and sexuality, including that homosexual behavior is immoral.

Cochran had requested that May issue a summary judgment in his favor, while the city of Atlanta had asked the same for itself. At the November hearing, May indicated a jury trial was likely in the spring on the issues she may not decide in her December ruling, The Atlanta Journal-Constitution reported.

The case is among of a mounting number involving employees or business owners whose religious convictions about such issues as same-sex marriage and homosexuality clash with the viewpoint of the government.

Southern Baptist religious freedom advocate Russell Moore said Cochran’s case “should be of concern to every American, not just to those of us who are believers.”

“The government should not be in the business of firing people from their jobs simply because they have religious convictions,” said Moore, president of the Ethics and Religious Liberty Commission, in written comments for Baptist Press. “This heavy-handed bullying of Chief Cochran, if let stand, could end up harming countless numbers of people who hold beliefs that are not approved by the government at the time.”

Theriot told BP in November, “This is a very significant case for all people of faith because if Chief Cochran loses, it means people of all faiths who believe in biblical marriage can be discriminated against by the government.”

Theriot, in an earlier written release, had noted, “A religious or ideological test can’t be used to fire a public servant, but that’s what the city did, as the facts of this case clearly demonstrate.

“Chief Cochran is one of the most accomplished fire chiefs in the nation, but the city’s actions place every city employee in jeopardy who may hold to a belief that city officials don’t like,” Theriot said.

The city argued that Cochran’s viewpoint was not the primary basis for his firing, saying the fire chief violated its policy in publishing the book, according to the Journal-Constitution. However, ADF contends that comments by city officials demonstrate the book’s viewpoint was the reason for Cochran’s termination.

A lawyer for the city said in court that Cochran listed his fire department title in the book without permission and failed to inform the city of its publication, the Journal-Constitution reported. Cochran says a city official verbally approved both the publication of the book and the use of his title in the book, which he wrote on his own time.

The city’s requirement that employees obtain approval before writing a book is clearly unconstitutional, Theriot said.

The city conducted an investigation but found Cochran had not discriminated against anyone stemming from his religious beliefs, according to ADF.

ADF was hopeful that May would grant summary judgment to Cochran regarding his free speech and free exercise of religion claims “because the city has admitted it considered his religious speech when suspending and firing him,” Theriot told BP in November, saying he was confident the judge would issue “a very well-reason[ed] opinion.”

After the hearing, Cochran said the city is “unjustly accusing” him of the very thing—discrimination—he has experienced and been committed to eliminating in his profession.

“It is still unthinkable to me that the very faith and patriotism that inspired my professional achievements and drove me to treat all people with love and equity is what the government ultimately used to bring my dream career to an end,” Cochran said in written remarks prepared for a post-hearing news conference in November.

“In my life I have experienced firsthand the negative attitudes, racial slurs, and discrimination because of the color of my skin,” Cochran said. “Because of that, I’ve lived by the conviction that, should I ever be in a position of leadership, that I would never allow someone to have the same experience of discrimination I did as a minority.”

In that vein, Cochran said he created the Atlanta Fire Rescue Doctrine to establish “a culture of justice and equity” and to seek to remove “racism, sexism, favoritism, cronyism, anything that would interfere with a wholesome work environment for any people group within the fire department.”

Cochran is chief operating officer of Elizabeth Baptist Church, a multisite church in the Atlanta area.

He served on the Resolutions Committee at the 2016 Southern Baptist Convention meeting and presented a resolution affirming Southern Baptists’ commitment to biblical sexuality and urging protection for religious free exercise. Messengers approved the resolution.

Cochran was one of the first African Americans to serve with the Shreveport (Louisiana) Fire Department and became its fire chief. He became Atlanta’s fire chief before President Obama appointed him as US Fire Administrator. He returned to Atlanta and served as its fire chief for five years before his termination.

Editor’s note: An earlier version of this story misstated that the judge had found Cochran’s firing itself to be unconstitutional, vs. only the city policy that gave rise to it. CT regrets the error.