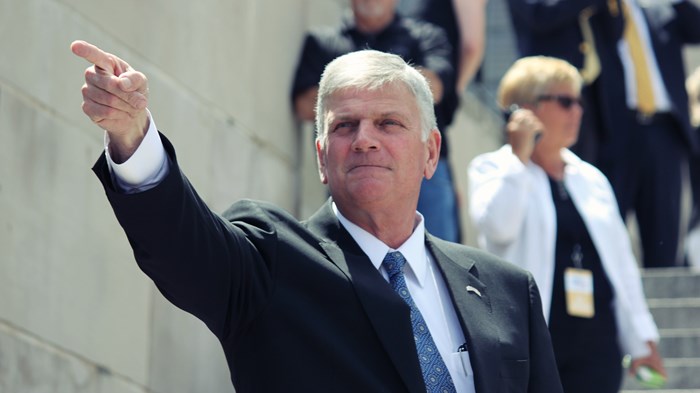 Compared to Franklin Graham’s evangelistic rallies in far-off countries, his upcoming event in Vancouver is relatively close to home. But the diverse, mostly secular Canadian city is culturally a world away from the Bible Belt.

That’s partly why a group of fellow evangelicals has joined local Christian leaders asking him not to speak at the Festival of Hope, a Billy Graham Evangelistic Association event scheduled to take place next week in the Vancouver Canucks’ arena.

For months, a group of Vancouver pastors have raised concerns about Graham’s “contentious and confrontational political and social rhetoric,” particularly his characterizations of the LGBT community, Muslims, and immigrants.

Context matters for evangelism, and they worry that a figure who has made such controversial remarks won’t be a good fit to share the Good News with the more progressive people of Vancouver. Especially not right now.

“Given that the express goal of this event is evangelism, with the commitment of new believers to Christ, we do not believe that Rev. Graham … should be the exemplar that impresses itself on these new believers,” wrote four evangelical pastors and a Catholic leader who were invited to endorse the March 3–5 event, but opposed Graham’s place as keynote speaker.

The latest statement against Graham’s appearance was released Friday afternoon and signed by leaders representing 60 percent of Vancouver’s Christians. Pastors from Baptist, Reformed, Foursquare, Vineyard, and nondenominational churches signed the letter, along with representatives from Catholic and mainline churches.

“Hopefully it will differentiate the mainstream Christian vision from what Franklin Graham has said,” Tim Dickau, senior pastor at Grandview Calvary Baptist Church, told CT. “We’re not opposed to the festival. But it’s important to distinguish that, ‘No, we disagree with these aspects of his statements.’”

President Donald Trump’s election in the United States has put Canadian evangelicals in a sensitive spot. Evangelicals make up only about 10 percent of Canada’s population, compared to 25 percent in the US, and number even fewer in Vancouver. Trump’s perceived association with evangelicals has only made their reputation worse among the people they seek to reach.

“There’s a real sense of conflating Trump with evangelicals,” which doesn’t go over well in liberal Vancouver, said Ken Shigematsu, pastor of Tenth Church, one of the largest and most diverse congregations in Canada.

And while Graham did not endorse Trump, he prayed at his inauguration, appeared alongside the president during his victory tour, and has championed his recent policies.

Shigematsu was a sponsor of the Festival of Hope, and knows its organizers through his mentor Leighton Ford, Billy Graham’s brother-in-law and a Toronto-born evangelist. But the Christian and Missionary Alliance pastor ultimately decided to withdraw his involvement from the event. Shigematsu said Franklin Graham’s political positions, particularly on refugees and immigrants, were “at odds with our church’s vision and ethos.”

About 1 in 4 evangelicals in Canada today are immigrants, a demographic credited with recent church growth in the country, according to the Evangelical Fellowship of Canada (EFC). The Vancouver Sunreported that “Graham’s crusade runs the danger of dividing the city’s ethnically diverse Christian population of roughly 850,000, since it continues to be actively promoted, including on bus ads, by dozens of prominent evangelical clergy.”

As of last week, more than 300 churches had signed onto the event. Local pastors involved emphasize the importance of gathering as a Christian community and hearing the gospel message proclaimed on such a large scale.

“Obviously, our hearts are a little heavy that different relationships and different colleagues are at odds with the vision and the purpose of the Festival of Hope,” said Giulio Gabeli, the event’s executive leader and the lead pastor of Westwood Community Church, in a CBC radio interview. “We’ve agreed to disagree, and once again, our desire is very simply to present a very clear gospel message—a message of hope to our city.”

While most Canadian Christians know Billy Graham, he’s not prominent enough for the average non-Christian Canadian to recognize his son and successor’s name. Controversy around Franklin Graham’s first major Vancouver rally, which expected to draw in 25,000 attendees over three days, has forced a hasty introduction.

Billy Graham held his only crusade in Vancouver back in 1984, and the event similarly elicited mixed responses. Ed Hird, a pastor and writer who helped organized the event, penned an article five months before it to quell reservations. A “concern raised by some people is, ‘Isn’t Billy Graham just an extreme right-wing fundamentalist?’” he wrote. “Although he certainly believes in the biblical essentials, he is more accurately described as a solid evangelical.”

The evangelicals opposed to Franklin Graham’s involvement in the Festival of Hope suggested organizers try for another member of Graham’s family—perhaps sister Anne Graham Lotz or son Will Graham, or an evangelist more familiar to Canadians like Ravi Zacharias (who’s Canadian-American) or Luis Palau (who’s based in Portland and has previously held events in the area).

The Billy Graham Evangelistic Association of Canada did not change the lineup. The organization released a statement from Franklin Graham saying he will share “the simple gospel message: a timeless message of God’s hope, love, and redemption for all people regardless of ethnicity, age, or gender identity.”

“Politics, policies, economics, and commerce are significant matters, but for these three days we will come together in Vancouver to focus on the most important thing of all: God’s love for each and every one of us,” stated Graham.

In a larger country with a smaller population, Canadian evangelicals are more likely to support sharing resources and welcoming immigrants and refugees; they are less likely to feel a sense of “manifest destiny” or to see their country as a Christian nation, according to Brian Stiller, the Ontario-based global ambassador of the World Evangelical Alliance. “The religious nationalism of the US is not duplicated in Canada,” he said.

“What we do want here … is that the message of Jesus be clear and unadorned with political and economic trappings,” said Stiller, a past president of the EFC and of Tyndale University College and Seminary. “When those are mixed, especially in a public forum, the unintended consequences are that our witness may clouded, and the free flow of ministry mitigated.”

The efforts to remove Graham from the festival took on graver urgency when Vancouver mayor Gregor Robertson raised concerns about the rally and resulting protestors stirring up violence. The nation is still reeling from a mass shooting a month ago at a Quebec mosque; the suspect supported Trump and made negative remarks about refugees online.

Earlier this month, Robertson met with more than a dozen evangelical, mainline, and Catholic leaders about Graham’s event, including Paul Spilsbury, a dean at evangelical Regent College; Richard Topping, a Presbyterian and president of Vancouver School of Theology; and Jonathan Bird, president of the evangelical organization City Gate Leadership Forum, according to the Sun.

The opposition to Graham’s keynote in Canada follows recent pushback in Puerto Rico. Prior to his San Juan rally in mid-February, the Baptist Churches of Puerto Rico withdrew its support, citing his endorsement of Trump policies. More than 11,000 people attended the event, including National Hispanic Christian Leadership Conference president Samuel Rodriguez.

The promotional materials for the Festival of Hope state that “Canadians today know less about Jesus than at any other time in Canadian history.” Many of Vancouver’s evangelical leaders believe Graham’s rally will help change that—energizing the faithful and introducing new believers to the gospel. However, some evangelicals worry about their neighbors capturing an inaccurate view of Jesus if political baggage detracts from Graham’s message.

“It is not our intention to vilify the Festival’s organizing committee,” stated the concerned pastors in their letter. “We simply believe it is a mistake to think Franklin Graham’s political stances are immaterial to his presenting the gospel.”

Both sides agree—in almost stereotypically friendly Canadian fashion—that these different approaches can coexist within their shared faith. “Events come and go, but relationships endure,” said Galebi, the Festival of Hope’s executive leader. “We’re not divided, we’re not separated; I want to make that very clear.”

Offering a Christian presence and witness in Vancouver is a lifelong task that belongs to all of us. Unfortunately it’s one we may find more difficult if our fellow citizens are given the impression that [Graham’s] remarks are representative of Christianity.

Christians can legitimately disagree with one another on many issues of political and religious policy, and we do engage in ongoing conversation about these issues. Biblical ethics do not sort neatly into “conservative” and “progressive” circles, even less so among Canadian Christians than our American counterparts.