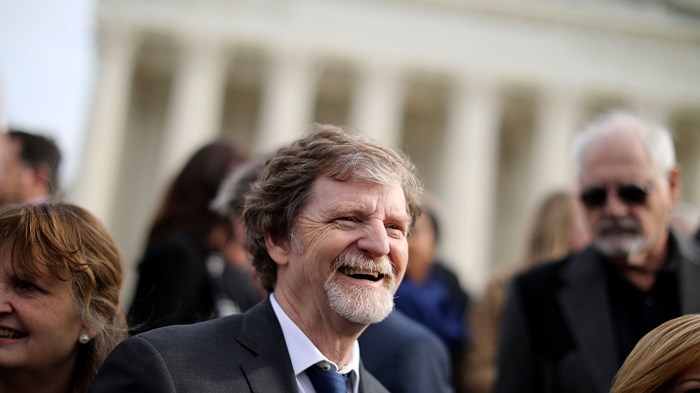 In the biggest religious liberty case of the year, the US Supreme Court sided 7–2 against a state commission that unfairly singled out a Christian baker who declined to decorate a cake for a same-sex wedding.

The high court ruled that state penalties levied against Jack Phillips, the Colorado business owner at the center of Masterpiece Cakeshop Ltd. v. Colorado Civil Rights Commission, violated his First Amendment rights to free exercise of religion since the regulations were not applied neutrally.

While the court clearly came down in Phillips’s favor, Anthony Kennedy acknowledged in the court’s opinion that similar cases (like those that have come up involving photographers and florists, as well as pizza shops and a range of other businesses) may be adjudicated differently.

As SCOTUSblog wrote in summary, the decision still allows for the government to bar discrimination against same-sex couples, “so long as the law is applied neutrally and without hostility to religion. But whether the very same law could sometimes violate free speech rights is still totally open.”

According to religious liberty scholar Thomas Berg, law professor at the University of St. Thomas in Minnesota, the Masterpiece Cakeshop ruling opposes outright religious hostility but offers little indication on how future cases would pan out in different contexts.

“This is a narrow, fact-based ruling, resting on two sorts of indicators that the Colorado state decision-makers were hostile to Phillips’s traditionalist religious beliefs about marriage,” he told CT:

First were statements by various civil-rights commissioners denigrating or dismissing his beliefs (one called them “despicable pieces of rhetoric” and compared them to slavery and the Holocaust; another said there’s no right for a person to “act on his religious beliefs if he wants to do business in this state”). Officials in future cases can easily avoid this problem by not articulating such views publicly, even if they hold them. That might not change any results.

Second was that Colorado was inconsistent in several ways in prohibiting Phillips from declining to provide a same-sex-wedding cake, while allowing other bakers to decline to provide cakes with anti-gay messages.

“No one should be forced to violate their faith in order to earn a living, and Jack, who I’ve met and consider a friend, just wants to be free to live out his faith in his chosen profession,” stated Jim Daly, president of Focus on the Family in Colorado Springs, who was “delighted” at the ruling and its implications for religious freedom.

Phillips, who had provided cakes for gay customers in other circumstances, argued that making a cake for a same-sex wedding would be an endorsement of the marriage and a violation of his beliefs.

“I know Jack would want me to remind all of us that his court victory is not a time for gloating or disrespect toward those who disagree with us,” Daly said. “Rather, we have an opportunity to build bridges and forge trust and mutual respect with our neighbors, coworkers, and fellow citizens who have a different opinion than ours.”

Mark Rienzi, president of Becket (formerly the Becket Fund for Religious Liberty), called the decision “a strong message to governments across the country that they must respect—rather than punish—religious diversity on important issues.”

Writing for the Southern Baptist Ethics and Religious Liberty Commission (ERLC), Joe Carter noted that the implications of today’s ruling are limited. He concluded:

What is significant about the case, though, is that the Court reiterated, as Justice Kagan says, that “state actors cannot show hostility to religious views; rather, they must give those views “neutral and respectful consideration.”

In the court’s opinion, Kennedy addressed the process and decision-making made by the state agency in Phillips’s instance in particular.

“The Commission’s hostility was inconsistent with the First Amendment’s guarantee that our laws be applied in a manner that is neutral toward religion,” he wrote. “Phillips was entitled to a neutral decisionmaker who would give full and fair consideration to his religious objection as he sought to assert it in all of the circumstances in which this case was presented, considered, and decided.”

The unequal treatment in this case was relatively straightforward: While the state commission did not allow Phillips to refuse to bake the cake on religious grounds, three other Colorado bakers were not penalized for turning down a cake request that “would have required them to violate their secular commitments,” wrote Neil Gorsuch—the court’s newest justice and himself a native Coloradan—in a concurring opinion.

“That kind of judgmental dismissal of a sincerely held religious belief is, of course, antithetical to the First Amendment and cannot begin to satisfy strict scrutiny,” he wrote. “The Constitution protects not just popular religious exercises from the condemnation of civil authorities. It protects them all.”

Since the decision centered around the state commission’s failure to act neutrally with regards to Phillips’s religious freedom defense, the accommodation exception for Masterpiece Cakeshop does not universally apply to all Christians who desire to refuse service to LGBT customers on religious grounds.

“The outcome of cases like this in other circumstances must await further elaboration in the courts, all in the context of recognizing that these disputes must be resolved with tolerance, without undue respect to sincere religious beliefs, and without subjecting gay persons to indignities when they seek goods and services in an open market,” Kennedy wrote.

Berg and other religious liberty experts have weighed in on the decision’s impact on Christian businesses as well as the questions left unanswered.

Despite predictions that the Supreme Court would end up split over this much-anticipated case, the rest of the court concurred with Kennedy, with only Ruth Bader Ginsburg and Sonia Sotomayor dissenting.

CT previously reported how Phillips received the backing of the Trump administration and what was at stake for conservative Christians in the wedding industry.