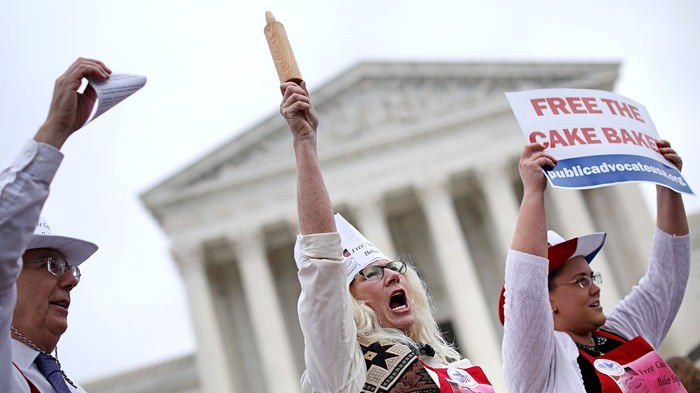 The case of a Christian baker refusing to design a cake for a same-sex wedding became, in the eyes of many, the most-anticipated Supreme Court decision of the year because justices had a chance to finally resolve America’s ongoing struggle to balance sincerely held faith convictions and LGBT protections.

But in Masterpiece Cakeshop Ltd. v. Colorado Civil Rights Commission, the court’s 7–2 ruling did not establish a new precedent outright allowing or barring Christian business owners from serving customers based on their faith convictions. Instead, the narrow decision favored baker Jack Phillips over a state agency that the high court ruled had demonstrated an unconstitutional hostility toward his Christian beliefs.

CT asked religious liberty experts to weigh in on what the complicated ruling actually means for conservative Christian business owners in the wedding industry:

Thomas Berg, professor of law and public policy at the University of St. Thomas (Minnesota):

This is the court’s first tangle with the issue of religious vendor refusals and LGBT rights, and the justices obviously wanted to proceed slowly. But there are other cases coming, including the Washington florist currently before the court. The justices will have to accept another one for review if they want any control over what this opinion means.

The court indicates that the interests of both LGBT people and religious objectors must be taken seriously—a central theme of the amicus brief that [University of Virginia professor Douglas Laycock] and I filed for the LDS Church and other groups. But the court doesn’t say exactly what that means. Does it just mean no outright hostility to a religious belief? Or might it mean that the interests of traditionalist Christians in following their faith while in business must be weighed significantly in the balance?

The latter would give more protection. And note that the court does say that one piece of evidence of state hostility is if the decision-makers tell you to leave your beliefs behind when you “do business in this state.” However, Masterpiece makes it clear that protections from antidiscrimination law in the commercial sphere will be narrow—limited to objections tied to a specific event like a wedding—because LGBT people have a strong interest in receiving full service in the market.

At a very general level, the decision indicates that the Court will take a flexible view toward whether a law is “neutral and generally applicable toward religion” under the free exercise clause test that has been used since 1990. The state clearly cannot win just by showing that the text of a law does not single out religion. The court will look at the background of the law—including both lawmakers’ explicit statements and the nature of their reasoning—to find even “subtle departures” from neutrality. That could strengthen the free exercise clause across the board, not just in cases involving LGBT rights.

Michael W. McConnell, director of the Constitutional Law Center at Stanford Law School and a senior fellow at the Hoover Institution:

Justice Kennedy's opinion in favor of the Christian baker, for a 7-2 majority, was scrupulously cautious in refusing to comment on possible future cases or broader implications. But no one should mistake the principle.

The decision was right and good, regardless of whether it was as broad and sweeping as it could possibly be. The court here decided that the Colorado Civil Rights Commission treated the religious beliefs of Jack Phillips with impermissible hostility and animus. Along the way, the majority opinion asserted strongly that courts must treat people of faith neutrally and that any kind of animus or hostility is itself a violation of religious liberty.

So while it’s unclear what this decision will mean for similar cases and others in the wedding industry, Jack Phillips was still victorious today. And further, we should be thankful for the court’s demand that the cases of others who work in the wedding industry must be considered and decided neutrally, fairly, and without hostility or animus.”

Michael V. Hernandez, dean and professor of the Regent University School of Law:

This was a typical Roberts court opinion, decided on the most narrow grounds possible to obtain a consensus. Although it is encouraging that seven justices voted to overturn Phillips’ fine, the opinion leaves the most pressing issues (broad protection of religious liberty and freedom of speech) unresolved. It upholds only the principle that the application of antidiscrimination laws must be neutral, generally applicable, and not grounded in animus to religious belief.

State actors are now on notice that they may not target traditional religious belief and expression explicitly in word or in deed. If state officials cloak their opposition to traditional religious belief in neutral terms and actions, the next battle will be over whether free speech protection extends to traditional Christian beliefs on these issues. Only Justices Thomas and Gorsuch explicitly indicated that they would extend that protection to conservative Christian wedding cake bakers.

It is shocking, but not surprising, that Justices Ruth Bader Ginsburg and Sonia Sotomayor asserted in dissent that the overt animus of members of the Colorado Civil Rights Commission was irrelevant because a state statute protecting gay rights trumps the constitutional protection of religious liberty. The implications of their extreme view are truly staggering and frightening.

Becket urged the court to decide the case on the basis of the free exercise clause, and that is what the court did. And because of that, this case has broad implications for other religious liberty conflicts, involving not just wedding vendors, but many other religious people too.

The decision breaks new doctrinal ground in a couple of places … For example, Justice Kennedy adopts the two-Justice part of Lukumi and turns it into newly binding precedent in this passage: “Factors relevant to the assessment of governmental neutrality include ‘the historical background of the decision under challenge, the specific series of events leading to the enactment or official policy in question, and the legislative or administrative history, including contemporaneous statements made by members of the decisionmaking body.”

What this means as a practical matter is that in a variety of situations it will matter much more what the legislators, adjudicators, and government officials say about the religious beliefs and practices in question, and much less what those same officials think about whether those religious beliefs and practices offend someone. The court used a fairly broad definition of what constitutes hostility toward religion, so referring to “hateful beliefs” could get an anti-discrimination law invalidated. And saying that someone was offended will be no justification for a law.

The main takeaway from today’s decision is that both the Constitution and the Supreme Court are saying that we should all try and get along in this fractious country of ours. We at Becket strongly believe it’s worth a try.