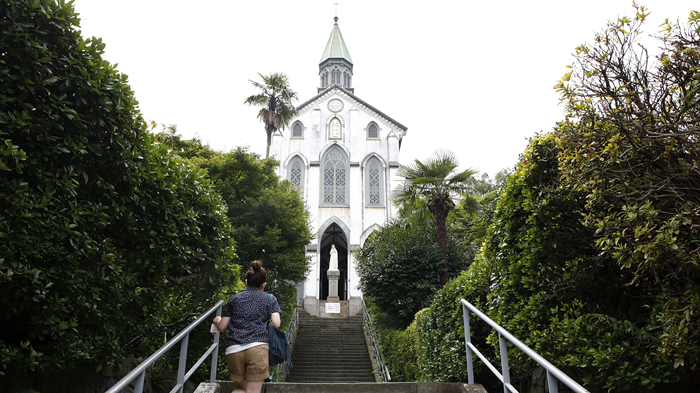 Image: Kiyoshi Ota / Getty Images
Nagasaki’s Oura Church, the oldest church in Japan, is also known as the Church of the 26 Japanese Martyrs.

This month, a dozen Christian landmarks in Japan—where just 1 percent of the population claims Christ—have been officially recommended to be named World Heritage sites.

Spanning across the Nagasaki and Amakusa region, these sites represent places where believers during the Tokugawa shogunate (1630-1867) suffered the harshest persecution and martyrdom in the Asian nation’s history.

The list includes the Oura Cathedral in Nagasaki, which memorializes 17 Japanese Christians and 9 European priests who were crucified at the order of the ruler; Hara Castle in Minamishimabara, a battlefield during the uprising when Catholic rebels were massacred, their leader beheaded, and their faith banned; and other “hidden Christian” sites, where Christ-followers carried on their beliefs in secret for hundreds of years.

These landmarks, if granted recognition by the United Nations Educational, Scientific, and Cultural Organization (UNESCO) next month, would join 14 other cultural World Heritage sites in Japan and over 800 around the world.

Japan’s recommendation comes five years after local leaders submitted the Christian sites for consideration. The country learned in early May that an advisory panel, the International Council on Monuments and Sites, had endorsed the “hidden Christian” sites for inclusion on the World Heritage List; the final decision will come out of a UNESCO meeting in late June.

“This recommendation by the Japanese government on hidden Christian sites is significant for several reasons,” said Makoto Fujimura, who engages Shusaku Endo’s novel on persecution in 17th-century Japan in his own book about faith in the midst of suffering, Silence and Beauty.

“First, it recognizes the centrality of hidden Christian history in Japanese soil, affirming the instinct of [Endo] whose book Silence has been a significant contributor of Japanese understanding of her own history,” he told CT. “Second, it accentuates the cultural value of the resilience of Christianity even under many years of persecution.”

While World Heritage sites often showcase masterful creativity and significant cultural contributions—areas of national pride and popular tourist attractions—UNESCO also awards the designation to locations that “bear a unique or exceptional testimony” to a particular tradition.

The Christian tradition, of course, centers around the testimony of Christ’s resurrection and the redemptive power of suffering. Such resilience and redemption is poignantly and tragically reflected in the church’s historical markers in Japan.

As one Catholic leader put it, “We claim the places where our faith was greatest and erect the world’s most beautiful art and places of true worship.”

Silence, Endo’s book that was turned into a 2016 Martin Scorsese movie of the same name, portrayed the otherwise little-known story of 17th-century Portuguese priests on mission among the “hidden Christians” of Japan. Authorities demanded they recant their beliefs or be tortured and killed; fellow Christians were “burned on pyres, scalded with hot water, hung upside down, beheaded, drowned, hung on crosses on the beach and battered by high tide.”

Nicknamed the Rome of the Far East, Nagasaki pays tribute to this era of church history. The city is home to one of the first churches constructed after the ban on Christianity was lifted, Urakami Cathedral, as well as a memorial to the 26 martyrs and a museum dedicated to the history of Christian persecution, which just opened this year.

“As the real Rome, here in Urakami especially, it is the site of the greatest of Christian persecutions since the great emperors of Rome brutalized the primitive church,” wrote Shaun McAfee, a Catholic author and blogger living in Japan. “It was here in Urakami that the faith candle was lit in the Far East, and though hidden, was never completely extinguished.”

Like the rest of Nagasaki, the church there also had to rebuild after the notorious atomic bomb that laid the city to ruin in World War II. It has been designated a national pilgrimage site for Catholics.

The current moves to honor the painful history of Christianity in Japan, through UNESCO and the new museum, parallel efforts elsewhere for the church to memorialize and learn from tragic or shameful periods from its past.

A 2017 CT cover story on the legacy of lynching in America previewed the recently opened National Memorial for Peace and Justice, with the late theologian James H. Cone engaging the lynching tree as “a viable reality/symbol for reflection on the cross of Christ.”

Historic churches have also grappled with whether or how to acknowledge past ties to the confederacy, slave-owning leaders, or other figures whose beliefs they can no longer endorse. As CT reported last year:

Some defend the markers as a heritage to celebrate, while others see them as a way to own up to past sins. Rabbis in Germany recently adopted the latter perspective when requesting that churches retain anti-Semitic sculptures tied to Martin Luther. Monuments to the early eras of foreign missions have also been called into question; last year, Williams College made efforts to contextualize the Haystack Monument, which honors students’ call to the global mission field in 1806. Some faculty now fear endorsing “cultural imperialism” associated with such efforts.

In Japan, the landmarks to Christian persecution ultimately point to the faith, strength, and resolve of those who suffered for their beliefs.

“Hidden religious practices were apparently made possible for a long period of time due to tolerance of religions in Japan, despite the suppression of Christianity,” said Japanese history expert Hideo Hattori, who chaired the government to review UNESCO site recommendations, according to Japan News. “Political power can't fully control the human mind. This is indeed the lesson learned from Christian-related sites.”

Why Japan Wants Its Past Persecution of Christians ...