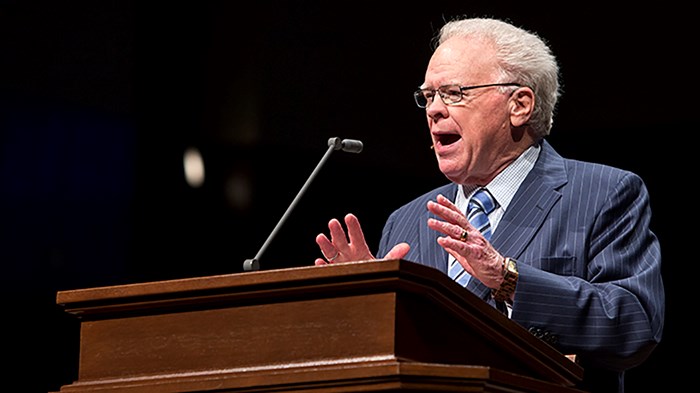 A growing group of Southern Baptist women called for Paige Patterson to be removed as president of Southwestern Baptist Theological Seminary (SWBTS) on Sunday, due to what they claimed was his “unbiblical view of authority, womanhood, and sexuality.”

Patterson, one of the most influential leaders in the Southern Baptist Convention (SBC), has faced widespread criticism in recent weeks for old remarks, including a discussion of divorce in cases of abuse and multiple comments on women’s appearances.

“We cannot defend or support Dr. Patterson’s past remarks,” stated an open letter to SWBTS trustees, which grew from 100 to more than 1,000 signatories on Sunday night. “No one should.

“The fact that he has not fully repudiated his earlier counsel or apologized for his inappropriate words indicates that he continues to maintain positions that are at odds with Southern Baptists and, more importantly, the Bible’s elevated view of womanhood,” states the letter. “The [SBC] cannot allow the biblical view of leadership to be misused in such a way.”

The letter comes from scores of Southern Baptist women, including leaders such as: Karen Swallow Prior, a Liberty University professor and research fellow with the Ethics and Religious Liberty Convention; Lauren Chandler, an author, worship singer, and wife of The Village Church pastor Matt Chandler; Jennifer Lyell, a vice president at SBC-affiliated B&H Publishing Group; Amanda Jones, a Houston church planter and daughter of Bible teacher Beth Moore; and Mary DeMuth, an author, speaker, and victims’ advocate.

Some men also signed on, though the petition is intended for women at SBC churches who affirm the denomination’s complementarian theology.

(Update: An accompanying petition designed for men was released three days later, on May 9. “We are likewise grieved by the comments—heartbroken over the effect they have on our sisters in the faith, concerned about the wrong message they send to the world about the value and dignity of women, and aggrieved by the poor gospel witness,” it read. “We should have noticed this long ago, and we were at fault for ignoring it until our sisters pointed it out.”)

Their plea to the trustees follows Beth Moore’s own viral open letter posted last week, confessing her uncomfortable experiences as a woman in Southern Baptist culture and broadly decrying sexism in the church.

The Patterson controversy escalated quickly the week before SWBTS’s May 4 graduation ceremony, after critics circulated archival clips of the 75-year-old former SBC president and two-time seminary head saying whether a woman should leave an abusive husband “depends on the level of abuse” and that divorce is “always wrong counsel.” The women’s letter also criticized Patterson’s characterization of a 16-year-old girl as “nice” and “built” in a 2014 sermon anecdote.

“This is the most heartbreaking letter I’ve ever signed. I’ve been Baptist most of my life, Southern Baptist for almost two decades,” Prior tweeted. “I made this appeal privately but was not heard.”

The statement coincides with a quiet campaign among some Southern Baptist leaders to pressure Patterson, who has led SWBTS for 15 years and Southeastern Baptist Theological Seminary for 11 years, to apologize and step down. Tonight, the chairman of SWBTS’s board of trustees announced that “in light of recent events,” the full board will hold a special official meeting—at Patterson’s request—on May 22.

Patterson has repeatedly defended himself, most recently tellingThe Washington Post on Friday that he couldn’t “apologize for what I didn’t do wrong.”

A week ago, Patterson released a 600-word response on a Sunday clarifying his older remarks and accusing critics of being motivated by “hatred” and sharing a “deliberate misrepresentation” of his position.

When Patterson stood by his stance—including in a Baptist Press interview where his quote downplaying “non-injurious physical abuse” ended up being revised after publication—fellow Southern Baptists came out with strong statements against domestic violence.

Some Southern Baptists are also anticipating pushback among denominational representatives at its upcoming annual meeting, where Patterson is scheduled to preach.

Before Patterson led what now rank as the second- and third-largest seminaries in the US, he was best known as the leader who spearheaded the denomination’s Conservative Resurgence, a decades-long effort to replace liberal-leaning leaders in the SBC with conservative ones. SWBTS has also been significantly shaped by his leadership, right down to a series of stained glass windows on campus that portray prominent forces in the Conservative Resurgence, including Patterson himself.

He has been a big enough name among Southern Baptists that he was often celebrated for his leadership but didn’t face significant pushback for controversial remarks or stances over the years, wrote Ed Stetzer, executive director of the Billy Graham Center at Wheaton College, on his CT blog. He praised Patterson’s legacy at length, but called for the SWBTS president to step down for the good of the denomination.

Patterson even joined his own seminary in releasing a statement on abuse.

Wade Burleson, an Oklahoma pastor who previously served as a trustee for the SBC’s International Mission Board, has been vocally critical of Patterson and certain denominational policies on his blog. Following reports of deliberations among SWBTS trustees on Wednesday, he hoped and predicted younger trustees would outweigh the seminary president’s loyalists.

“They comprehend the optics. They are not blinded by loyalty,” Burleson wrote. “They understand that the [SBC]—and especially [SWBTS]—cannot survive the image of thousands of Southern Baptists standing and applauding Dr. Paige Patterson at this year’s convention.”

Patterson is slated to give the high-profile “convention sermon” at the SBC’s annual meeting next month in Dallas, in addition to offering reports on an evangelism task force and the state of his seminary.

Despite recent decline, the SBC remains America’s largest Protestant denomination by a wide margin. But in recent years, convention leaders have shown increasing attentiveness to outside perceptions on gender and race issues—particularly as social media followers and institutional heads look to public leaders to be accountable, in real-time, for regrettable remarks and decisions.

“The world is watching us all, brothers. They wonder how we could possibly be part of a denomination that counts Dr. Patterson as a leader,” states the women’s open letter. “They wonder if the Jesus of the Bible is like such men. We declare that Jesus is nothing like this and that our first duty as Southern Baptists is to present a true picture of Jesus to the world.”

Patterson has drawn support from other leaders such as past SBC president Johnny Hunt, who thanked him for having “always proven to be a Man of God and a man of your word in the 40 years I have known you.” A petition in the seminary president’s favor went up over the weekend, blaming “outside sources” such as the media for trying to discredit Patterson’s ministry.

Dwight McKissic, an African American Southern Baptist pastor who often critiques the “SBC mainstream establishment,” asserted earlier in the week that Patterson is “the most loved and loathed personality in SBC history … without a doubt.” Then he laid out his case for why Patterson’s remarks, while worthy of critique, should not disqualify him the seminary president from his leadership role or from speaking at the SBC annual meeting.

To retroactively punish Dr. Patterson for remarks he inarticulately and wrongly made years ago is unfair in my judgment and not a way to treat a modern day patriarchal figure in SBC modern history,” wrote McKissic. He explained:

Which one of us, who’ve been preaching any length of time, could be subject to someone pulling a tape/video from the archives of something we’ve said many years ago; but we would not say the same thing today, or certainly, not in the exact same way. Yet, if brought to public light today, it would create for us a similar PR crisis?

Again, that’s not to excuse, or agree with, what Dr. Patterson unwisely spoke (in my judgment); it’s to say, “The punishment is much greater than the crime.” Let the SWBTS Trustees rebuke Dr. Patterson for his remarks, if they must. Let the SBC in session adopt a strong statement making it crystal clear that we do not support spousal abuse of at any level of gradations—Period—if we must. But to punish and embarrass him on the Convention floor, a venerated figure like Dr. Patterson, by denying him a well-earned slot of being the Annual Convention preacher in the sunset of his life and ministry, is simply overkill. Separate the punishment from the sermon.

Beth Moore’s open letter to her Christian “brothers” on her Living Proof Ministries blog on Thursday explained her experience of being a conservative Southern Baptist woman called to teach other women yet being disrespected by male leaders—or as she put it, being “the elephant in the room with a skirt on.”

“I accepted the peculiarities accompanying female leadership in a conservative Christian world because I chose to believe that, whether or not some of the actions and attitudes seemed godly to me, they were rooted in deep convictions based on passages from 1 Timothy 2 and 1 Corinthians 14,” she wrote.

“Then early October 2016 surfaced attitudes among some key Christian leaders that smacked of misogyny, objectification and astonishing disesteem of women and it spread like wildfire. It was just the beginning,” she wrote. “I came face to face with one of the most demoralizing realizations of my adult life: Scripture was not the reason for the colossal disregard and disrespect of women among many of these men. It was only the excuse. Sin was the reason. Ungodliness.”

She gave an example:

About a year ago I had an opportunity to meet a theologian I’d long respected. I’d read virtually every book he’d written. I’d looked so forward to getting to share a meal with him and talk theology. The instant I met him, he looked me up and down, smiled approvingly and said, “You are better looking than _________________________________.” He didn’t leave it blank. He filled it in with the name of another woman Bible teacher.

She asked that complementarian male leaders have an “increased awareness of some of the skewed attitudes many of your sisters encounter,” and that they “would simply have no tolerance for misogyny and dismissiveness toward women in your spheres of influence.”

Her tweet drew more than 1,000 comments, including affirmation from other conservative women leaders such as Hannah Anderson, Trillia Newbell, Prior, and Jen Wilkin.

Later that day, Gospel Coalition-affiliated pastor Thabiti Anyabwile published an “apology to Beth Moore and my sisters,” asking their forgiveness for having “picked up the attitude—the patronizing and chauvinistic attitude—of some professing ‘complementarians.’” He acknowledged scoffing at and being suspicious of women in ministry and encouraging others to do the same, passing on a “sinful attitude rooted in the very misogyny and chauvinism you describe in your post.”

“I do now commit to being a more outspoken champion for my sisters and for you personally. Not that you need me to be but because it is right,” he wrote. “I hope, with God’s help, to grow in sanctification, especially with regards to any sexism, misogyny, chauvinism, and the like that has used biblical teaching as a cover for its growth.”

Many observers will be paying attention for what happens next, particularly at the seminary trustees meeting in May and the denominational conference in June.

“Ultimately, we trust the SBC…. When our leaders make mistakes, I think there are appropriate channels to respond,” said Jim Richards, executive director of the Southern Baptists of Texas Convention, in an interview with CT.

Correction: An earlier version of this blog incorrectly stated that Mary DeMuth did not attend an SBC church.