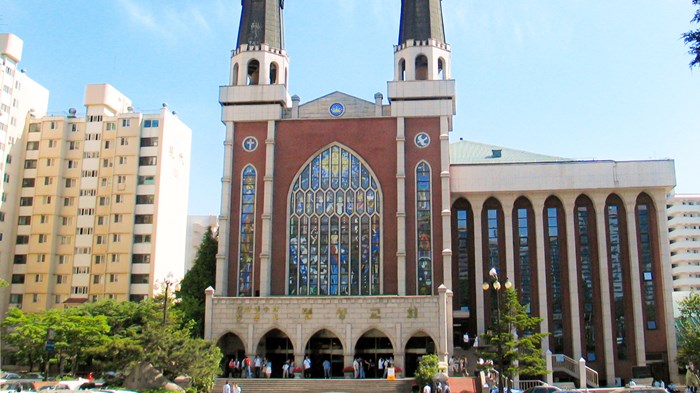 “You’ve heard that our church is very big. Very large,” said the pastor emeritus of the world’s largest Presbyterian church at the 2018 commencement of Gordon-Conwell Theological Seminary. “I and my colleagues at our church worked together and practiced exactly what American missionaries taught us,” continued Kim Sam-whan, who in 1980 founded Myungsung Presbyterian Church in Korea with 20 members.

Today, Myungsung claims more than 100,000 members, and its footprint extend beyond its main Seoul sanctuary with its two towering spires. The church owns and operates an evangelical television channel, two schools, the first and only private prison in Korea, and hospitals in Korea and Ethiopia.

However, the megachurch and its denomination have been fractured after the 74-year-old Kim gave his senior pastor position to his 46-year-old son in 2017.

Next week, the court of the Presbyterian Church of Korea (PCK-TongHap), one of the largest of Korea’s more than 100 Presbyterian denominations, is scheduled to announce its decision July 16 on whether the accession of Kim’s son, Kim Ha-na, is valid.

The crux of the debate is Article 28.6 of the PCK-TongHap constitution, which prohibits the transference of pastor or elder positions to family members. Defenders argue that Kim Ha-na was elected in accordance with Myungsung’s laws, and the denomination that Kim Sam-whan once headed should not meddle in the megachurch’s affairs. Critics argue that the denomination’s flagship church is flouting the corporate laws it must heed.

“Hereditary succession is a major issue in Korea because the world’s first major wave of megachurches was birthed in Korea,” said Warren Bird, megachurch researcher and co-author of Next: Pastoral Succession That Works.

Today, South Korea is home to 3 of the 10 largest Protestant churches in the world, according to Leadership Network’s current database. The East Asian nation also has more than 15 “gigachurches” (ones with more than 20,000 members)—the most in the world, followed by Nigeria and the Philippines.

About 1 in 10 megachurches worldwide see their outgoing lead pastor succeeded by a family member, according to Bird. The Alliance Against Church Inheritance, a Korean parachurch group, reports that since 2013, more than 140 Korean churches have handed their pulpits over to a family member of the senior pastor.

In the United States, pastoral succession within families is a common practice—and often a successful one. For example, America’s largest church—Lakewood Church where some 50,000 gather every Sunday to worship at the former arena of the NBA’s Houston Rockets—is led by Joel Osteen, the son of founder John Osteen. In Virginia, Jonathan Falwell inherited his renowned father’s Thomas Road Baptist Church after Jerry Falwell passed away in 2007.

But at times, father-son successions fail. For example, televangelist Robert H. Schuller’s Crystal Cathedral declared bankruptcy in 2010 and sold its iconic postmodern sanctuary in the Los Angeles suburbs after a few years under his son, Robert A. Schuller.

“The downsides of transition are the same, whether it’s a family member or not,” said Nick Floyd, who was elected senior pastor of Cross Church in Arkansas this past April after his father, Ronnie Floyd, left his megachurch of 33 years to become president and CEO of the Southern Baptist Convention’s Executive Committee.

“Sometimes people expect you to be like the pastor before you, and that’s understandable. Our people here at Cross Church have been very gracious in this respect and are allowing me to be me,” said Nick Floyd, who helped launch Prestonwood Baptist Church before joining Cross Church as a pastor in 2011.

The ecclesiastical tensions in Korea escalated after the 2014 death by suicide of a Myungsung elder who managed the church’s finances, as well as a 2018 investigative report by a leading Korean broadcaster, MBC, alleging that Myungsung founder Kim Sam-whan had embezzled church funds.

In 2014, the Myungsung elder—who lived in an apartment across from the church—jumped off his building. His suicide note described more than $70 million in bank accounts managed solely by himself and Kim Sam-whan, as well as a list of Myungsung real estate across Korea worth more than $140 million.

In 2017, the Seoul Eastern District Court essentially sided with reports of Myungsung’s slush fund by declaring that the journalists who had been sued for libel by Kim Sam-whan were not guilty. Last month, a memorial service marking the fifth anniversary of the Myungsung elder’s death was held outside the church.

“Most Korean megachurches are not transparent at all,” said Oak Sung-deuk, professor of Korean Christianity at UCLA. For example, in 2014 the founding pastor of the world’s largest church—Seoul’s Yoido Full Gospel Church, which claims about a million members—was convicted of embezzling $12 million (though supporters blamed the trouble on his “prodigal” son).

Earlier this year, members of Seoul Presbyterian Church (SPC) disaffected with their current senior pastor gave broadcaster MBC evidence of more than 400 church bank accounts worth millions of dollars that were previously unknown to the megachurch’s board. Splintered for three years over the succession of its previous senior pastor, SPC also awaits a ruling from the same PCK-TongHap court as Myungsung. (PCK-TongHap is a moderate denomination claiming almost 3 million members, rivaled only by PCK-HapDong, a conservative denomination also claiming almost 3 million members.)

In 2013, the 98th General Assembly of PCK-TongHap banned the hereditary succession of church leadership when it passed Article 28.6. In 2014, Myungsung founder Kim Sam-whan planted another church, New Song Myungsung Church, three miles from his megachurch and appointed his son as its leader.

A year later, Kim Sam-whan stepped down as senior pastor but still preached every Sunday as the pastor emeritus. In 2017, Myungsung passed a motion to merge with New Song Myungsung Church, and Kim Ha-na was appointed the new senior pastor of Myungsung.

The Southeast Seoul Presbytery of PCK-TongHap approved Kim Ha-na’s appointment in 2017, and the denominational court upheld this decision by a thin margin of 8-7 last August. In response, more than half of the professors at Presbyterian University and Theological Seminary, the denomination’s flagship seminary in Seoul, signed a statement criticizing the ruling. Meanwhile, 900 of the denomination’s 18,000-some pastors publicly censured Myungsung.

“Pastor Kim Sam-whan, please quietly leave PCK,” Kim Ji-chul, former senior pastor of Somang, one of the denomination’s other megachurches, posted on his Facebook after the court sided with Myungsung last year. “Only then can Korean churches recover. Only then can seminaries live.”

During the 103rd General Assembly held last September, hundreds of Myungsung members and hundreds of PCK-TongHap seminary students held competing protests outside. When the denomination’s constitution committee presented its interpretation of Article 28.6, which was favorable to Myungsung, two hours of ensuing debate resulted in a vote of 849 representatives disagreeing with the committee and 511 agreeing with it.

The next day, the new head of the PCK-TongHap court agreed to reappoint its 15-member committee, as some members had ties to Myungsung. Last December, the court agreed to revisit the case, and announced last month that it will declare its decision on July 16.

Oak, the UCLA professor, predicts that Myungsung will most likely leave PCK-TongHap and either form a new denomination or join one called the Independent Church Network. “Myungsung can do anything with [its] money and network,” Oak said. “Both Myungsung and PCK will suffer, but Myungsung will suffer more because many of its members will leave.”

Spokespersons for both Myungsung and PCK-TongHap did not respond to CT’s requests for comment.

According to Oak, the legacy of millennia-old Confucianism and decades-long Japanese colonialism made family inheritance of churches common in Korea, similar to the inheritance of family businesses. Although father-son transfers of church leadership did not spark controversy until the 1980s, the increasing difficulty of establishing new churches in Korea and the immense growth of its megachurches have made family succession increasingly unpopular since the 1990s.

William Vanderbloemen, founder and CEO of a Christian executive search firm, believes churches should benchmark the best succession practices of businesses. Regardless of whether a successor is a family member, he said, pastor successions are most successful when “governance rules have not been broken, the congregation is not surprised, and the candidate is good at the job.”

His firm, Vanderbloemen, has worked with more than 1,000 churches, and will soon launch a division that focuses solely on family transitions in churches and Christian organizations. He pointed out that whereas mainline denominations like Presbyterians tend to be wary of family succession, charismatic traditions are more receptive to sons carrying on their fathers’ ministries.

“Although Jesus and the New Testament Church elevated character over bloodline in commissioning the next generation of leaders,” said megachurch scholar Bird, “certain family connections were blessed by God, such as Jesus’ half-brother James leading the Jerusalem church.”

“Likewise today, succession sometimes works well for a family member who grows up in a church, embraces its vision, possesses the gifts, receives mentoring, and creates an environment where non-family members can thrive.”