Bethany Christian Services pledges to keep recreation and education offerings for unaccompanied minors in its care, even if federal funding goes away.
Bekah McNeel|June 10, 2019 12:14 PM 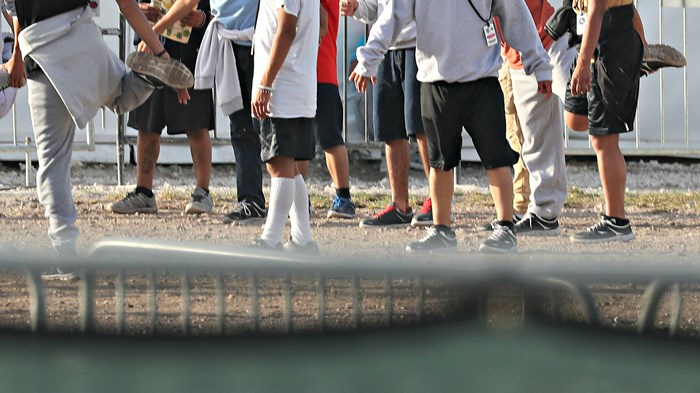 As the federal government threatens to stop funding English lessons, soccer games, and other programs deemed “not directly necessary” for migrant children in US care, Christian groups have defended the crucial role of these activities and pledged to keep them going for kids whose lives have been turned upside down by instability.

“These services are a child’s basic right and vitally important to the health and development of these children,” said Dona Abbott, vice president for refugee and immigrant services at Bethany Christian Services (BCS), which cares for around 200 unaccompanied minors in five states.

The Michigan-based evangelical adoption and foster agency said in a statement that it plans to continue privately funding “recreational or educational activities for unaccompanied minors in our care” if the government withdraws its support.

Last week, the Washington Post reported on Trump administration plans to end funding for educational offerings, recreational activities, and legal aid services for unaccompanied immigrant minors. The US Department of Health and Human Services later classified those services as “not directly necessary for the protection of life and safety.”

State governments and Christians working with unaccompanied minors have pushed back against the decision, and HHS filed a request for $3 billion to keep the migrant shelter program funded beyond June, when it is set to run out of money, Abbott told Christianity Today.

Unless additional funding comes through, the federal agencies must scale back on non-essential services to avoid spending beyond their congressional allotments. However, the obligations of government contractors—like BCS, which partners with the Office of Refugee Resettlement to place children in foster and group homes—may not be determined by budget alone.

Advocates say defunding certain services could violate the Flores Agreement, a 1997 court settlement that dictates the conditions under which unaccompanied minors from other countries can be detained and held in the US. In addition to the Flores Agreement, BCS must comply with the laws in states where they provide immigrant housing and foster care services, some of which require schooling and recreation.

“Our country has always prioritized the needs of children,” Abbott said, lamenting the wellbeing of vulnerable children hanging in a precarious political balance. “They’re not the cause of the problem.”

Many Christian relief efforts for immigrants and refugees center around educational and health services. World Vision, Samaritan’s Purse, and Save the Children run care facilities called child-friendly spaces for children around the world displaced by conflict, natural disasters, or oppression.

These centers are designed to teach them about the resources available in their new cities or countries, offer support, and sometimes continue their education.

“Giving them a safe space to play, to learn, to be a child, helps reconstitute themselves, to build confidence,” said Ken Isaacs, Samaritan’s Purse’s vice president of programs and government relations, in a 2018 CT article about the role of play in trauma recovery.

In addition to the basic necessities, children need “psycho-social activities, an encouragement, a hug,” he said. “They need to know there’s going to be a tomorrow.”

World Vision spokesperson Perrise Thomas similarly called playtime “a significant factor in psychosocial health, especially where the external environment is threatening/uncertain.” While World Vision’s child-friendly spaces are outside the US, asylum-seeking children experience similar trauma along their journey and uncertainty upon arrival.

BCS holds contracts with the Office of Refugee Resettlement to care for unaccompanied minors in five states: Michigan, Florida, Tennessee, Maryland, and Indiana. It is working toward extending the program into New Jersey and Pennsylvania.

Most of the immigrant children in BCS care—around 200 at any given time, Abbott said— are placed in transitional foster homes, which serve as short-term housing for the very young, medically fragile, pregnant teens, or children with diagnosed disabilities.

The practice of placing immigrant children into foster care, and BCS’s role in the immigration system, came under scrutiny during the 2018 family separation crisis when the Trump administration’s “zero tolerance” policy led to more than 2,600 immigrant children being taken from their parents at the border. For some families, reunifications took months, with documented cases of parents being deported while their children remained in shelters or foster care.

At the time, Christian leaders involved with the Evangelical Immigration Table and the National Association of Evangelicals spoke out against the policy, urging the administration to prioritize family unity.

While the administration claims that family separations have stopped, young children are still going into foster care after being separated from the guardians who brought them across the border, according to a ProPublica investigation. Most of the time, children are taken from family members because of the parents’ suspected gang affiliation or criminal background.

Whenever possible, Abbott said, smaller, more supervised placements are preferable, and foster care is ideal, because of the one-on-one attention children receive. However, the US foster care system is already strained, there are not nearly enough placements for every unaccompanied minor seeking asylum.

“It really calls on the faith community to step up to volunteer to foster and foster more frequently,” Abbott said.

According to BCS, nearly all of the immigrant children it cares for—97 percent—are in foster homes for fewer than two months before leaving the system to be placed with sponsors. To leave detention, they must have a US resident sponsor, often a family member. The children can be sent to their sponsor with or without the adult who brought them into the US.

Because the transition period is so short, most children placed with BCS do not require legal services; their immigration hearings are not imminent. But for the 3 percent who remain in foster care, BCS continues to work with foster families to ensure that the children have access to whatever services they need, including immigration attorneys.

The organization does screen children for educational placement, mental health, and physical health. Most asylum-seekers have had multiple interruptions to formal schooling. The months of travel from their home country to the US often follow years of interruptions as parents feared sending their children to school in regions where gangs, drugs, and violence lay in wait.

Children leave BCS with the assessments and documents they need to present to public schools in their new home cities, Abbott said, and the transition to their sponsor is usually a smooth one.

“When people flee, they often will flee to a place where they feel they have a connection,” Abbott said, her goal is that the children make that connection. They are always aim to unite kids with family—whether sponsors or the relatives they arrived with in the US.

In addition to foster services, BCS runs group homes for a smaller number of teens aged 14 and up in California and Michigan. Group homes could also be part of its extension in Pennsylvania. These facilities house about 18 minors each, with round-the-clock supervision. They are usually used for older teens who need more care than is available in large shelters. Education and recreation services are provided on site.

“Because their situation is unknown, HHS feels that these children should be in a more supervised setting,” Abbott said.

State law in Michigan and California stipulates that BCS must provide educational and recreational services through the group homes in order to keep their license. If HHS doesn’t provide funding, it’s up to the nonprofit itself.

But really housing children without education or recreational services should be universally anathema, Abbott said, “We can’t imagine a world where children shouldn’t have access to that.”