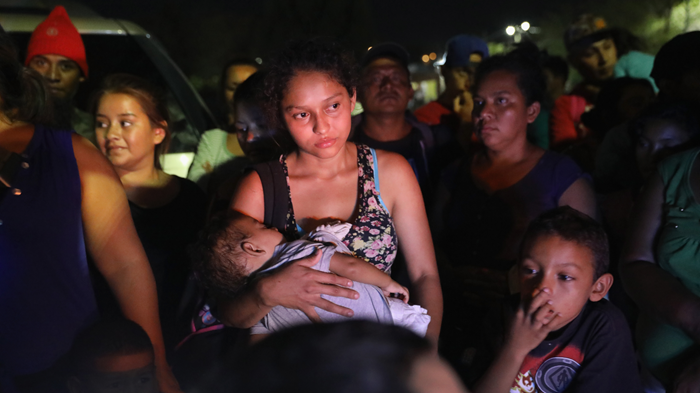 “I have put in place a ‘zero tolerance’ policy for illegal entry on our Southwest border. If you cross this border unlawfully, then we will prosecute you. It’s that simple,” he said on Monday in San Diego, where a caravan of migrants, many of them mothers and children, had arrived a week before.

“If you are smuggling a child, then we will prosecute you and that child will be separated from you as required by law.”

Though families seeking asylum had previously been allowed to stay together, under the new policy, adults are to be detained while they apply and await review, while their children could spend years in shelter care in the US, The Hill reported.

“If law requires this, it must be changed,” tweeted Robert P. George, a Catholic, legal scholar, and the former chairman of the US Commission on International Religious Freedom. “Sometimes it’s necessary to separate children from parents. But where it’s not necessary to do that, it’s necessary not to do it. Find another way.”

Last week, as news of the government’s proposed restrictions circulated, World Relief—the humanitarian arm of the National Association of Evangelicals—reiterated the importance of family unity in a statement to CT:

World Relief urges our decision makers to continue to allow those fleeing violence and persecution to claim asylum in the United States. The way we treat asylum-seekers is proof that we can be a nation of laws and a nation of grace.

The US government should do everything in its power to keep arriving families together, not separate them.

“What we currently have are laws that encourage the dissolution of the family before immigrants leave their country of origin or likewise threaten to tear them apart once they are here illegally,” said Rodriguez (who also serves as a CT board member).

“An example of the former [is] when struggling families send their underage children to cross the border assuming they’ll successfully be granted asylum because of their age. A parent who wants the best for their child might do that thinking they’ve done something positive, but we just inadvertently incentivized a family to break apart.”

The US saw all immigration through the southern border drop when Trump took office, since the president famously campaigned on tougher restrictions, including a proposed wall between the southwestern states and Mexico.

Early into his presidency, border-crossing attempts fell to their lowest levels since the 1970s, but immigrants—many of them fueled by ongoing unrest in Central America and desperate for asylum—have begun to make their way into the States again. The Washington Post reported last month that apprehensions along the border tripled in the past year and rose by 37 percent from February to March, the largest monthly increase since 2011.

As immigrants and asylum-seekers return, incidents of family separation also continue to rise. The New York Times places that number at 700 children separated from adults claiming to be their parents in the past seven months, with at least 100 under age four, based on data from the Department of Health and Human Services’ (HHS) Office of Refugee Resettlement.

A majority of all Christians—including 56 percent of white evangelicals—believe the government should support unaccompanied minors rather than deporting them, a 2014 PRRI survey found.

During the surge in unaccompanied minors around 2014, churches and groups like the National Latino Evangelical Coalition (NaLEC) partnered with HHS to house, clothe, and care for about 600 children who ended up in the custody of an overwhelmed system.

Already, migrant kids fear they will be going to jail for coming into the United States. Lisa Vega, whose Florida church housed unaccompanied minors through NaLEC’s two-year government subgrant, remembers having to assure the scared, hungry children with only a Ziploc bag full of belongings that they would not be punished for fleeing.

“As far as the government is concerned, I think they should be giving churches more opportunities to care for this population. The church just needs to open up their doors,” said Vega, senior pastor at Ignite Life Center church in Gainesville, where they housed 5 to 20 Central American children at a time.

“If we care about them abroad, we shouldn’t stop caring about them when they enter our borders.”

The conditions forcing them to leave their Central American homelands will sound sadly familiar. Gang killings, corruption, and trafficking in El Salvador, Guatemala, and Honduras—known as the Northern Triangle—place them among the most violent countries in the world. And in recent weeks, Nicaragua suffered its deadliest bout of protests since 1990.

While immigration from Mexico has stalled, the influx from Northern Triangle nations continues to grow, Pew Research Center reported last December, with many entering illegally or with temporary protections. These Central American countries also represent the most Protestant nations in Latin America.

“The situation in the countries these Christians are fleeing have not improved. Until we address the issues of violence and poverty, this is going to be cyclical,” said NaLEC president Gabe Salguero, whose organization advocates for humanitarian care for immigrants to the US while also supporting efforts by the Latin Evangelical Association (AEL) and Evangelical Association of Honduras to strengthen the church’s response back home. “It’s not an either-or. It’s a both-and.”

Rodriguez, of NHCLC, also points Christians to pray against violence and oppression that are sending scores of immigrants out of Central America.

“A thriving church will bring healing to these societies from the inside out, and so we must pray for the church,” he said. “There is a hunger for Christ that is palpable, and many people are coming to faith both in Latin America as well as in the US.”

Rondell Treviño, a Presbyterian minister and founder of The Immigration Project, said the migrant caravan at the California border could offer an opportunity for pastors to address the implications of immigration policy.

“Christians do not hesitate to affirm that there is a strong biblical basis for family unity,” he said. “Therefore, when there are policies focused on separating families, then this should deeply disturb the church.”

Reports on the new border-crossing policy raise concerns over family unification, even if detained parents are eventually granted asylum. About 20 percent of unaccompanied minors in HHS custody between October 2016 and December 2017—1,500 children—ended up getting lost in the system, according to a Frontline investigation.

Weeks after the announcement of the new policy, the leaders of the Evangelical Immigration Table wrote President Trump to challenge the move, urging the goverment to “protect the unity of families” by separating children “only in the rarest of instances.” The full text of their June 1 letter, which fellow Christians are invited to sign, appears below:

As evangelical leaders representing tens of thousands of local churches, campus communities, and ministries we are concerned that the new “zero tolerance” policy at the U.S.-Mexico border, recently announced by Attorney General Sessions and being implemented by the Department of Justice and the Department of Homeland Security, has had the effect of separating vulnerable children from their parents. As head of the Executive Branch of the federal government, we are writing to ask you to resolve this situation of families being separated that you have rightly described as “horrible.”

As evangelical Christians guided by the Bible, one of our core convictions is that God has established the family as the fundamental building block of society. The state should separate families only in the rarest of instances. While illegal entry to the United States can be a misdemeanor criminal violation, past administrations have exercised discretion in determining when to charge individuals with this offense, taking into account the wellbeing of children who may also be involved. A “zero tolerance” policy removes that discretion—with the effect of removing even small children from their parents. The traumatic effects of this separation on these young children, which could be devastating and long-lasting, are of utmost concern.

U.S. law currently allows individuals with a credible fear of persecution to request asylum whether the individual enters with a valid visa, requests asylum at a port of entry, or is apprehended seeking to enter without a visa. Not every individual arriving will merit asylum protection, but we would ask that families be kept together while ensuring each individual asylum seeker is afforded due process according to our laws.

We are also concerned that there are fewer legal possibilities for those with a well-founded fear of persecution to be considered for refugee status without needing to make it to the U.S. border. The U.S. Refugee Resettlement Program has allowed many fleeing persecution in Central America and elsewhere to register as refugees abroad and be thoroughly vetted before coming lawfully to the U.S. However, with significantly fewer refugees being admitted in recent years, there are fewer options for those fleeing persecution. Those facing legitimate threats to their lives often feel they have no choice but to leave their countries and seek asylum elsewhere.

We respectfully ask you to work with Attorney General Sessions and Secretary Nielsen to reverse this “zero tolerance” policy and instead urge law enforcement entities to exercise discretion to protect the unity of families. We also ask that you work with the U.S. State Department to resume a robust U.S. refugee resettlement program and to leverage U.S. influence to seek peaceful resolutions to the situations of violence in Central America.

We appreciate your attention to these urgent matters and your service to our country. We continue to pray for you and for all who serve in your administration.