Officials say undergrad enrollment in the program is dropping as students take a more holistic approach to ministry.
Kate Shellnutt|June 20, 2019 08:00 AM 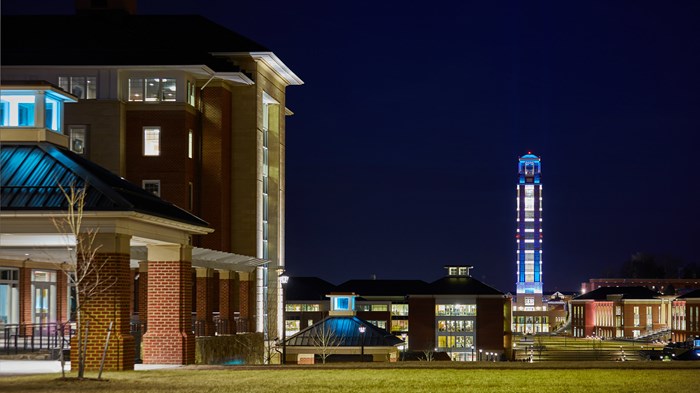 Image: Courtesy of Liberty University
The Rawlings School of Divinity is housed at Liberty's Freedom Tower.

Thanks to its pioneering online education platform, Liberty University offers the largest theological studies program in the country—by far. Its Rawlings School of Divinity enrolls several times as many students as longstanding seminaries, which have only recently begun to transition their degree programs online.

And Liberty’s divinity school, housed in a tower erected in the center of the Lynchburg, Virginia, campus, is also on its way to accreditation with the Association of Theological Schools (ATS), the gold standard for seminaries in the US and Canada.

But a new report this week in Inside Higher Ed describes the decision to cut a dozen divinity school faculty, its falling enrollment, and a new strategy to combat what it refers to as Liberty’s broader “struggles online and a shrinking applicant pool.”

Top officials at the school dispute claims that the university is on a trajectory of decline, especially one stemming from its ties to President Donald Trump.

Instead, they told Christianity Today that the layoffs and other hits taken by the divinity school stem from the evolving ministry landscape, the same kind of challenges faced by fellow Christian universities, missions organizations, ministries, and churches across the country—and that the Trump affiliation has actually been a boon to the school.

“Really, it’s a sign of the times,” said David Nasser, senior vice president for spiritual development and campus chaplain at Liberty. “The landscape of the way churches are staffing is changing, the landscape of the way mission organizations are staffing is changing, and I think that’s why we’ve seen some decline in the school of divinity in that sense.”

Officials at Liberty said while graduate-level applications to the divinity school have climbed over the past few years, resulting in steady enrollment in its master’s and doctorate programs, interest on the undergraduate side has declined.

The divinity school offers 11 bachelor’s degrees in more than 40 specializations, from “pastoral leadership” to “sports outreach.” But a new generation of Christian students, administrators say, take a more holistic view, seeing theological education as preparation for their future careers across fields, not necessarily in full-time ministry positions.

They plan to reconfigure the divinity school since it has become a more popular option for undergrads as a double major, minor, or concentration with other paths of study, rather than as a stand-alone major.

“We’re trying to make wise business decisions that set the school of divinity up for success long-term and make it a sustainable entity long-term.”

A few current faculty members declined to comment to CT regarding the recent cuts in the divinity school. A 2018 graduate called the changes “eyebrow-raising” since “they’re cutting at the core of what Liberty is supposed to be.”

Houston pastor Garet Robinson, who holds three degrees from Liberty, including a PhD from its divinity school, tweeted about a sense of intimidation on campus.

“The disconnect between executives at LU & the faculty is significant & severe. As an alum, I don’t trust the executives at LU to understand what it takes to do theology education,” he said.

“So many would like to voice their disapproval of leadership but fear for their families, their jobs, & their peers. Perhaps some of us can be a voice for them, or at least help make others aware of the problem. More than this, praying for them is just as important.”

Liberty leaders told CT they did not recognize any tension, but instead felt a healthy degree of engagement with faculty and staff, with provost Hicks saying, “I think they’re completely comfortable with what we’re doing.”

For the past few years, Liberty president Jerry Falwell Jr. has been known for his friendly relationship with and outspoken defense of President Trump, and some have speculated that his coziness around the controversial president will hurt Liberty in the long-term.

“The Trump era has actually launched Liberty University onto the national stage in many ways that have been very beneficial,” said university spokesman Scott Lamb. “LU is thriving in ways it really couldn’t have without the prominence that came from that President Trump factor.”

The school recently received a record-setting gift—$100 million from a single donor, he said.

“I'm sorry some of the divinity faculty were not renewed. They're not the 1st department this has happened to - cuts happen for various reasons. I also get a year to year contract & accept those knowing each one may be my last,” she said on Twitter—referencing Liberty’s policy of offering annual contracts rather than faculty tenure (by some estimates, about a third of Christian colleges do not offer tenure).

“The cuts are hard and they're sad, but they do not indicate that the school is going downhill as some claim and (sadly) want to be true. Liberty University remains a strong Christian institution with amazing faculty and awesome students.”

“We continue to be on mission to train ministry leaders at Liberty University,” said Gabe Etzel, the administrative dean for the divinity school. “We have not waivered from that.”

Liberty’s graduate level divinity school enrollment was 4,849 in the fall, according to ATS, more than any other school. Coming in second was the Southern Baptist Theological Seminary, with 3,237 students.

Programs across the country may experience similar enrollment shifts as students are drawn to bivocational or otherwise nontraditional ministry. But the trend is already particularly acute at Liberty, where its massive online student body is made up of people who largely could not afford to quit their jobs, leave their homes, and pay to live on campus while they get their degrees.

Gordon College, an evangelical liberal arts college with a student body of just under 2,000, announced in May that it would be consolidating majors and cutting positions—laying off 17 faculty and staff members—due to a budget reset and shifting enrollment.

These “newly integrated majors” at the Massachusetts college group history, philosophy, and politics; sociology and social practice; and physics, chemistry, and applied sciences. Several other majors will be eliminated, including French and Spanish. Over the past couple years, Gordon has also partnered more closely with Gordon-Conwell Theological Seminary to offer accelerated master’s programs.

Meanwhile, leaders at Liberty say they are planning for the second-largest incoming class in school history. The school has gone back and forth with Grand Canyon University for the title of the largest Christian college. Inside Higher Ed reported that online enrollment fell by over 10 percent between 2015 and 2018, but is expected to recover back to 95,000 this year.