Elizabeth Warren, Pete Buttigieg, and Cory Booker are quoting a lot of Scripture on the campaign trail.
Daniel Silliman|November 20, 2019 09:00 AM 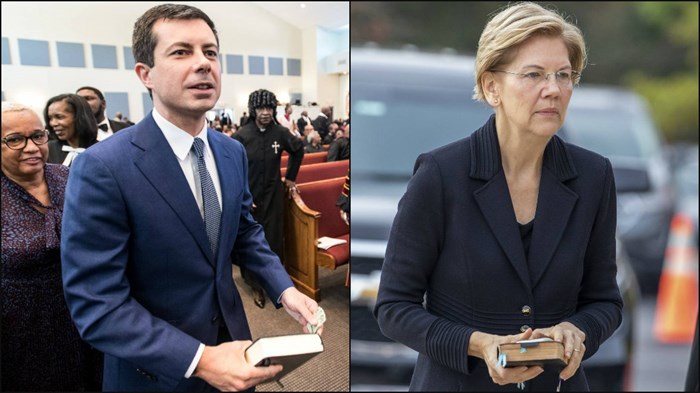 Democratic primary candidates have quoted the Bible more than usual on the campaign trail in 2019. Eight of the top 12 candidates brought up Bible passages while talking about economic reform, welfare policy, and LGBT rights.

Senator Elizabeth Warren often speaks about her time teaching fifth grade Sunday school in a Methodist church, and then launches into an explanation of Matthew 25. “This is the one where the shepherd is dividing the world into the sheep and the goats,” she said at a CNN townhall. “As we all know, sheep are going to heaven and the goats—they’re not!”

Pete Buttigieg, the mayor of South Bend, Indiana, also quotes Scripture regularly. In the first Democratic debate, in July, he referenced Proverbs 14:31: “Those who oppress the poor insult their Maker.” Searches for the verse on Bible Gateway tripled after Buttigieg’s remarks. On the campaign trail, he has also referenced Matthew 6:5, where Jesus condemns the prayers of hypocrites.

Buttigieg, an Episcopalian, told Religion News Service that connecting to people of faith is an important part of his campaign strategy. That comes with risks, though. Buttigieg received a lot of backlash, for example, when he said “there’s plenty of scriptural basis” to support abortion rights.

Senator Cory Booker faced similar negative reactions from people who said he didn’t understand the Bible when he quoted Micah 6:8—which says the Lord wants people to act justly, love mercy, and walk humbly before God—in answer to a question about LGBT rights. Critics said Booker was “twisting Scripture.” Booker’s explanation was that his faith and that verse motivated him to fight against discrimination.

Booker was raised in the African Methodist Episcopal Church and is now a member of the National Baptist Church. He also has deep connections to Judaism and keeps a Hebrew Bible on his Senate desk.

Other candidates, who don’t put so much emphasis on their faith, have also brought the Bible into their presidential campaigns—sometimes in surprising ways. Businessman Andrew Yang, who attends a Reformed Church in America congregation, cited 1 John 3:17—not to be confused with the much more common John 3:16—in support of his signature policy proposal, universal basic income.

“Universal Basic Income is a beginning for followers of Christ,” Yang said, “and all who believe in putting Humanity First, to begin to love our neighbors as ourselves and begin caring for and helping others the way we have been commanded.”

Senator Bernie Sanders, who is a non-practicing Jew, brought a Bible quote when he spoke at Liberty University in the 2016 campaign. He cited Matthew 7:12: “Do to others what you would have them do to you.” He has repeated biblical admonition several times on the campaign trail this year. 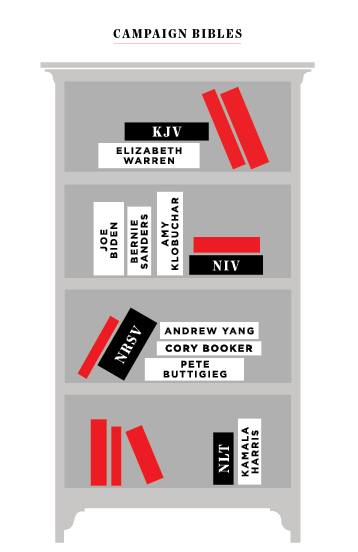 Warren has a stated preference for the KJV. “I confess, I'm a King James fan,” she told NPR in 2013. “I understand the world has moved on, but for me it'll always be with King James.” She’s in good company—the KJV has long been the most-read translation in the country.

Former Vice President Joe Biden has used a Douay–Rheims Bible to take his oaths of office—a Catholic translation that has been in his family since 1893. When Biden quotes Scripture, however, he uses the NIV. Bernie Sanders, Senator Amy Klobuchar, and President Donald Trump also use the NIV, which is the bestselling modern translation.

Buttigieg, Booker, and Yang quote the NRSV, which is the preferred translation of mainline Protestant churches.

Senator Kamala Harris rarely quotes the Bible directly, preferring to paraphrase. In an Atlanta church in 2017, though, she quoted Proverbs 31:9 from the NLT: “Speak up for the poor and helpless, and see that they get justice.”