Searches for the lesser-known verse tripled on Bible Gateway.
Kate Shellnutt|July 31, 2019 11:51 AM 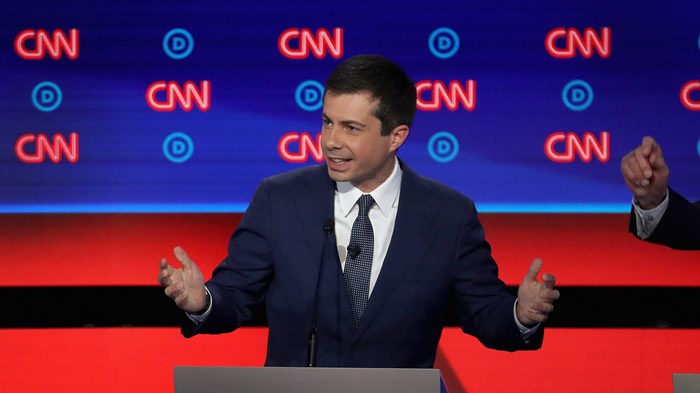 During the first of two Democratic presidential debates on CNN this week, candidate Pete Buttigieg quoted from the Old Testament in his remarks on the economy.

“Minimum wage is just too low,” the South Bend, Indiana, mayor said. “So-called conservative Christian senators right now in the Senate are blocking a bill to raise the minimum wage when Scripture says that whoever oppresses the poor taunts their Maker.”

Believers across the political spectrum pay attention when a candidate evokes Scripture, and searches for Proverbs 14:31 on Bible Gateway tripled after Buttigieg’s remarks.

Even for Christians, the verse does not rank among the most-quoted Proverbs (the top being Prov. 3:5-6, “Trust in the Lord with all your heart…”), and other passages (such as the Sermon on the Mount) tend to come up more regularly when discussing the Christian call to care for the poor.

Just over half of Americans (55%) support raising the minimum wage to $15 an hour, according to a survey by The Hill. Evangelicals watching this week’s debates are about as likely as voters overall (18% compared to 19%) to consider economic policies like wages as the top issue for candidates to address, per a Morning Consult-Politico poll.

Fellow Christians have evoked other passages as a biblical defense of paying workers more generously, with Tim Reinhold of Eventide Funds previously writing for CT: “In Malachi, the Lord warns he will come in judgment against ‘those who exploit workers,’ listing it among the ways people show they do not fear him (3:5). In the New Testament, James 5:4 reads, ‘Look! The wages you failed to pay the workers who mowed your fields are crying out against you. The cries of the harvesters have reached the ears of the Lord Almighty.’”

Andrew T. Walker, senior fellow in Christian ethics at the Southern Baptist Ethics and Religious Liberty Commission (ERLC), tweeted his opposition to Buttigieg’s line: “It never fails to baffle how progressives can appeal to the Bible to arrive at an exact minimum wage ($15, according to Buttigieg), yet ignore, reject, or plead ambiguity on the Bible’s teaching on marriage and abortion.”

Of all biblical genres, wisdom literature uniquely addresses the public square with a kind of applied theology that is relevant to modern political discussions. The teaching found in Proverbs 14:31 reminds us of the close connection between God and the poor in the Bible. The idea is taught in other better-known biblical texts such Exodus 22:22, Deuteronomy 10:18, Psalm 94:6, Isaiah 1:17, and Matthew 25:31–46, but I applaud Mayor Buttigieg’s use of the lesser-read Proverbs passage. Throughout the biblical text, the teaching is clear: The way you treat the poor and the weak says something about your stance toward the creator God in whose image they are made.

… The Proverbs 14:31 principle should inform many of our policy discussions, from national security to immigration, from abortion policy to the minimum wage. Mayor Buttigieg has the right principle in this case, but the precise policy is, as we might say, a matter of debate.

David T. Lamb, MacRae Professor of Old Testament and dean of the faculty at Missio Seminary:

It’s fantastic that during the recent Democratic debate Mayor Buttigieg quoted Scripture (and he assumes we all know the reference; Prov. 14:31a). Christians are far more likely to blame poverty on laziness than on other factors. But as we speak about causes of poverty, we should remember that, while the Bible does warn against laziness (e.g., Prov 24:30–34; 2 Thess. 3:10), it speaks far more frequently about the evil of oppression and the need to be generous.

Generosity is a huge theme throughout Scripture. Even just in the Book of Proverbs we see how God will bless those who bless the poor (Prov. 14:21; 31b; 17:5; 19:17; 21:13; 22:23; 28:8). Whether or not we agree with all of Buttigieg’s policies about how to address poverty, politicians who claim to be Christians (conservative or liberal) should be using more Scripture to shape their views and need to be finding legitimate ways to reduce the rapidly growing income disparity in our supposedly Christian nation.

Although it’s good to see politicians seeking scriptural support for their views, I hope Mayor Buttigieg will continue down this path and do it consistently rather than selectively–especially when it comes to the Bible’s teaching on the protection of the unborn and its definition of marriage.

I’m sure all Christians agree with the moral principle taught in Proverbs 14:31. Caring for the poor does reflect God’s character and oppressing them is offensive to God. However, Christians disagree on how that principle is best worked out, with many Christians believing that raising the minimum wage will harm more than help the poor. Throughout history, conservative Christians have led the way in charitable giving and in caring for the poor at home and abroad. They do this through personal evangelism and service, and by giving through churches and other Christian organizations rather than through the government and using other people’s money.

I think that Proverbs 14:31 (and other passages like it) is fair game on the question of economical ethics. At the same time, I think this discussion needs to be nuanced. On the one hand, I do not think that it is right to say that someone who opposes raising the minimum wage is “oppressing” the poor. On the other hand, the consistent biblical ethic is for the godly to do whatever they can to show mercy, grace, favor and charity to the poor. So does Proverbs 14:31 point us in the direction of raising the minimum wage for workers? Yes. Does Proverbs 14:31 condemn any business that wants to keep the minimum wage the same? No. The current minimum wage is not tantamount to what the Bible calls “oppression” or “exploitation” of the poor, but neither is it what the Bible calls benevolence.

As an evangelical, I believe there are many political issues that ought to be Christian issues. Unfortunately, evangelicals often feel forced to choose between the “pro-life” (within the womb) issue that has become a hallmark of the Republican platform versus the “pro-life” (after birth) issues that have become the bread and butter of Democratic platforms… Rather than being “either/or” voters, we need to be “both/and” voters.

For the typical evangelical Christian who adopts a “pro-life” stance (and therefore tends to vote Republican), it seems uncomfortable to hear a Democratic candidate who does not identify himself as a heterosexual to call out evangelicals for not being concerned about the kind of social justice that Proverbs 14:31 advocates. My gut feeling is that many of us were taken off guard last night (as well as during the first debate last month), when Mayor Pete called out many evangelical Christians for being concerned about some issues that are Christian issues, but not other issues. Certainly, Mayor Pete is not the politician that most evangelicals feel comfortable with receiving a mild rebuke for hypocrisy. But whether or not the messenger is an ideal messenger, the message can still be true (consider David’s admission of this principle when he was taunted while fleeing Jerusalem).