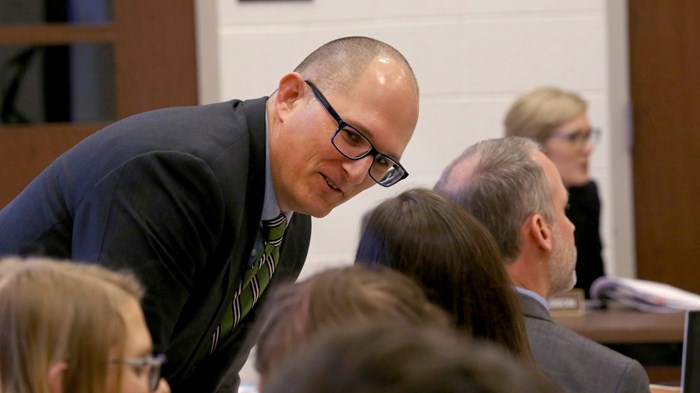 When Virginia public school teacher Peter Vlaming cited his Christian faith as the reason he declined to reference a transgender student with new pronouns, a school administrator replied that his “personal religious beliefs end at the school door,” according to a lawsuit filed last week.

Now a state court will decide whether that’s true as it adjudicates the dispute over Vlaming’s termination, and evangelical educators across the country—who face similar dilemmas in their own classrooms and hallways—will be watching for the outcome.

This case represents a growing legal clash between Christian teachers and policies around transgender students, who have recently fought for greater rights and recognition in schools. (Over the summer, a transgender teen in Vlaming’s home state won his case against a school bathroom policy that barred him from using restrooms that correspond with his new gender identity.)

“There was immense pressure to somehow go along [with school policy], but my conscience was clear,” he said in an email. “To just go along was to participate in something I knew was wrong. In moments like those you ask yourself, ‘Am I really going to live in accordance with what I know to be the truth?’ Not in my own strength. So, I asked God for the grace to carry whatever cross he gives me.”

Vlaming’s termination in December as a French teacher at West Point (Virginia) High School came after he agreed to call a transgender ninth-grader by a new male name but declined to use male pronouns to reference the student, according to the lawsuit filed September 30 in Virginia state court. Instead, he never used pronouns in the student’s presence—except for one accidental slip-up.

One of Vlaming’s classes divided into pairs for an activity using virtual reality goggles, the suit stated. When Vlaming saw the transgender student about to bump into a wall, he called out to the student’s partner, “Don’t let her hit the wall,” inadvertently using the student’s previous pronoun. After class he told Vlaming, “You may have your religion, but you need to respect who I am.”

The assistant principal at West Point said “his non-use of pronouns was not enough: that he should use male pronouns or his job could be at risk,” according to the suit, which claims the school violated the Virginia Constitution and state statutes in terminating Vlaming. The West Point School Board told the Washington Post it denies any wrongdoing and will “vigorously defend” itself against the lawsuit.

Illustrating the challenge around using transgender pronouns, West Point Principal Jonathan Hochman himself inadvertently used a female pronoun to reference the student as he testified at a December hearing before the school board. Hochman said he told Vlaming, “Refer to her by the male pronoun.”

Public school teachers across the nation may look to Vlaming’s case for legal precedent regarding transgender students, said David Schmus, executive director of the Christian Educators Association International (CEAI), an organization comprising 9,000 teachers in all 50 states.

“This is new territory. I’m not sure anyone knows which way this is going to go,” he said, adding a hope the case “will get a favorable hearing eventually … before the Supreme Court and will get all of our teachers some relief on this issue.”

In a survey of CEAI members this year, nearly a quarter of respondents said they have been asked to refer to a transgender student by a new name or new pronouns. Yet teachers “are a bit stuck” in deciding how to handle such cases, Schmus said, because “the courts have not given them relief of religious accommodations yet.”

A Barna Research survey found that a third of teens say they know someone who is transgender. Teens who are active in their Christian faith were less likely than Gen Z teens overall to say say it’s acceptable to be born one gender and to feel like another (54% compared to 69%).

At times, teachers’ attempts to grapple with gender-transitioning students have led to disciplinary action. A Florida math teacher faced reprimand in August for refusing to reference a student’s female pronouns after transition. In the same vein, a professor at Shawnee State University in Ohio sued after he was disciplined for declining, based on Christian convictions, to use a transgender student’s preferred pronouns, and an Indiana orchestra teacher filed suit after he lost his job for the same reason.

Mark Yarhouse, a Wheaton College psychologist who specializes in conflicts around gender identity and religious identity, called situations like Vlaming’s “a complicated topic,” noting, “The current cultural climate does not lend itself to resolutions that balance the beliefs and values of all parties.”

Like Schmus, he believes “different Christians in the teaching profession” may be “reaching different conclusions under similar circumstances.”

Among Christian public school teachers, Schmus said, there are at least two different approaches to referencing transgender students. Some teachers, like Vlaming, cannot “in good conscience” refer to a student with pronouns at odds with the student’s biological gender. Others comply with regulations about pronoun usage for the sake of the students, or to maintain their jobs.

Regardless of an individual teacher’s approach, “to watch a student struggle” with gender identity “is very, very heartbreaking, and our compassion certainly goes out to them.”

Yarhouse covered transgenderism and gender dysphoria for CT back in 2015, noting the particular controversy around whether and how to intervene when children act and identify according to the opposite sex. He concluded the piece by saying:

Certainly we can extend to a transgender person the grace and mercy we so readily count on in our own lives.

We can remind ourselves that the book of redemption in a person’s life has many chapters. You may be witness to an early chapter of this person’s life or a later chapter. But Christians believe that God holds that person and each and every chapter in his hands, until that person arrives at their true end—when gender and soul are made well in the presence of God.

CEAI encourages its members to build “positive relationships on campus,” Schmus said, because such relationships tend to curry “a degree of favor” that teachers can call upon “to work out an agreeable compromise with students, parents, and administrators” when gender transitions occur.

In Vlaming’s case, however, attempts at compromise were to no avail, he claims. “My treatment of a student with genuine respect—to which the rest of the class can attest—did not matter to the school board.”

He is asking the court to grant him more than $1 million for lost wages, “lost reputation,” and “emotional distress” among other alleged injustices.