Instagram posts spur backlash and lose her spot at an Answers in Genesis event.
Maria Baer|September 6, 2019 08:40 AM 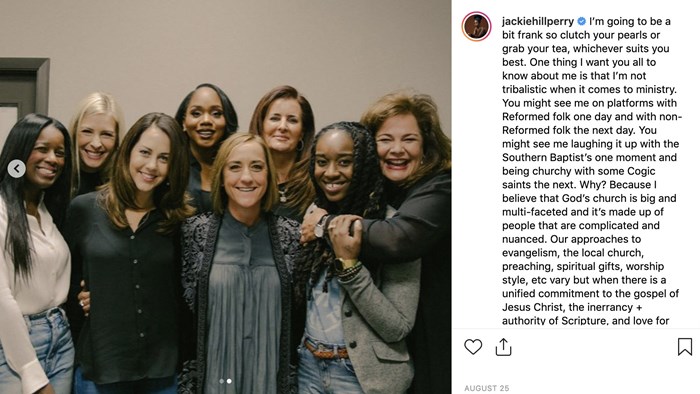 A year ago this week, Jackie Hill Perry released her first book, Gay Girl, Good God. In her writing and speaking, Perry has shared her insights on faith and her testimony as a former lesbian in evangelical spaces like The Gospel Coalition, Desiring God, and the Southern Baptist Ethics and Religious Liberty Commission—and faced some backlash.

But a different kind of controversy arose when she participated in a recent conference for Propel Women, a ministry founded by Christine Caine, alongside Pentecostal leaders including those from Bethel Music.

As a result, Perry has been forced to defend, explain, and clarify her position on working with those from other theological traditions, including some who ascribe to “false teachings.” Her affiliation with the women at the Propel event also lost her an upcoming speaking slot.

In late August, Perry was on the lineup for Propel’s Activate 2019 conference in Fort Lauderdale, Florida, alongside Caine, Lisa Harper, Sarah Jakes Roberts, and others, with musicians from Bethel Music leading worship. She posted a video to her Instagram stories with Jenn Johnson, co-founder of Bethel Music and worship pastor at Bethel Church in Redding, California.

Perry and Johnson were laughing, heads together, as Perry praised Johnson as a friend and a woman with “all the Holy Spirit.” That was enough for her to start hearing from followers.

As CT reported in a 2016 cover story, critics of Bethel often take issue with the church’s belief in the continued work of apostles and prophets—a tenet of the New Apostolic Reformation movement—as well as the claims of healings and other miracles.

Others on the lineup come out of the Word of Faith or prosperity gospel movement, which many Christians, including Perry herself, have decried as a harmful distortion of the gospel.

She responded to the whole thing on Instagram, sharing a picture of her posed with the whole Propel lineup:

You might see me on platforms with Reformed folk one day and non-Reformed folk the next day. You might see me laughing it up with the Southern Baptists one moment and being churchy with some Cogic (Church of God in Christ) saints the next. Why? Because I believe that God’s church is big and multi-faceted, and it’s made up of people that are complicated and nuanced.

These days, leaders are often measured not just by their own actions, but by the company they keep—which is becoming easier for followers to spot and scrutinize on social media.

Back in March, Francis Chan faced similar pushback after he was pictured with Benny Hinn and Todd White at a conference. He had to clarify that he doesn’t align with all fellow speakers at ministry events, but will take the opportunities to reach the crowds with a true, orthodox gospel.

Perry’s post referenced her similar position of finding herself alongside leaders she disagrees with and emphasized the importance of not being “tribalistic” in ministry:

Our approaches to evangelism, the local church, preaching, spiritual gifts, worship style, etc vary but when there is a unified commitment to the gospel of Jesus Christ, the inerrancy + authority of Scripture, and love for God and neighbor, the unity for which Christ prayed is made possible.

I don’t agree with everybody I do ministry with (including the folk people might call “theologically sound.” Some of them, being blindly complicit when it comes to white supremacy, who are faithfully inspired by the theological musings of slave masters but that’s a whole other conversation), but I love them still. And where I disagree, I’m open to discussion, and where I can learn, I have ears to hear. So yea, just in case you think I’m a part of “your tribe” just know that I’m not. I’m too free for that.”

Last week, Perry, who is listed among the headliners for Propel’s six-city conference tour, was removed from the lineup for an upcoming Answers in Genesis conference, a women’s event scheduled for March 2020, as a result of her recent “associations.”

“With sadness, we have disinvited Jackie Hill Perry from our Answers for Women Conference next year,” Mark Looy, the CCO of Answers in Genesis, confirmed in a statement to CT. “While she has a wonderful testimony and has appeared on conference platforms with many speakers we respect, Jackie’s associations with some groups that are not theologically sound have concerned us greatly, and it was those relationships that led us to make our decision. We wish her well in ministry.”

Perry also shared a longer response on Twitter, with multiple screenshots of an email she wrote to a detractor, to further clarify her position. She rebuked the prosperity gospel, calling the Word of Faith movement “foolish,” “a misrepresentation of the gospel of God,” and “unbiblical.”

That stance is in line with her position throughout her ministry career; Perry was featured last year in the documentary American Gospel: Christ Alone, which sought to expose the theological errors and ultimate worthlessness of prosperity gospel teaching.

Perry sees a difference between “false teachers,” those who willingly deceive others while living ungodly lives, and “false teaching,” which comes from a well-meaning but misinformed believer. She considers Bethel Church’s teachings to fall into the latter category.

She said, too, that she felt it was an important distinction that she wasn’t speaking at a Bethel conference but merely at a conference in which Bethel Music led worship.

Both the original post and her later clarifications sit atop what feels like a precipice in the church and the larger society. Amid calls for unity, bridge-building, and dialogue between people with disparate beliefs, there is a mounting pressure for leaders to be transparent about their own—to self-identify and make affiliations clear—even in short social media posts and soundbytes.

“It’s as if people are placed into categories and treated according to how they’ve been classified without any opportunity to actually be more than what they’ve been labeled,” Perry said in the email she shared.

Despite the backlash, other Christian leaders have come to Perry’s defense.

While critics may feel she drew a line in the sand, Perry seems to have moved past it. Her Instagram lately is filled with photos and videos from her Poets in Autumn tour, which made a stop in her hometown of St. Louis.

This week, she’s celebrating the one-year anniversary of her book while she prepares to release another—a Bible study for women on the New Testament book of Jude: a book known for, among other things, defending orthodoxy.