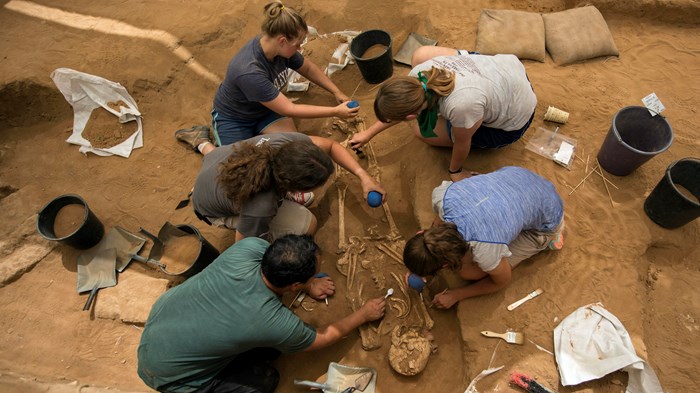 The nation’s leading evangelical archaeology program is closing, partly in response to COVID-19. Southwestern Baptist Theological Seminary (SWBTS) will shut down its archaeology program in May, terminating five professors and discontinuing its degree program, which currently has more than 25 graduate students.

The decision came as “part of campus-wide budgetary reductions necessitated by the financial challenges associated with COVID-19,” according to a statement SWBTS sent to Christianity Today.

The change is also part of an “institutional reset,” according to the statement. The former president of SWBTS, Paige Patterson, was forced out in 2018 after the board of trustees determined he had mishandled two cases of seminary students reporting they had been raped. The following year, the new president, Adam W. Greenway, said the seminary needed to “recalibrate” and return to its core commitments.

The archaeology program was not part of that vision. “We will no longer offer degrees in archaeology,” the SWBTS statement said, “because they are incongruent with our mission to maximize resources in the training of pastors and other ministers of the gospel for the churches of the Southern Baptist Convention.”

The Fort Worth, Texas, school is the third-largest Protestant seminary in the United States, measured by full-time enrollment. The Tandy Institute for Archaeolgy was started in 1983 with a $100,000 donation and a vision for training committed Christians who believed in the historical claims of the Bible to lead the field of biblical archaeology. The school launched a graduate program in 2007 and is currently the only evangelical institution offering a doctoral degree in archaeology.

The cost of an archaeology program is often quite prohibitive—even for well-funded institutions.

“Similar challenges face all Near Eastern Studies programs,” said Aaron Burke, professor of archaeology at the University of California Los Angeles. “In the absence of endowments to such programs, they are proving unviable owing to the size of faculty and resources required to support archaeological field programs and graduate study in related fields, such as Akkadian, Near Eastern History, Egyptology, etc.”

Back in 2013, Patterson said the program was expensive, but worth it because “the work of biblical archaeology across the years has provided significant evidence for the veracity of the Scripture.”

Steven Ortiz, the director of the Tandy Institute, declined to comment on the seminary’s decision and his termination. In a 2017 interview, however, he argued archaeology isn’t just important to academics, but to any Christian who wants to understand the Bible.

Douglas Clark, director of the Center for Near Eastern Archaeology at the Seventh-day Adventist La Sierra University, was saddened by the news of the closure. He called archaeology a critical discipline for informed biblical studies. “If exegesis begins with the questions, ‘What did these words mean to the people who first heard them?’” he said, “there is no better source for that information than archaeology.”

It is not clear what impact the closing will have on the publication of the findings from SWBTS’s recent excavations. In 2017, Ortiz and SWBTS faculty finished a 10-year dig at the biblical site of Gezer. The analysis of what they uncovered is still in process, and now in limbo without funding.

“An archaeological excavation is a long-term project,” said Tim Harrison, Chair of the Department of Near and Middle Eastern Civilizations at the University of Toronto. “You can’t just cut something like that.”

The end of SWBTS’s program will not be the only setback for biblical archaeology this year. Across Israel, excavation plans are being canceled or postponed in response to the spread of coronavirus.

Grand Rapids Theological Seminary announced a temporary halt to an excavation of Tel Dan, an ancient city on the northern border of Israel. Archaeologists have been digging in Tel Dan for most of the last 50 years, but will put the work on hold. “Due to the COVID-19 crisis, the 2020 excavation season has been canceled,” the seminary said in a statement. “We look forward to resuming excavations in 2021.”

Some archaeologists are still hoping to get a little excavation done this year. Scott Stripling, who is directing the excavation of Tel Shiloh for the Associates for Biblical Research, is putting off making any decision as long as he can.

“Right now, it is looking like we will have a postponed and shortened dig season—if at all,” he told CT. Tel Shiloh was the home of the Israelite tabernacle before the Ark of the Covenant was moved to Jerusalem and has been the site of one of the largest excavations in Israel in the last few years.

Others are waiting until after Passover to decide. Aren Maier of Bar Ilan University, who is directing the excavation of the Philistine city of Gath at Tel es Safi, said he doesn’t have to make a decision right now.

”I’m not very optimistic,” he wrote on his website. “From what I understand, there are very good chances that the official limitations on university and general public activities in Israel … will continue for many months more."

When archaeologists can’t work in the field, they turn to analysis, writing, and publishing. Archeology in Israel was previous curtailed in 1991, due to the Persian Gulf War, and in 2001, in response to the ongoing conflict between Israel and the Palestinians.