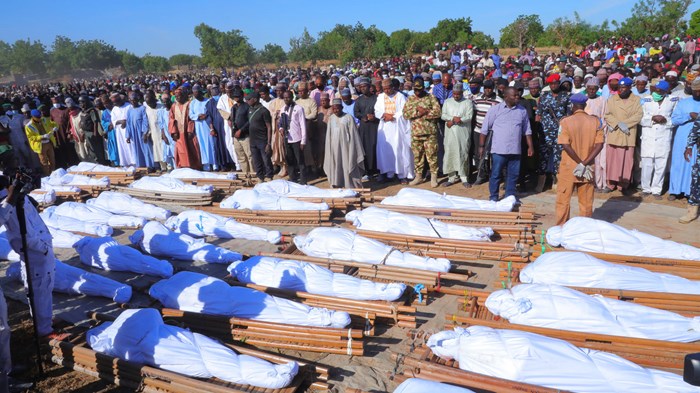 Only one country was added this year to the US government’s official list of the world’s worst persecutors of religion: Nigeria.

The West African nation – Africa’s most populous and divided roughly evenly between Christians and Muslims – has been plagued for years by rising sectarian tensions and the Islamist terror group Boko Haram, which most recently was blamed for a massacre of scores of farmers in Borno State.

Nigeria joins Burma, China, Eritrea, Iran, North Korea, Pakistan, Saudi Arabia, Tajikistan, and Turkmenistan on the US Department of State’s Countries of Particular Concern (CPC) list, which names and shames governments which have “engaged in or tolerated ‘systematic, ongoing, [and] egregious violations of religious freedom.’” Those nine nations were also on the 2018 and 2019 CPC lists.

“Today, the United States, a nation founded by those fleeing religious persecution … once again took action to defend those who simply want to exercise this essential freedom,” stated Secretary of State Mike Pompeo.

“… And yet our work is far from complete.”

Last year, Nigeria was added to the State Department’s Special Watch List (SWL), a secondary tier below the CPC list for governments that have “engaged in or tolerated ‘severe violations of religious freedom.’”

The 2020 watch list includes Comoros, Cuba, Nicaragua, and Russia, as it did in 2019. Cuba and Nicaragua were added to the list that year, while Russia was added in 2018.

The elevating of Nigeria to the highest level of concern was met with mixed reactions by the Christian Association of Nigeria (CAN).

“[We are] not happy that the US has placed Nigeria on a religious freedom blacķlist, because of the implications which include possible sanctions,” stated CAN president Samson Ayokunle.

“But at the same time, we are encouraged that the global world is aware of what is happening.”

Nigeria has religious freedom, CAN reminded, but it is denied in certain regional states—especially in the Muslim-majority north. Churches face discriminatory zoning procedures, and Christian professors are denied senior leadership positions, the group stated.

And while Muslims denounce terrorism by Boko Haram and its breakway faction, Islamic State West Africa Province (ISWAP), such violence is done in the name of Allah, stated CAN. Fulani herdsmen, meanwhile, kill in predominantly Christian farming communities.

“Pastors and their families are under attack,” stated Ayokunle. “Churches are being burnt and destroyed. They are taking over our farms and communities.”

Agreeing that religious freedom is enshrined in Nigeria’s constitution, he called on the government to show—rather than say—that it is “real.”

As did Sunday Agang, president/provost of ECWA Seminary in Jos.

“A lack of religious freedom anywhere in the world is an outright denial of our God-given human freedom,” he said. “The administration of [President] Muhammadu Buhari needs to be confronted with the truth—Nigeria lacks religious freedom!”

“Our political leaders have allowed religious bigots, fanatics, and extremists to terrorize fellow citizens,” said the Kaduna state chairman of the Christian Association of Nigeria (CAN).

“No responsible government permits certain citizens to be treated badly, because of their faith.”

The problem is not just for Christians, he said. Shiite Muslims are persecuted also. Meanwhile, banditry and kidnapping affects everyone, though the severity of treatment often depends on one’s faith.

“No more lip service from the government,” said Hayab. “All forms of religious persecution must stop.”

The Nigerian government rejected the designation as a case of “honest disagreement.”

But religious freedom advocates had similar reactions to Nigerian Christians.

“I am sad it came to this but it’s time for Nigeria to change its behavior; it must protect its citizens,” tweeted Johnnie Moore, a member of the US Commission on International Religious Freedom (USCIRF) who visited Nigeria last year and wrote a book on his findings. “Nigeria now has the unfortunate distinction of being the first democracy ever added to the … infamous list of the worst religious freedom violators in the world.”

USCIRF has advised the State Department to add Nigeria to the CPC list since 2009.

“We especially welcome the increased level of accountability that will result,” Trent Martin, a Wilberforce21 fellow, told CT.

“Throughout the country, the people of Nigeria face a rising tide of violence that has left places of worship burned to the ground, families torn apart, and girls still held captive by terrorists,” he said. “We will continue to speak up for these people and encourage the American government to use this designation as a means to advocate for needed action in Nigeria.”

Sudan and Uzbekistan have been removed from its Special Watch List “based on significant, concrete progress undertaken by their respective governments over the past year,” stated Pompeo. “Their courageous reforms of their laws and practices stand as models for other nations to follow.”

One Sudanese evangelical leader was “grateful.”

“It is true there have been slight steps taken to reform the law,” said Aida Weran, academic officer of Nile Theological College, in Khartoum. “But it has led to positive developments in religious freedom.”

Both Sudan and Uzbekistan had been listed as CPCs as recently as 2019 and 2018, respectively. USCIRF recommended earlier this year that both nations remain on the watch list; however, vice chair Tony Perkins stated today that its commissioners find it “undeniable the historic progress that has been made in these two countries” and “hope that their progress encourages positive change in other places.” [CT has reported on the religious freedom progress in both Sudan and Uzbekistan.]

“Both countries have undertaken real reforms that have improved the situation on the ground for religious minorities, as well as the country as a whole,” said Thames, currently a senior fellow with the Institute for Global Engagement which has long focused on Uzbekistan. “In both, we have seen oppressive laws and policies changed, and people freed from prison. Churches are freer to meet than at any time in recent memory.”

21Wilberforce also praised the removals. "Years of courageous leadership in those countries coupled with international engagement with civil society, religious freedom roundtables, and other governments has fueled promising progress for religious freedom in both nations,” said Martin.

However, Thames also criticized the lack of one addition: India.

“The State Department’s failure to add India to the Special Watch List was disappointing and a glaring omission,” he said. “The trend lines continue to point downward, with anti-conversion laws and attacks on churches of growing concern to India’s large Christian community.

“Other minorities are targeted, as government policies could force millions of Indian Muslims into statelessness, Muslims are lynched for selling beef, and India’s largest state Uttar Pradesh recently established criminal penalties for interfaith marriages,” said Thames. “If the United States had added India to the watch list, it could have encouraged a much-needed course correction back towards India’s founding ideals of tolerance and minority rights.”

USCIRF recommended in its 2020 report that India be added to the higher CPC list, along with Russia, Syria, and Vietnam.

Two groups, “al-Qa’ida in the Arabian Peninsula and ISIS-Khorasan,” were removed from the EPC list “due to the total loss of territory formerly controlled by these terrorist organizations,” stated Pompeo.

“While these two groups no longer meet the statutory criteria for designation, we will not rest until we have fully eliminated the threat of religious freedom abuses by any violent extremist and terrorist groups,” he stated.

The State Department is required to produce the CPC list every year by the International Religious Freedom Act, which was passed in 1998 and strengthened in 2016.

In the most recent attack to make international headlines, suspected members of Boko Haram killed scores of rice farmers and fishermen last month as they were harvesting crops in Nigeria’s northern state of Borno, officials said. The UN humanitarian coordinator in Nigeria, Edward Kallon, later stated that 110 people had died, according to multiple media outlets.

The November 28 attack in a rice field in Garin Kwashebe came on the same day that residents were casting votes for the first time in 13 years to elect local councils, although many didn’t go to cast their ballots.

The farmers were reportedly rounded up and summarily killed by armed insurgents in retaliation for refusing to pay extortion to one militant.

Malam Zabarmari, a leader of a rice farmers association in Borno state, confirmed the massacre to The Associated Press, saying at least 40 people were killed.

Prior to the US CPC designation, President Buhari was summoned to appear before a joint session of Nigeria’s National Assembly to give account of the security situation.

The Nigerian Senate, for the third time, called for top military officials to be replaced.

CAN stated that 95 percent of security chiefs are Muslim.

“We have cried in vain to the president to correct the lopsided appointments,” Ayokunle stated. “The country belongs to every citizen irrespective of their religious affiliation, but the government is not interested.”

“I condemn the killing of our hardworking farmers by terrorists in Borno State. The entire country is hurt by these senseless killings. My thoughts are with their families in this time of grief,” he said.

Buhari said the government had given the armed forces everything needed “to take all necessary steps to protect the country’s population and its territory.”

A member of the House of Representatives, Ahmed Satomi, who represents the Jere Federal constituency of Borno, said at least 44 burials were taking place Sunday.

So while the Christian leadership of Nigeria fears the impact of the CPC designation by the United States, the job of securing religious freedom may be too big for Buhari alone.

“CAN has been consistently calling on the government to fix the security challenges before too late,” Ayokunle stated. “We call on the international community to help our government to wipe out these terrorists.”

Additional reporting by Haruna Umar and Bashir Adigun of The Associated Press in Nigeria.

US Adds Nigeria to Top of Religious Persecution ...