Lead plaintiff wins permission to stay while others could be redetained as soon as next month.
Griffin Paul Jackson|January 16, 2020 08:00 AM 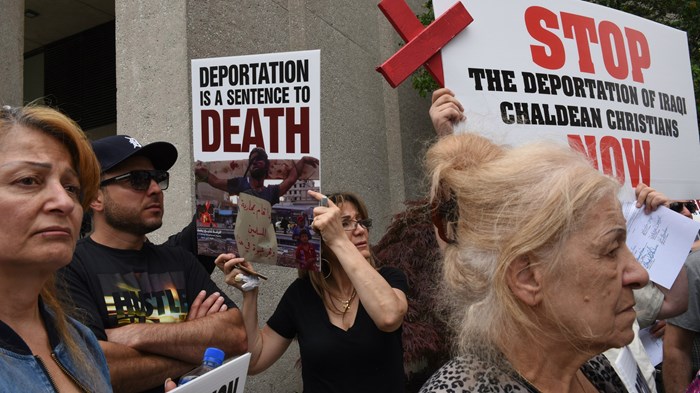 Image: Tanya Moutzalias / The Flint Journal-MLive.com via AP)
Hundreds of Chaldeans rally against the ICE raids in 2017.

The Iraqi Christian at the center of a class-action suit challenging the detention of fellow Iraqi nationals in the Detroit area was granted a major victory in court Tuesday and will be allowed to stay in the US and become a citizen.

The decision in favor of Sam Hamama comes days after a legal setback for hundreds of others who had been detained by US Immigration and Customs Enforcement (ICE) and released more than a year ago so they could litigate their individual cases.

Last Friday, the Sixth Circuit Court of Appeals rejected the classwide decision freeing the Iraqis from detention, potentially leading to redetainment and a renewed threat of deportation.

“The whole point of the federal litigation was to give people time to fight their individual immigration cases,” Margo Schlanger, one of the lead counsels in thecase, told CT. “Hundreds of people assisted by the class action have done that, and, while some have lost, lots of them have won. For many others, the individual immigration cases are still pending. So Sam’s victory is one of many, we’re happy to say.”

In 2017, more than 1,400 Iraqis living in the United States, most of whom had either overstayed visas or have criminal convictions, were living under “final removal orders” that made them targets for deportation. Hundreds of these Iraqi nationals were rounded up in ICE raids and held in detention facilities meant to house them until they could be deported.

The move was part of a policy shift spurred by the Trump administration’s travel ban, as Iraq agreed to begin accepting deportees in exchange for being removed from the list of banned countries.

But the process faced a major obstacle. America has committed itself to not repatriate anyone into circumstances of likely persecution or torture. Supporters of the detained Iraqis have argued Iraq presents just such dangerous circumstances.

Due to violence and the ongoing persecution of Christians in Iraq (more than 300 of the detained Iraqis are Chaldean Christians), the prospect of deportations was met with enormous pushback. The dilemma—detaining deportees for a country too dangerous to accept them—meant the Iraqis were held in prolonged detention, with no end in sight.

By the end of 2018, as part of the flagship Iraqi deportation case Hamama v. Adducci, district court judge Mark Goldsmith ruled that “the Federal Government cannot indefinitely detain foreign nationals while it seeks to repatriate them, when there is no significant likelihood of repatriation in the reasonably foreseeable future.”

As a result, most of the Iraqis represented in the Hamama case were released and reunited with their families, some of them having spent nearly a year and a half behind bars.

On Friday, the Court of Appeals claimed, “The district court had no jurisdiction to do what it did.”

The release ruling was overturned in a 2–1 decision citing detentions statutes. “Those are the statutes covered by the jurisdictional bar, and the [district] court’s injunction prevented those statutes from operating, whether with respect to mandatory or permissive detentions,” stated the Court of Appeals’ opinion. “What was true the first time around remains true today.”

While the opinion doesn’t make a decision on deportations—that depends on individual immigration cases and the Iraqi government—it does put Iraqis at risk of additional detentions. The ruling could be implemented as soon as February 24.

“We strongly disagree with the court of appeals decision,” said American Civil Liberties Union (ACLU) senior staff attorney Miriam Aukerman. “It was not a mistake that your family was together this past year, and we will do everything in our power to make sure that your family isn’t torn apart all over again in 2020.”

Lawyers representing the Iraqi nationals have a variety of options for responding to the decision, including a rehearing, and individual immigraiton cases continue to move ahead.

These cases are bearing fruit. Hamama, an Iraqi who came to America as a refugee in 1974, recently won his hard-fought victory when he was granted permission to stay in the United States permanently and become an American citizen.

Along with some other at-risk Iraqi nationals, Hamama was eligible for 212(c) relief, available to lawful permanent residents who pleaded guilty to a crime before April 1, 1997.

“In addition to receiving a pardon, qualifying for 212(c), having an array of resources and a strong legal team behind him, it still took Mr. Hamama years to breathe a sigh of relief,” Nathan Kalasho, an advocate who heads a Detroit school focused on Iraqi Christians, told CT. “That is how broken our system is.”

“Many tears were shed in immigration court today in Detroit, but this time they were tears of joy!” stated Mike Steinberg, University of Michigan law professor and former legal director of the ACLU of Michigan.

Aukerman told CT that Hamama’s case provides two chief lessons: the importance of due process, and the problem of indefinite and “incredibly long” periods immigration detainees are held waiting for their cases to be heard.

“You cannot just lock people up and throw away the key. You cannot have prolonged detention divorced from reason,” said Aukerman. “That idea is just anathema to our sense of human decency.”

Even as the potential for new ICE raids looms, some of the Chaldeans are making progress in their cases. But for many aren’t scheduled to appear in court until 2021 or even 2022, and they may be deported before their court dates.

“Everyone at risk of deportation has an individual case, so there are different ways to seek relief, but many have exhausted their options,” said Kalasho.

Several detained Iraqis have already been deported. The most controversial case is that of Jimmy Aldaoud who, at 41, knew no Arabic and had never lived in Iraq (he was born to Iraqi parents in a refugee camp in Greece) but was deported to Baghdad last summer. After two months, he was found dead, allegedly because he could not find access to insulin for his diabetes.

“There’s a lot of anxiety,” said Martin Manna, president of the Chaldean Community Foundation, according to the Los Angeles Times. “Jimmy was sacrificed because of US immigration policy, and that needs to change.”

The new Court of Appeals ruling has ratcheted up that anxiety again.

“Just earlier today I received a call from a panicked sister of a detainee who told me she is ready to give up,” said Kalasho.

The situation is exacerbated by the current tensions in Iraq, now ranked No. 15 on the 2020 World Watch List. After Iranian military leader Qassem Soleimani was killed in Iraq on January 3 at the order of President Trump, shockwaves of violence and anti-American sentiment have rippled.

“Mass demonstrations against corruption and heightened US-Iran aggression has placed Iraq in another untenable situation,” said Kalasho. “Protestors have been met with violence from militia groups, including kidnappings, rapes, and murders. Just last week, two prominent journalists were killed. Even the Baghdad Airport, which would be receiving deportees, has been the target of attacks from multiple sides.”

On the same day as the Court of Appeals decision, the US government issued a call for all Americans to leave Iraq.