Some Chaldean detainees lost their chance to fight to stay. But it’s still unclear if their home country will let them back.
Bekah McNeel|April 4, 2019 09:05 AM 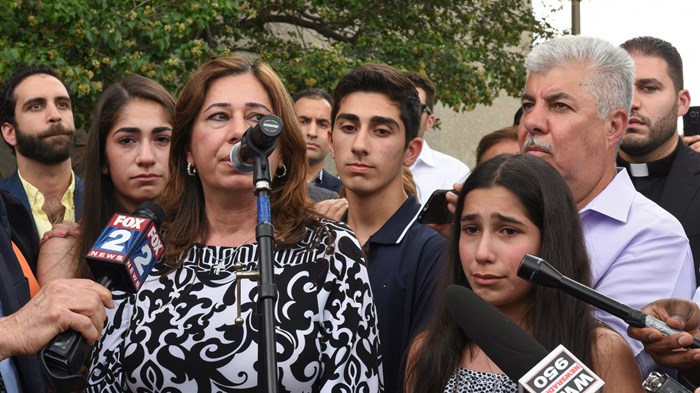 Image: Tanya Moutzalias / MLive Detroit via AP
Nahrain Hamama’s husband, who came to the US as a child refugee from Iraq in 1974, was detained in the 2017 raids and became the lead plaintiff in an ACLU class-action lawsuit seeking to halt deportations of Iraqi nationals.

Hundreds of Iraqi Christians detained in immigration raids are once again at risk of deportation after losing their chance to keep fighting their cases in court.

On Tuesday, the Sixth Circuit Court of Appeals closed the book on Hamama v. Adducci, a class-action lawsuit filed in June 2017 by the American Civil Liberties Union (ACLU) on behalf of 1,400 Iraqi natives, including more than 100 Detroit-area Chaldean Christians, who were detained by US Immigration and Customs Enforcement and told they would be repatriated to their home country.

After the raids two years ago, a district judge granted an injunction to protect the detainees, many of whom have lived in the US for decades, and let them present their cases in court. Last December, a Sixth Circuit panel overturned the protections, and this week the full court declined to hear further arguments, allowing the government to resume deportations as soon as next week, Michigan Radio reported.

The ACLU argued that sending the Christians back would put them in danger of torture or death. The historic Chaldean Catholic Church had been the largest Christian group in Iraq, which now ranks No. 7 on Open Doors’s list of countries most dangerous for Christians.

Iraqis’ claims of imminent danger have for decades persuaded the US and Iraqi government to allow them to stay in the US, despite lapses in immigration documents and even felony convictions. (After paying their debt to society, most convicted felons from Iraq have lived under what are known as final orders of removal, meaning that if they leave the US, they are not permitted to re-enter. Many of those swept up in the 2017 and 2018 raids had final orders of removal from crimes committed in the 1980s and ’90s.)

Metro Detroit—home to one of the largest Iraqi diasporas in America, along with Chicago and San Diego—also contains the largest Chaldean population outside of Iraq, with estimates between 120,000 and 150,000. Half of the 200 detentions have been from the Detroit area.

Judge Mark Goldsmith ruled last November that the detainees could not be held indefinitely while the government waited for permission to deport them. Those who had been held longer than six months were released on bond and allowed to file for hearings before an immigration court.

But the Sixth Circuit’s ruling also overturned this provision, giving just seven more days to file for immigration hearings. Most have done so, ACLU attorneys told the Detroit News, but the smaller number that remain in detention or have not filed for hearings face deportation as early as April 9.

Whether Iraq will accept deportees is still up for question. The country previously refused to do so, but cut a deal agreeing to repatriate its citizens in exchange for being removed from the list of banned countries under President Trump’s second “travel ban” executive order. However, the details of the agreement remain unclear, and court documents show that the US government had to cancel at least one Iraq-bound flight for deportees because of the Iraqi government’s refusal to accommodate them.

Further complicating any repatriation efforts, many of the 1,400 Iraqis in the 2017 roundup have been in the US for decades, some since early childhood. The Iraqi government could face difficulty determining where they should be sent. Some speak only English.

Chaldeans have immigrated to the US steadily since the late 19th century, lured in greater numbers by economic opportunity as the automobile industry grew. The Chaldean American Chamber of Commerce characterizes the appeal of Detroit this way on its website:

Chaldeans began immigrating to the Metropolitan Detroit area in the 1920s in search of better economic, religious and political freedom and opportunities. While some were lured by Henry Ford’s famous $5-a-day working wage, in true Chaldean fashion entrepreneurial endeavors quickly took hold—particularly mom and pop food markets. Today, nearly two-thirds of Chaldean households own one business and 39% own two or more.

The diaspora community grew after Christians fled in 1963 when the Ba’ath Party (and quickly thereafter Saddam Hussein) took power, and again during the Iraq War. Immigrants are quickly assimilated into the Chaldean community, its leaders say, in large part due to the strong network of churches and Chaldean owned-businesses in the area.