How a familiar Old Testament benediction became a viral hit during the pandemic.
Megan Fowler|July 29, 2020 10:20 AM
españolPortuguêsIndonesian 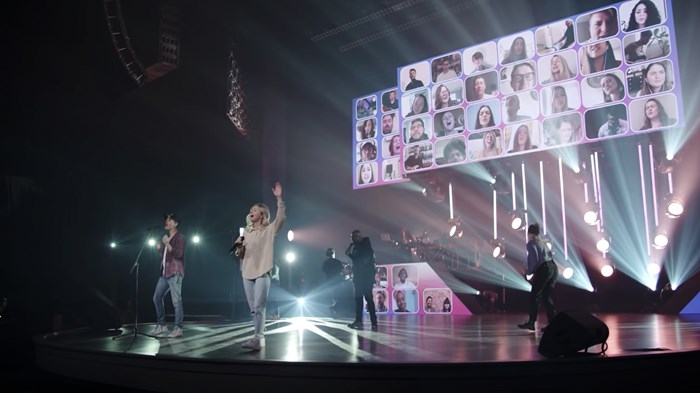 [Read in Indonesian, in addition to Spanish and Portuguese]

Just a couple of weeks before the coronavirus pandemic shut down the US, Kari Jobe held a songwriting session with her husband, Cody Carnes, and Elevation Worship’s Steven Furtick and Chris Brown. Together, they set to music one of the Bible’s best-known benedictions, Numbers 6:24–26:

When they introduced “The Blessing” at an Elevation Church campus near Charlotte, North Carolina, on March 1, Jobe told worshipers that the lyrics represent “the heart of the Father over us as his kids” and invited them to receive the song as “a blessing over you and your family and your children.”

They had no idea how many Christians would want to hear and sing out those words as the pandemic spread in the months to come. In just five months, “The Blessing” has become a chart-topping hit and viral sensation covered by more than 100 virtual choirs around the globe.

“Because this song is based on Scripture, the message is timeless, and we wanted to release it as quick as we could knowing the effect it could have on people ’s hearts and spirits immediately, as it did ours,” Jobe told The Christian Beat. “God knew it would be something we could hold onto during a season of our lives that ’s full of uncertainties and unknowns.”

The 12-minute video of the live performance at Elevation premiered on March 6 and has over 21 million views. One of those early viewers was Alan Hannah, assistant lead pastor at Allegheny Center Alliance Church in Pittsburgh, who helped organize the first virtual choir to cover the song.

Inspired in part by the Nashville studio singers whose cellphone recordings of “It is Well With My Soul,” garnered 1.3 million views on YouTube, Hannah and fellow Pittsburgh pastor Jason Howard of Amplify Church contacted local worship leaders to participate by recording themselves singing “The Blessing.”

Nearly 30 churches contributed to the final version, which was released on Easter Sunday. The idea was to “come together as a church and sing this song over our city as a blessing in a time of uncertainty and fear,” Hannah said.

Their compilation launched a global trend. Within 24 hours of its premiere, “The Pittsburgh Blessing” caught the attention of Tim and Rachel Hughes, lead pastors at Gas Street Church in Birmingham, England.

The Hugheses reached out to the churches and ministries in their networks to assemble a virtual choir that would represent the United Kingdom. The UK Blessing premiered on May 3. “It’s been a beautiful thing seeing it come together,” Tim Hughes told Premier Christianity.

Over 100 virtual choirs have since created versions of the song, declaring God’s blessings over cities, countries, and whole continents.

The project has given churches the chance to unite behind a common message. In Australia, “this is the first time this has happened,” the organizers of the choir wrote. Three hundred churches participated in the video, which featured images of the Australian landscape and wildlife, volunteers packing meals, dancers, and First Nations people.

In New York City, the virtual choir video acknowledged the city’s role as the epicenter of COVID-19 deaths and also the late-spring protests over racial inequities and violence. The video included drone footage of New York City landmarks juxtaposed with images of field hospitals, doctors, and protesters.

“NYC Blessing” included 125 singers from 100 churches singing in eight languages, including some of the largest churches in the city, like the Christian Cultural Center and Redeemer Presbyterian.

The video’s organizer, Bonny Andrews, founder of the ministry Transform Cities, came to the New York City from India less than a year ago. Before the lockdown, he used to pray for the city every day on his ferry ride. He sees the project as an act of love for the city, in the spirit of Jeremiah 29:7, a song of lament and hope.

The goal of “NYC Blessing,” Andrews said, is to inspire cities around the globe to sing blessings over their communities using songs that are unique to their cultures. “We want to fill the Internet with song, because a song can go where a sermon cannot,” he said.

Accompanying the words of “The Blessing” have been acts of blessing for communities in need. The churches involved in “NYC Blessing” have served meals to community members and secured masks and personal protective equipment for frontline health care workers.

The 65 churches represented in “The UK Blessing”—ranging from Catholic and Orthodox to Assemblies of God and Church of England congregations—have served 400,000 hot meals since the beginning of the COVID-19 lockdown.

Irish churches took the idea and crafted a virtual choir with the inflection of the Emerald Isle. Over 300 churches from every county provided footage of members singing “Be Thou My Vision.”

“We wanted to honour that inspiration, whilst at the same time, honouring the unique history and culture of our island. So we chose a song that would resonate across the island, with every denomination and cultural grouping, one that could be used as a platform to sing a Blessing over our land, all our key-workers, and those they are caring for,” organizers wrote in the YouTube description.

Worship songs are typically a slow burn, taking months to transition from popularity on Christian radio to being incorporated on church set lists. But “The Blessing,” now No. 2 on Christian Copyright Licensing International’s most popular songs list, jumped to the top thanks to the viral YouTube covers. (CT also covered the global appeal of the No. 1 song on the list, “Way Maker.”)

“The Blessing” was able to spread quickly in so many languages in part because the words are relatively simple and easy to learn or translate. It repeats the passage from Numbers 6 as its only verse with a chorus of amens and three bridges at the end.

Since the initial video of “The Blessing” premiered in March, Bible Gateway has seen growing interest in Numbers 6:24–26. Engagement in the passage and related searches for “blessing” are up 73 percent worldwide over last year.

“I have cried so many times as I’ve watched different people all over the world declaring the blessing over their families, their churches and their nations," Jobe said. “That brings so much peace, especially in a season of disappointment, uncertainty and fear like we have all been waking through this year.”

Back in May, Elevation Worship acknowledged the global appeal of “The Blessing” by performing the song with a live global choir.

Editor’s note: You can now read or share this article in Indonesian, Portuguese, and Spanish as 1 of 150+ CT Global translations.

You can also now follow CT on WhatsApp and Telegram.

[ This article is also available in español,  Português, and Indonesian. ]