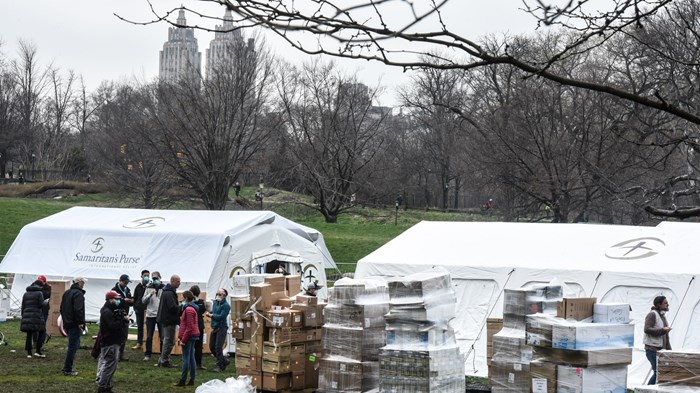 A series of white tents went up in New York’s Central Park this weekend as workers assembled a 68-bed emergency field hospital for people infected with the coronavirus.

The field hospital, which is expected to open today, will allow Mount Sinai Hospital on 98th Street and Fifth Avenue—just across the street from the park—additional surge capacity as New York City grapples with an overstretched hospital system.

Samaritan’s Purse also set up a field hospital in Cremona, Italy, in the hard-hit Lombardy region, where it has treated more than 100 people.

New York’s death toll from the coronavirus surpassed 965 on Monday—the most of any state. It had nearly 60,000 confirmed cases of COVID-19.

Samaritan’s Purse will staff the New York City hospital with 72 disaster response specialists from around the country, working as contractors for the organization. They include doctors, nurses, paramedics, lab technicians, and pharmacists, as well as a technical support crew.

“It’s not only that New York is overwhelmed and has a lack of patient beds,” said Kaitlyn Lahm, a spokesperson for Samaritan’s Purse, the evangelical humanitarian aid organization led by Franklin Graham. “It’s that staff are overworked. We will be fully self-sustained at the emergency field hospital.”

The field hospital will have up to 10 intensive care unit beds with ventilators.

Several trucks left the organization’s North Wilkesboro, North Carolina, warehouse Saturday morning and arrived in New York City that night. By Sunday, it had recruited dozens of New York City church volunteers to help set up the hospital. They worked throughout the day to unpack crates, drive stakes into the ground, and lay down plastic flooring.

The makeshift hospital will have electricity, heating, water, and a fully staffed pharmacy and lab.

Cory Maxwell-Coghlan said he got a text asking if he’d be willing to volunteer Sunday morning. The 38-year-old director of the Faith and Work Center at Redeemer Church in New York City was among about 40 local volunteers who helped the North Carolina team.

“I’m not a medical professional, so I can’t do much,” said Maxwell-Coghlan. “But it felt really good to contribute in some way—to be useful.”

He said several New Yorkers stopped by as the teams were assembling the hospital and snapped photos.

“It’s not something you would expect in a fairly affluent neighborhood of New York City on the Upper East Side,” he said. “These hospitals are usually deployed to developing countries. It felt eerie to do that.”

Lahm said Samaritan’s Purse is now in the process of acquiring materials for a third field hospital.