With Conferences Canceled, UMC Split and SBC Votes Wait for Next Year

Besides budget approvals, most denominational business can be rescheduled.
Megan Fowler and Kate Shellnutt|March 30, 2020 08:00 AM 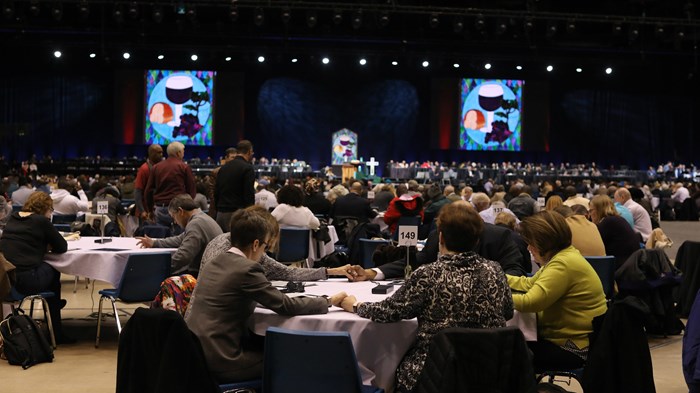 Major conferences held by the two largest Protestant denominations in the country have joined the long list of events canceled by coronavirus.

Last week, the Southern Baptist Convention (SBC) called off its annual meeting scheduled for June 9-10, its first cancellation since World War II 75 years ago. The week before, the United Methodist Church (UMC) announced it would have to push back its quadrennial General Conference another year after its venue, the Minnesota Convention Center, canceled events through mid-May.

While members understand the circumstances, the decisions still come as hard news. Besides the denomination-wide fellowship and morale-building that happens at these gatherings, they are the vehicle for important decision-making affecting churches and ministries.

Leaders from both denominations say the delay puts some business on hold—but in most cases, the votes can wait. That includes the long-anticipated decision over how the UMC could split over irreconcilable differences on LGBT issues.

Postponing the UMC conference to 2021 gives leaders more time to deliberate their disunion. In January a group of traditional and progressive denominational leaders agreed on the “Protocol of Reconciliation & Grace Through Separation,” which proposed allowing conservative congregations to break away and form a new body. Rather than voting on the protocol in May, delegates will hold off until the 2021 General Conference.

Many UMC churches had already begun to discuss whether to stay or go—with exiting churches keeping their buildings and taking $25 million to form the new denomination under the proposed protocol—but it’s unlikely any could afford to jump the gun and leave before the rescheduled vote takes place.

“I am confident that there are congregations that are frustrated, disappointed, and even angry at the delay,” said Keith Boyette, president of the Wesleyan Covenant Association (WCA) and one of the leaders who helped develop the protocol. “There is not a vehicle for them to depart the denomination in the absence of the protocol that’s not very costly.”

Even if churches stay put for the time being, some worry individual members may not.

“The primary concern I have is that there are a lot of people who are going to say, ‘I’m not willing to wait any longer,’” Jay Brim, a lay delegate from Texas, told UM News.

Mark Tooley, president of the Institute for Religion and Democracy, said postponing the vote on the protocol gives churches more time to discuss and plan for the future.

The general conference was also the chance for United Methodists to elect new members of its Judicial Council and approve the budget for the next four years.

While the election is delayed, the budgets needed to be approved so ministries could continue operating into 2021. On Friday, the General Council on Finance and Administration extended the same apportionment calculations approved by the 2016 General Conference for another year, with some concern that ministries would need even more funding under the demand of the COVID-19 pandemic.

In the case of the SBC, the work around its highest-profile issue in recent years—combatting abuse—goes on regardless of whether the whole convention assembles or not. Churches and state conventions will continue to train through its Caring Well curricula, and the credentials committee will keep evaluating reports of churches that disregard denominational standards on sex abuse, race, or theological issues.

After the committee gathered in February, just one church was removed from fellowship for a blatant violation: employing a known sex offender whose victims were pre-teen girls. It’s possible that at the June annual meeting, where motions can be made from messengers on the floor, someone could have challenged the efficacy of the committee, which only evaluates claims submitted to it and “has no investigative authority or power.”

Though mishandling sexual abuse has already been grounds for dismissal from the denomination because it violates the Baptist Faith and Message, the SBC will have to wait for the second of two consecutive votes to confirm a constitutional change to call it out explicitly.

The Executive Committee, which is tasked with deciding on convention business in between annual meetings, will have the option to vote to approve the annual budget at its next meeting, currently scheduled for September.

And while convention-wide voting cannot take place anywhere outside the in-person annual meeting, some other elements of the 2020 gathering may be shared in different formats. The annual reports given by missional entity heads and seminary presidents will be compiled into a digital PDF to be shared in June, for example, and some related gatherings will take place over livestream instead.

But right now, most Southern Baptists are more worried about the state of their churches and communities under the coronavirus outbreak than anything that would have happened in a convention center in June.

“The work continues,” said Amy Whitfield, associate vice president for convention communications. “They have everything they need to do their jobs, and they are already on it,” with state conventions, local churches, and denomination-wide entities rallying resources and aid.

SBC President J. D. Greear, whose would have ended at this year’s meeting but will extend until 2021, urged churches to consider using the funds designated for sending pastors to the Annual Meeting to instead alleviate some of the financial strain for others, like helping a bi-vocational pastor or church planter make payroll.

The Presbyterian Church in America (PCA) is still waiting see the intensity and duration of the COVID-19 pandemic before making a decision on its general assembly, scheduled for June 16-19 in Birmingham.

The International Church of the Foursquare Gospel (ICFG) canceled its Global Summit and Foursquare Connection 2020, scheduled for the end of May in Denver.

The Anglican Communion has postponed until next year its decennial Lambeth Conference to be held in Canterbury, England. The conference brings together bishops from around the world.

With Conferences Canceled, UMC Split and SBC Votes Wait for Next Year