Southern Baptists Disfellowship Church Over Abuse for the First Time

Southern Baptists Disfellowship Church Over Abuse for the First Time 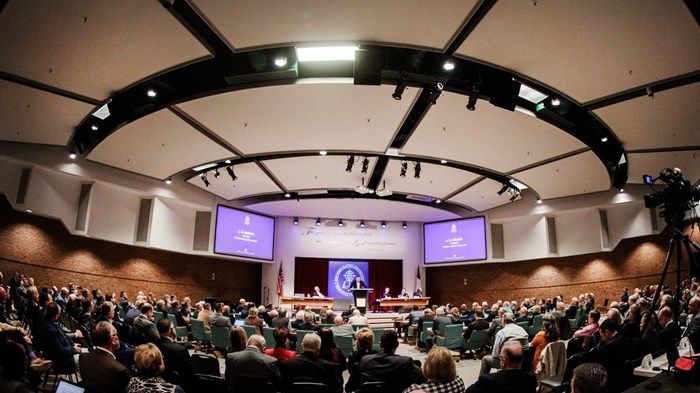 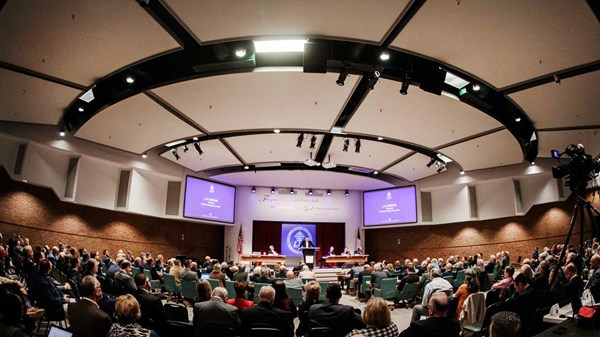 Southern Baptists Disfellowship Church Over Abuse for the ...

The Southern Baptist Convention (SBC) has disfellowshipped a west Texas congregation that knowingly employs a registered sex offender as pastor, the first church to lose its ties with the denomination amid a heightened push to combat sexual abuse.

The decision came Tuesday, during a meeting of the SBC Executive Committee at its headquarters in Nashville. Based on a recommendation from the convention’s repurposed credentials committee, the Executive Committee acted unanimously to declare that Ranchland Heights Baptist Church in Midland, Texas, should “no longer be considered in friendly cooperation with the Convention.” Practically, that means it will no longer be eligible to send messengers to the SBC annual meeting.

Previously, churches had only been disfellowshipped from the SBC over LGBT-related issues and racism, though a Houston church voluntarily withdrew from the convention last year after the Houston Chronicle reported its pastor pleaded guilty to sexually assaulting a teen girl more than two decades ago.

Ranchland Heights pastor Phillip Rutledge was convicted of sexually assaulting two preteen girls in 2003. A deacon at the church told the local CBS affiliate in 2016 that “the vast majority” of members knew about Rutledge’s child sex offender status. The deacon added that the church ensures children “are never by themselves” with the pastor. Ranchland Heights’ Facebook page, which was removed following the decision, had listed its motto as “the church of second chances.”

Though the church may appeal the Executive Committee’s decision to the full SBC, credentials committee chairman Stacy Bramlett said they do not anticipate an appeal. Ranchland Heights did not respond yesterday to a call for comment.

During the February 17-18 meeting, unity was a recurring theme but disagreements over an alleged liberal drift in the nation’s largest Protestant denomination surfaced repeatedly, as the Executive Committee questioned the lineup of the SBC Pastors’ Conference and authorized a task force to study “concerns” related to the SBC’s Ethics & Religious Liberty Commission (ERLC).

The Executive Committee also recommended that SBC messengers in June give the second of two required approvals to amend the SBC constitution to state explicitly that mishandling sexual abuse is grounds for a church to be disfellowshipped. (The convention already has the power to disfellowship a church for any reason.) The credentials committee will continue to meet regularly and consider reports submitted through an online portal of churches alleged to have departed from Southern Baptist doctrine or practice.

The committee did not discuss the volume of reports they have received through the portal or the names of churches whose cases didn’t get presented to the Executive Committee, but victims advocates spoke up to say one disfellowshipped church was not enough.

Jules Woodson, whose abuse testimony launched the #ChurchToo movement, tweeted that she was “heartbroken to find out that the church and pastor that covered up” her abuse “get a pass once again,” with only one church recommended by the credentials committee for exclusion from the SBC.

Some abuse victims “who were crushed by SBC pastors and leaders ... received nothing but silence,” tweeted Rachael Denhollander, who has assisted SBC President J. D. Greear and the ERLC with the convention’s Sexual Abuse Advisory Study. She also lamented that the Executive Committee “voted to investigate” the ERLC and “not sex abuse.”

Greear told the Executive Committee in his presidential address, “We’re not done dealing with the sex abuse crisis.” The SBC needs “a culture change that makes churches safer.”

Among action steps the SBC still needs to take, Greear said, are adding questions about abuse to the SBC’s Annual Church Profile completed by local congregations, implementing mandatory background checks for all entity trustees, and developing an ordination resource to guard against abusers in the ministry.

In addition to addressing abuse, the Executive Committee convened as some segments of the SBC expressed apprehension about perceived doctrinal drift among Southern Baptists. Leaders of the SBC’s annual Pastors’ Conference drew criticism earlier this month for announcing a conference program that includes female pastor Hosanna Wong performing as a spoken word artist and conference preacher David Hughes, known for what Baptist Press called “sermon series with sensual themes.”

In authorizing a seven-member task force to “review past and present activities” of the ERLC, the Executive Committee cited “ongoing concerns” expressed “publicly and privately” over how the commission’s “actions in relation to its ministry statements are affecting the Convention.” Included in the review will be whether the ERLC is affecting churches’ financial giving to the SBC.

The Executive Committee took a similar action in 2017, when it formed an ad hoc committee to study reports that churches were withholding funds from the Cooperative Program, in part over the ERLC’s perceived criticism of supporters of President Donald Trump. After seven months of study, the ad hoc committee reported that less than .0016 percent of Southern Baptist churches had withheld funds from the denomination’s unified channel of supporting missions and ministries, the Cooperative Program (CP)—a percentage “lower than anticipated.”

Executive Committee Chairman Mike Stone said reports are “anecdotal” but “increasing in number” that “churches are either decreasing or potentially withholding Cooperative Program funds” once again. While the Executive Committee does not govern the ERLC, it has a “responsibility” under the SBC’s governing documents to study any factors that affect CP.

Among concerns about the ERLC, a documentary released in December by Founders Ministries alleged the Commission is unwittingly pushing the SBC to loosen its commitment to biblical authority by advocating critical race theory and intersectionality as ministry tools.

The ERLC said in a statement released to Christianity Today, “The ERLC could not do what it does without the sacrificial giving of churches. We hear from our churches every single day with questions about some of the most complicated issues imaginable. In every case, we work to serve our churches with gospel-focused answers.”

Earlier this month, a group of Southern Baptists launched the Conservative Baptist Network (CBN) to counter what they perceive as “various unbiblical ideologies currently affecting the Southern Baptist Convention such as critical race theory, intersectionality, and social justice.” More than 3,200 people have joined the network, CBN tweeted.

CBN has drawn varied responses on Twitter, but Greear appeared to criticize it at the Executive Committee meeting without citing it by name.

“Don’t launch a network that says it’s about the recovery of conservative theology or the mission when it’s really not,” Greear said, claiming every SBC entity leader is committed to biblical inerrancy. “I grew up independent Baptist,” and “I’ve seen where this type of uncharitable, narrow, four degrees of separation leads. And it’s not where most Southern Baptists want to go.”

Executive Committee President Ronnie Floyd said the SBC is not “going liberal,” yet some in the convention “have sent unclear signals at times that have escalated concerns.”

“Unclarity about anything always creates confusion,” he said. But “we are not unclear about what we believe in our statement of faith, The Baptist Faith and Message.”

At least two Executive Committee members, Rod Martin of Florida and Mark Ballard of Vermont, have expressed support for the network—Martin in a CBN video and Ballard in tweets. Ballard, president of Northeastern Baptist College, told CT, he is “grateful to see the formation of the Conservative Baptist Network” and regards it like other “non-geographic networks” within the SBC.

“Some networks have formed around church planting, church size, church staff roles, etc.,” he said. “I am excited to see this new network that focuses on the inerrancy, supremacy, and sufficiency of Scripture and that focuses on all generations being encouraged, equipped, and empowered.”

Despite several matters of disagreement, unity was a major theme of the meeting, with the recommendation of a five-year vision setting specific goals to increase giving, missionaries, and churches. The Executive Committee unanimously forwarded the plan, known as Vision 2025, to the SBC. Also unveiled was a new umbrella organization that will combine the compassion ministries of the International Mission Board and the North American Mission Board as Send Relief.

Floyd compared the disagreements to what happens in a family and cited “unity around the Word of God” within the SBC.

“Hopefully, we are growing in our maturity in handling those disagreements and those challenges along the way in godly manner,” he said.

The next Executive Committee meeting is June 8 in Orlando.