The pioneering geneticist offers an ‘intellectual synthesis’ of faith and evolution.
Rebecca Randall|May 20, 2020 06:00 AM
català 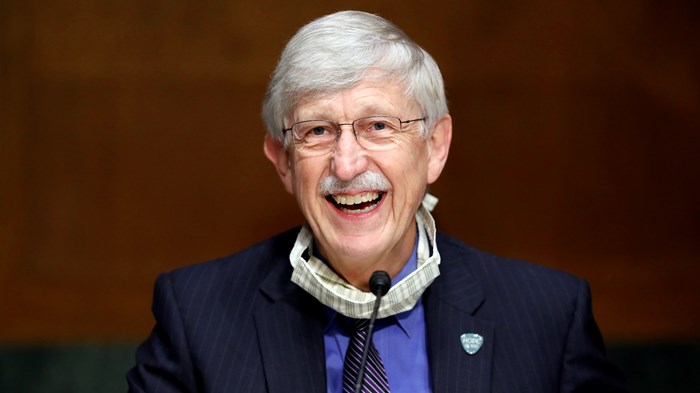 In the middle of the busiest season of his career, working 100 hours a week to rally the country’s medical response to coronavirus, National Institutes of Health director Francis Collins has been awarded the world’s top honor in faith and science.

This year’s $1.3 million Templeton Prize goes to the American geneticist and physician who led the Human Genome Project and established the BioLogos Foundation, an organization that promotes harmony between the Christian faith and evolution.

“It’s a bit overwhelming,” Collins, 70, said in an interview with Christianity Today. “The timing is pretty stunning because I’m totally immersed right now to try to develop treatments, vaccines, and testing for COVID-19.”

The government’s leading expert in biomedicine was selected for the prestigious award based on his research and service as a scientist, official, and public intellectual.

In a statement, Heather Templeton Dill, president of the John Templeton Foundation and the granddaughter of its namesake benefactor, said Collins has “encouraged greater curiosity, open-mindedness, and humility among scientists and religious believers with the aim of illuminating a pathway toward, as he has written, ‘a sober and intellectually honest integration’ of the scientific and spiritual perspectives.”

Appointed by President Barack Obama in 2008 and asked to remain by President Donald Trump, Collins is the longest-serving NIH director.

“If my calling was to try to use the tools of science to reduce the human suffering, this is an amazing job,” said Collins, who was enlisted last week to join the White House coronavirus task force. “The job is probably the best job in the world to make those dreams come true.”

During the pandemic, he has been working from his home office in Maryland, where he has a copy of Psalm 46 printed out on by his desk: “God is our refuge and strength, an ever-present help in trouble.”

Prior to his NIH role, Collins was known for his groundbreaking genetics research, as well as his intellectual arguments reconciling God and science and his willingness to foster discussion around the two.

He became a Christian during his medical residency, but like many scientists, he stayed quiet about his faith early on. As his career grew, he became more outspoken about his beliefs.

“You always are a little worried that someone will conclude from that you’re not as rigorous with your science,” he said. “By the time I got the opportunity to say more, I felt I was less likely to suffer the consequences.”

Collins pioneered a technique in genetics called “positional cloning” to identify genes responsible for diseases including cystic fibrosis, neurofibromatosis, Huntington’s disease, and Hutchinson-Guilford progeria syndrome, a rare form of premature aging. He also led the Human Genome Project from 1990 to 2003, which mapped the 3 billion DNA letters that make up the human genome and remains the largest biological collaboration project in history.

As the director of the National Human Genome Research Institute, Collins balanced meetings at the White House and with congressional leaders, top-level scientists, patients, and trainees in any given day, according to Praveen Sethupathy, who was mentored by Collins for his post-doctorate.

“I was amazed at how he gave each and every one of these activities his complete effort and full attention,” said Sethupathy, now associate professor of biomedical sciences and the director of the Center for Vertebrate Genomics at Cornell University. “He treats every person, young or old, educated or not, with the dignity and respect they deserve as human beings … his humble posture toward others speaks the loudest and gives the most life to people around him.”

Georgia Dunston, a geneticist who worked with Collins at the Human Genome Project, applauded his efforts to champion the work of black and minority researchers.

“Francis really appreciated not only doing the science but the perspectives [diversity offers], the kinds of questions you ask and how you approach it are just as important as doing the work,” said Dunston, who helped establish the National Genome Center at Howard University, the only program of its kind on a historically black campus, with Collins’s support.

Because of his interest in researching type 2 diabetes, Collins helped secure funding to obtain DNA samples from Africans in Nigeria and Ghana, which furthered Dunston’s goal of understanding the disease among African Americans.

Dunston said she enjoyed being able to be open about her own faith with him while working on the Human Genome Project. She told CT she was impressed by his boldness while he worked at the genome institute and likened him to Paul being “not ashamed of the gospel” (Rom. 1:16).

Collins’s public engagement around faith and science began to pick up after a 2003 lecture series at Harvard Memorial Church. Each night, 600–700 students packed in to hear him speak, and they still had questions when it was over. “Most were not believers,” said Collins. “I thought, ‘Wow. There’s a real hunger for this.’”

At the time, the science-religion conversation was dominated by extreme voices: new atheists that belittled the intellectual rigor of faith, and fundamentalists who saw mainstream science, particularly evolution, in contradiction to Scripture. Collins believed he could help people see that an “intellectual synthesis” is possible.

“I think of God as the greatest scientist. We human scientists have an opportunity to understand the elegance and wisdom of God’s creation in a way that is truly exhilarating. When a scientist discovers something that no human knew before, but God did—that is both an occasion for scientific excitement and, for a believer, also an occasion for worship,” he said in a 2001 CT interview.

“It makes me sad that we have slipped into a polarized stance between science and religion that implies that a thinking human being could not believe in the value of both. … I find it completely comfortable to be both a rigorous scientist, who demands to see the data before accepting anybody’s conclusions about the natural world, and also a believer whose life is profoundly influenced by the relationship I have with God.”

In 2006, Collins wrote The Language of God: A Scientist Presents Evidence for Belief, which “argues that belief in God can be an entirely rational choice and that the principles of faith are, in fact, complementary with the principles of science.” It became a bestseller and was published in 24 languages.

After such positive reception, Collins and his wife, Diane Baker, a founding faculty member and director of the genetic counseling program at the University of Michigan, founded BioLogos in 2007. Not long after, he stepped down to take the job at the NIH.

“Francis’s vision in starting BioLogos was to influence not only the content of the national conversation so that there is more scientific, philosophical, and theological depth, but also the tone and tenor of the dialogue so that there is greater civility and mutual respect even in disagreement,” said Sethupathy, now a board member at BioLogos.

Collins’s position leading the government agency requires additional sensitivity in how he speaks publicly about his faith. He said he turns down most invitations and clears the rest of his talks with the government ethics office.

He recently addressed questions about faith in the pandemic in online chats hosted by BioLogos, including one this week with evangelical leader Tim Keller.

Collins says he still feels “heartache” for young people in a crisis of faith and continues to receive emails from high school and college students who contact him while searching for footing amid the skepticism toward science they have been taught in their faith communities.

“They are very concerned about the collapse of something that is deeply important to them,” he said. They worry their biblical perspective will fall apart when confronted with scientific evidence that the Earth is billions of years old. Despite all he is juggling, Collins responds. “I just feel like this is something too important when someone else is pouring their heart out to me.”

In addition to his own book, he recommends other resources released by BioLogos. “If there’s a way that we can actually give them some hope and reassurance that this is not a requirement that you do not have to pick one or the other, then I have done something useful,” he said.

In the past 10 to 15 years, pastors tell Collins, the debate over the origins of the earth hasn’t seemed as divisive. “It is less the case that a church gets blown apart for disagreeing with the young-Earth perspective,” he said.

The last time Pew Research surveyed people about evolution in 2019, in fact, most Christians thought that humans evolved and that God had a hand in it. And in a recent poll from the National Association of Evangelical (NAE), leaders agreed that it is acceptable to have different views. “This is a not a salvation issue. Christians can disagree with how to interpret,” said Collins. “That’s encouraging. At the same time, there’s still a long way to go.”

“Francis Collins and I don’t see eye to eye on some of the details about how science and Christianity fit together. But, he has always been willing to take the time to enter into gracious dialogue with me, publicly, and one on one.” said Fuz Rana, vice president of research and apologetics at Reasons To Believe, which promotes scientific evidence for an old Earth but not human evolution.

Rana recalled meeting with Collins during a last-minute trip to Washington, DC. “His willingness to spend time with me when he didn’t have to demonstrated to me his genuine commitment to build bridges with people with differing perspectives than his,” Rana said.

Collins said if he ever leaves government service, he’ll return to writing for a faith audience, starting with an update to The Language of God.

For now, though, “I love the job because I am so excited right now about the pace of scientific progress, particularly in biomedicine,” he said. “We have the opportunity to solve mysteries I didn’t think we’d solve in my lifetime.”

In addition to the current efforts to battle COVID-19, Collins has a front-row seat as researchers work to address widespread cancers with immunotherapy, use gene editing to cure sickle-cell disease, and develop a vaccine that really works for HIV.

Collins will formally receive the Templeton Prize in a virtual ceremony later this year.

The Templeton Prize recognizes individuals whose achievements ask the big questions about the universe and humanity’s place in it. Other Christians who have won the annual award include physicists John Polkinghorne (2002), Freeman Dyson (2000), and Paul Davies (1995), as well as philosopher Alvin Plantinga (2017).

The prize has also honored global religious leaders Billy Graham (1982), Mother Teresa (the inaugural award in 1973), and Archbishop Desmond Tutu (2013). Last year’s Templeton Prize went to physicist Marcelo Gleiser, an agnostic who encourages the religious to embrace the mysteries of science and faith.

Christianity Today is also a recipient of Templeton Foundation funding.