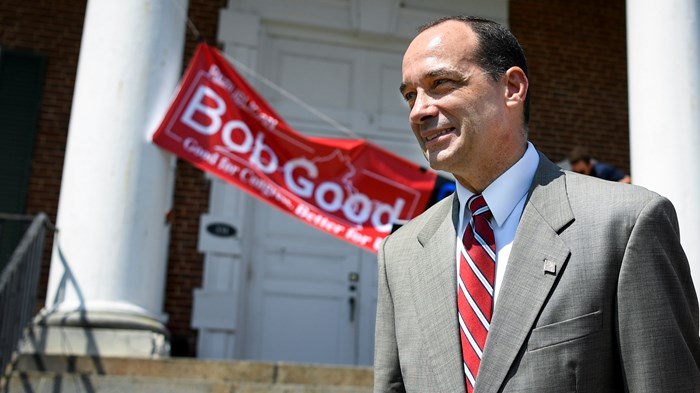 Editor’s note: This profile is the first in a CT series featuring evangelical candidates from both parties who are running for Congress in November.

Bob Good has the kind of name begging to be on a political sign. He’s “Good for Congress,” after all (and even “better for us” according to his slogan).

Good, who calls himself a “biblical constitutional conservative,” is the Republican nominee for Virginia’s 5th Congressional District this November. The district went big for President Donald Trump in 2016. Most analysts project Good, a first-time Congressional candidate and endorsed by Trump, will defeat Democrat candidate Cameron Webb.

Neither Good nor Webb are VA 5’s incumbent, however. Before last summer, first-term Republican Representative Denver Riggleman was expected to keep his seat. But in July 2019, Riggleman officiated the same-sex wedding of two of his former campaign volunteers. When word got out, the local county Republican Committee passed a unanimous vote of “no confidence” in Riggleman. Two months later, Good launched his own campaign.

“I challenged a sitting Republican incumbent to give conservative Republicans in our district a choice … between a more moderate Republican, who was brand new, in his first term, versus a true conservative,” Good said.

Trump originally backed Riggleman (in fact, Trump gave his “Total Endorsement” on Twitter). Throughout the primary battle, Riggleman and Good sparred publicly over which was the most enthusiastic Trump supporter. Ultimately, in a pandemic-era drive-by district convention last June, Good beat Riggleman with nearly 60 percent of the vote.

VA’s District 5 is the state’s largest geographical district. It also may be one of the most socially diverse. It includes the campuses of both the University of Virginia in Charlottesville and Liberty University, Good’s alma mater (and former employer), in Lynchburg.

Good spent 15 years working for Liberty as a senior associate athletic director and executive director of the athletics’ booster club, which means he was the chief fundraiser for the Christian university’s sports program. It’s a particular skill, fundraising—and in today’s political world a necessary one for anyone seeking office.

But more than his role as the Liberty Flames Club president, Good credits the sport of wrestling with preparing him for this job. He wrestled at Liberty on a partial scholarship and met his wife, Tracey, a cheerleader, there. “There’s a saying in the sport that once you’ve wrestled, everything else in life is easy,” Good said.

Good grew up in Lynchburg and has spent much of his life orbiting Liberty, founded by the late Jerry Falwell Sr. Good said when his parents moved to Lynchburg decades ago so that his father could attend seminary, the Falwell family helped support them financially.

“My family was like thousands of other families in the Lynchburg area who felt uniquely special to Dr. Jerry Falwell,” Good said. He became a born-again Christian at nine years old in the pews of Thomas Road Baptist Church, where Falwell Sr. was the pastor. Those years were difficult, he said, because his family struggled for money while his dad attended school and his mom raised four boys close in age.

Controversy has swirled around Falwell’s son and successor, Jerry Falwell Jr. The university’s board of trustees ultimately asked for Falwell Jr.’s resignation in August after news broke that Falwell’s wife had an affair with a young business associate, who said Falwell knew about the sexual relationship over several years. Good wouldn’t comment on Falwell’s behavior but said Liberty’s “best days are ahead.”

“I look forward to the board of trustees selecting a new president who will fully embrace the mission of the school in their personal life,” Good said.

The Falwell family has long been political. Falwell Sr. was cofounder of the Moral Majority movement, which mobilized conservative Christians to political action in the 1980s. Falwell Jr. has been an outspoken supporter of President Trump.

Another Falwell son, Jonathan, now serves as pastor of Thomas Road Baptist Church where Good and his family remain members. In a tweet last March, Pastor Falwell called Good his “good friend” and said he’d do “an amazing job supporting and protecting conservative values” for Virginians.

Still, Good said the Falwell family had no influence on his decision to run for political office—at least outside of his role as a Liberty University wrestler.

In a campaign ad, a gym-clothes-clad Good wrestles his son repeatedly to a gym-floor mat. “In Congress, I’ll take down the bad ideas from Pelosi and the liberals,” Good promises the camera. Every “bad idea” gets a “pin”: government-run healthcare. Defunding the police. The Green New Deal. “I’ll put liberal ideas in a headlock,” Good said, with just a hint of a smile.

Good said his childhood, marked as it was by financial need, helped shape his belief in the essential role of the American government: “It should be limited, and it should be a facilitator of our freedoms and our rights to life, liberty, and the pursuit of happiness,” Good said. “Pursuit being a key word there, by the way.”

Good calls the Bible his “guiding personal true north,” a designation he gives “on a political level” to the US Constitution. He says whenever he’s asked how he will honestly “represent everybody” given his strong Christian faith, he points to America’s founders.

But it’s a quote from one founder in particular—John Adams—that Good has memorized: “Our Constitution was intended for a moral and religious people and is wholly inadequate to the governance of any other,” said Adams, circa 1798, as quoted by Bob Good, 2020.

“All of the principles outlined in the Declaration of Independence and our founding documents were spoken first in the pulpits,” he said. “It’s the pastors and the churches that led the Revolution.”

Good organized a handful of campaign events specifically for pastors, discussing his positions and emphasizing religious liberty issues for churches. He gained endorsements from fellow Christian Carol Swain, the retired Vanderbilt University political scientist who serves as an adviser for Black Voices for Trump, and Travis Witt, a Virginia pastor and Tea Party leader.

Good’s policy positions—both the “for” and the “against”—strike at most major Republican buzzwords: As a Christian, he calls the “sanctity of life from conception” a “personal priority.” He wants to put “American workers” first.

He sees these stances as a way to live out the biblical teachings he believes in and “the Judeo-Christian values on which our nation was founded.” He said his faith also motivates him to challenge what he sees as socialist priorities on the Left.

He applauded Trump’s decision to attend the March for Life, the country’s largest pro-life gathering, held in Washington, DC. He says Trump is a champion for religious freedom, for the southern border, and for Israel.

“I believe while the president isn’t perfect, as I am imperfect … I do believe the president has been the best friend to people of faith certainly in my lifetime,” Good said. He thinks the president will win in November.

Though the two have never met in person, Trump attended a “tele-rally” for Good a few weeks ago and has officially endorsed him now that he’s his district’s Republican nominee.

Good’s blue-checkmark Twitter feed includes niceties from a pre-Trump political era (“I was grateful today to meet … I’d like to thank … Today we visited …”), but you can also see echoes of the president’s trademark brashness in Good’s campaigning. When Good defeated Riggleman in the Republican primary and Riggleman questioned the legitimacy of the drive-by vote, Good said, “That’s what losers say.”

Nevertheless, Good says his political bid hasn’t changed anything about him personally. “We kind of live our lives just like we did before the race,” he said of his family. “Our desire … is to make him known, to glorify him, and to influence others for eternity. … It’s been a great journey. We’ve enjoyed most of it.”