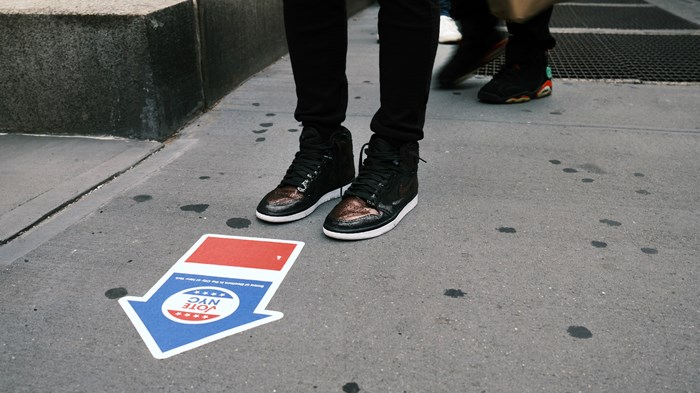 Despite their opposing views of who should win the upcoming election, Republicans and Democrats share a sense of urgency over the 2020 presidential race. Both parties would have voters believe that this is “the most important election of their lifetimes” and they have a responsibility to vote in the right candidate.

It’s always awkward to be a nonvoting Christian during campaign season, and this year, nonvoters really feel the pressure. The enthusiasm over the 2020 presidential election, combined with increased voting options due to the pandemic, has already led to record-setting early voting numbers. Nonvoting is assumed to be a decision made out of resignation, apathy, or lack of concern for the country.

While some religious traditions abstain from voting because they do not take part in politics at all (think Jehovah’s Witnesses) or because they separate themselves from broader society (the Amish), evangelical nonvoters say they can be politically engaged beyond the ballot box.

“I’m still involved with changing things, but I didn’t want to do that in the name of a political party,” said Natasha Kennedy, an evangelical in Washington State who has never voted in a US election and doesn’t plan to this year.

Instead, she pushes back against both parties and advocates for Christ’s kingdom without any allegiance to a political platform.

Her position dates back to when she turned 18. As she considered entering the mission field, Kennedy decided she would demonstrate her devotion to Christ and his kingdom by not voting in US elections.

Like many Christian nonvoters before her, she saw the act of casting a ballot as a sign of approval for a political power structure that in many ways opposed the way of Christ. She couldn’t do it. If Jesus brought about his kingdom by laying down his rights and spurning political power, Kennedy wanted to follow his example.

“It was my way of being part of his kingdom without doing it the world’s way,” she said.

Four presidential elections later, Kennedy and her husband, Lindsay, an Australian citizen (who voted while living in Australia where voting is mandatory), have together cemented their conviction that they will work for change by speaking up about their convictions around biblical and moral issues but won’t do so within the US political parties.

This commitment sometimes puts them at odds with fellow Christians in their family and at their nondenominational church. Most Christians do vote, and white evangelicals historically have higher turnout rates than other groups. They hold a range of views on how Christians should approach voting (see “When Is It a Sin to Vote for a Political Candidate?”), and some suggest that biblical principles on public justice compel Christian citizens in a democracy to elect ethical leaders into positions of authority.

While voting Christians on both sides of the aisle tend to see the Kennedys’ nonparticipation as passive, the couple stands by their decision—especially in a year when they believe partisan divisions are damaging the church’s witness.

The Kennedys believe their nonvoting stance also removes a barrier to conversation and evangelism. Lindsay Kennedy said it enhanced his credibility with students as a Bible professor. The students knew when he pushed back on their political positions, he was not simply trying to convert them to his party.

John Mark Hicks, theology professor at Lipscomb University, shares their concerns about the church’s allegiances to the government, fearing Christians have ceded moral authority in exchange for corrosive political clout. “The local church has traded its birthright for a pot of political power porridge,” Hicks said.

His beliefs on political involvement stem from the namesake of the school where he teaches and the founder of the Churches of Christ denomination, David Lipscomb.

Lipscomb modeled a form of nonparticipation that was still socially engaged. He wrote about societal injustices: greed, poverty, labor conditions. He was always bearing witness, according to Hicks, but he would not vote.

Lipscomb believed elected officials forced their morality on to the general population, a coercive practice he opposed, even when the morality in question was a Christian ethic. He saw the deadly consequences of Christian men forced to turn on each other when their countries conscripted them to fight in the Civil War.

Nowadays, Hicks and the small portion of Churches of Christ’s 1.1 million members who share Lipscomb’s views on the topic submit to earthly governments but don’t necessarily endorse them.

Hicks doesn’t fly the American flag or recite the pledge. Every four years he reevaluates whether voting in an election would demonstrate an allegiance to Christ or the world. He says he maintains his right to critique the government or social evils like racial injustice and abortion, even if he chooses not to vote for the leaders tasked with putting policies in place to address them.

“When I critique, I do so with the intention of critiquing from the kingdom of God, not as a citizen,” Hicks said. “My right comes from God, not from my citizenship.”

Trey Finley, a Church of Christ member and executive director of the pastoral-care ministry eleven:28 Ministries, used to hold the Lipscomb view of active nonparticipation—he was an outspoken advocate who abstained from voting. That changed ahead of the last presidential election.

Finley realized Trump’s election might undo portions of the Affordable Care Act (ACA), which Finley depended on for treating a chronic medical condition. If his well-being, as a relatively healthy 41-year-old, was threatened by losing ACA protections, he asked himself, how much more might be at stake for others who were not as healthy or financially secure? He changed his perspective and now sees his vote as a way to side with the vulnerable and the oppressed.

But the change has come with a cost, as relationships have been damaged by differing political opinions on the current president. He has left Facebook and largely withdrawn from political conversations.

“It is a daily struggle to know how to best relate to those who disagree with me in this,” he said. “Relationships have been wounded and broken by the past four years, and I struggle with how to manage that.”

Nonvoting isn’t uncommon. In 2020 some believe no candidate is worth political differences destroying relationships. But most people don’t participate out of disinterest, lack of faith in the government, or confusion around the process. Far fewer feel a moral or Christian obligation not to vote.

In 2016, 43 percent of the eligible voting population in the US did not cast a vote. Among nonvoters, a small minority—4 percent—cite a religious objection to the practice, according to the 100 Million Project, a Knight Foundation survey on nonvoting.

The controversies surrounding the two candidates in the last election, Trump and Hillary Clinton, even had some evangelicals who typically vote staying home. (Ahead of the 2016 election, 16 percent of likely evangelical voters in a LifeWay Research survey said they were “undecided,” but this year, it’s just 7 percent.)

Like other Christians who worry that voting will betray their allegiance to God, Anabaptists have historically subscribed to the doctrine of two kingdoms, which says the kingdom of God—the church and those who accept the lordship of Christ—is fundamentally opposed to the kingdom of this world, those who do not know Christ. They believe while there is some interaction between the two kingdoms, like paying taxes and obeying laws, Christians must not become overly involved in the kingdom of the world by engaging in the political process.

The Mennonite Church USA remains committed to pacificism and nonviolence, but teaching on nonparticipation in the largest Mennonite denomination has diminished over the past 50 years. Today, only about 1 in 10 Mennonites does not vote, according to Steve Nolt, an expert in Amish and Mennonite communities at Young Center for Anabaptist and Pietist Studies at Elizabethtown College.

During the 2016 presidential election, the Mennonite publication Anabaptist World published a range of perspectives on the election, almost all explicitly in favor of voting. “As members of God’s kingdom, we will always clash with human power structures,” wrote one voter. “When Mennonites vote, we are not voting for who we support to lead us. We are voting for who we would rather struggle against.”

The practice of abstaining from voting remains high (over 90%) in some Anabaptist circles, particularly among the Amish and Old Order Mennonites, Nolt said.

But that hasn’t stopped efforts to rally Amish voters in Pennsylvania and Ohio. In September, a parade of Trump supporters in Fredericksburg, Ohio, included several Amish buggies displaying pro-Trump signs like “Amish for Trump.” (The parade was organized by Chris Cox, founder of Bikers for Trump PAC.)

In addition to not voting, the Amish avoid paying into Social Security (they object to insurance and believe the church ought to care for needs in the body) and generally oppose state regulation. Still, the Amish pay taxes and pray for government officials, even if they did not choose them.

As the campaign season concludes on November 3, the Kennedys plan to watch the election returns and spend time in prayer. They’ve followed this race more closely than any previous election, and they want to see its conclusion, even if they didn’t participate.

Hicks will also pray, but for him, November 3 is just another Tuesday. “Election Day is a nationalistic, political event,” he said. “It does not shape my kingdom allegiance or practices.”

Meet the Evangelicals Who Won’t Vote for Trump, ...