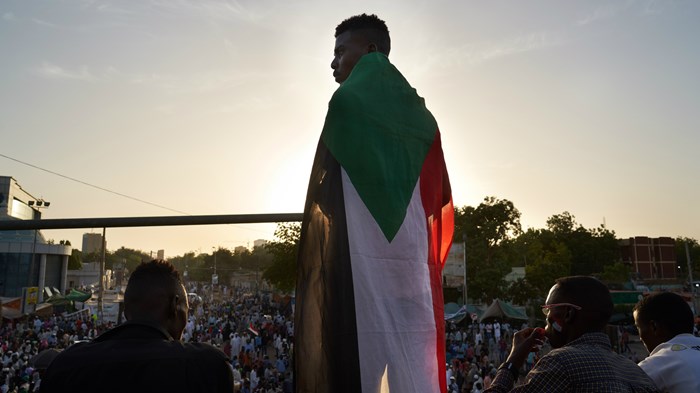 Their nation’s historic agreement, announced Friday, to normalize relations with Israel does not directly impact their minority community, nor the trajectory of their burgeoning religious freedom.

But the symbolism is powerful, particularly to the North African nation’s majority Muslims.

Sudan was once the champion of Palestine.

In 1967, the Arab League convened in the capital city of Khartoum to adopt three No stances concerning Israel.

No peace. No recognition. No negotiation.

Reversing course is the type of decision that can make or break a nation. And Sudan is in the middle of a post-revolutionary transition, mired in economic malaise. Inflation has exceeded 200 percent.

The agreement to normalize relations followed the United States’s announcement to lift Sudan’s designation as a state sponsor of terrorism. Assigned in 1993 during the 30-year Islamist dictatorship of Omar al-Bashir, the accompanying sanctions starved Sudan of foreign investment and business development.

Massive popular demonstrations removed Bashir from power in April 2019. A series of reforms followed, including steps to improve religious freedom.

But the designation was removed only after Sudan agreed to pay $335 million to the US, earmarked for American victims of terrorism launched from Sudanese soil.

Sudan is now eligible for relief on its $60 billion debt, with access to global finance. Negotiations are already underway with the International Monetary Fund.

Initially, American policy linked removal of the terrorism designation to follow after a normalization agreement with Israel. Prime Minister Abdalla Hamdok strenuously objected, saying Sudan’s transitional government had no authority to take such a momentous decision.

Both nations proved flexible. The US addressed terrorism first, and Sudan responded.

“Today, Khartoum is saying yes to peace with Israel, yes to recognition of Israel, and yes to normalization with Israel,” Israeli Prime Minister Benjamin Netanyahu said on Friday. “This is a new era, an era of true peace.”

President Donald Trump agreed, calling it a “great day in the history of Sudan.”

But as the three nations celebrated, one member of Sudan’s 11-member Sovereignty Council expressed his opposition, saying he had not been consulted.

Sudan had already signaled that full accord could only come with ratification by the national parliament, which has yet to be formed.

CT spoke with eight leaders—three Sudanese, four American, and one Palestinian—concerned with the course of religious freedom and regional stability.

Weran is optimistic the deal with Israel will open the economy, foster technological growth, develop the agricultural sector, and alleviate poverty.

Originally from the Nuba Mountains in Sudan’s marginalized south, she is encouraged by the movement toward peace with militant rebel groups in her region, and in Darfur.

One reason the formation of parliament has been delayed, she believes, is that it must incorporate all holdout forces.

Normalization with Israel will cement Sudan’s transition to democracy, she believes. But many Muslims might vote against it.

About 4 in 5 oppose normalization (79%), according to the 2019–20 Arab Opinion Index released earlier this month. A similar share (81%) support Sudan’s revolution.

And 1 in 4 Sudanese (24%) named Israel as the greatest threat to their nation, topped only by the United States, named by 37 percent.

“Palestine is a sentimental issue, and the [Bashir] government promoted it aggressively,” said Tawfig Saleh, the Muslim founder of Unity International, a Sudanese NGO promoting religious freedom and coexistence.

“But we cannot move forward without good relations with our neighbors.”

Even so, Saleh doubts the poll’s finding of 79 percent opposition is accurate, especially now after Sudan’s removal from the US terrorism list. Also out of date, in his view, is the media reporting about the weight of political groups announcing opposition to the deal.

Only dozens came out to protest.

Saleh does wish the transitional government had done more to prepare the ground for previous reforms. The repeal of the apostasy law, for example, was not accompanied by efforts to convince the public. He thinks too many officials, though in agreement, are more eager to please the international community.

But here, said the co-chair of this week’s Khartoum-based International Religious Freedom Roundtable, Sudan needed the US push.

“They accelerated the process,” Saleh said, adding he is eager to pray in Jerusalem. “The fear of normalization could have stopped it.”

Ismail Kanani, director of the Sudan Bible Society, said Christians are also eager for pilgrimage to Israel. A longtime participant in interfaith dialogue, he said since the revolution these conferences are no longer a “show.”

Kanani agreed with Saleh, however, that the Sudanese people might be confused over normalization. The government has not sufficiently explained its rationale.

But he also doubts the poll numbers, recognizing how many Sudanese were overjoyed that the terrorism designation was lifted.

“It will be different in one month, once they see the benefits,” Kanani said, “and parliament will definitely vote Yes.”

Scott Gration, the former Obama-era US special envoy to Sudan, said that hunger and poverty might drive people back to the streets in protest. And in a worst-case scenario, the military might hijack the democratic transition.

There is a brief window to help.

“Sudan invested [its] short-term stability for long-term benefit,” he said. “The US and international community need to rally around Hamdok, right now.”

Raised as a missionary kid in east Africa, the decorated US Air Force veteran fears President Trump pushed normalization for the sake of his reelection campaign. American officials will celebrate another nation normalizing with Israel, after which Sudan might get pushed aside.

It will require “heavy lifting” to rebuild the economy.

Pleased with the peace deal itself, Gration is disappointed with how it happened. He has been arguing to lift the terrorism designation since 2009.

“We’ve moved the goalposts so many times,” he said. “This linkage might make it very difficult for the Sudanese in the long run, especially if the Palestinians continue to be marginalized.”

The word linkage is too tame, said Daoud Kuttab, a Palestinian evangelical. To him, the deal is outright blackmail.

“This was not a step that Sudanese leaders wanted to take,” said the Amman-based journalist. “It is sad to see this unfair pressure.”

Palestinian leaders have condemned Sudan’s decision as “shameful” and another “stab in the back.”

Most Arabs sympathize. Zogby Research Services released a poll earlier this month that found 6 in 10 Egyptians, Saudis, and Jordanians find normalization with Israel “undesirable,” behind 7 in 10 Palestinians. Of the five nations surveyed, only the United Arab Emirates (UAE) has a net positive opinion (56%).

But times are changing: apart from Palestine, 7 in 10 respondents agreed that normalization agreements are “likely,” even without a peace agreement with the Palestinians.

There is no general Islamic opposition to peace with Israel, it said.

“If the ruler sees weakness among the Muslims, as is our case these days, especially in this country,” Sheikh Abdel-Rahman Hamed, head of the SSO’s fatwa department, told the Times of Israel, “and if he sees it is in our interest to forge peace, then he must do it.”

Either way, the fatwas may not matter.

According to the Arab Opinion Index, 74 percent of Sudanese say that the government has no right to use religion to win support for its policies.

But the existing popular opposition leads Knox Thames to fear that Sudan’s deal is “hollow,” compared to the normalization agreements Israel signed with the UAE and Bahrain.

The Gulf states have been building relationships with Israel for years, said the former US State Department special advisor for religious minorities. And ruled by royal families, their people had no share in the decision.

While Sudan will begin discussions and even preliminary accords with Israel, the parliament vote eventually looms.

“We should be happy Israel and Sudan are talking, and let things take their natural course,” said Thames.

“If pushed too far too fast, we risk seeing the gains reversed.”

But the US was not wrong to use a carrot-and-stick approach, said Eric Patterson, executive vice president for the Religious Freedom Institute. Rogue states like Sudan need to be pushed to honor their agreements on human rights and to behave well in foreign policy.

But now that Sudan has embarked on reform in recognition of its national self-interest, such “baby steps” should be rewarded, he said.

Given that normalization with Israel will result in new financial opportunities, it is time for the transitional government to deliver on the most basic task of governance: economy and security.

So far, Israel has pledged $5 million in wheat supply, while USAID will provide an additional $81 million in economic assistance.

Whatever opposition exists, Sudan will hold the course.

“The Israel issue alone,” said Patterson, “will not stall the opening of Sudan's oppressive government practices.”

Its timing was “providential.”

Originally scheduled for March, COVID-19 delayed the conference until early October. Widespread floods and economic protests then pushed it back an additional two weeks.

Normalization was not on the agenda. But now it can be celebrated.

Devlin, missions pastor of Infinity Bible Church in New York City, has been visiting Sudan since 2006. Twice a year his REDEEM! organization arranges an encouragement dinner for local pastors and Sudanese officials.

It is also sponsoring the roundtable, he said.

Coptic Christian Raja Nicola is the patron. As a member of Sudan’s transitional Sovereignty Council, Devlin recognizes her presence as a sign of the changing nation.

So too are three other gains: the stated commitment for a secular state, the criminalization of female genital mutilation, and the repeal of the apostasy law.

“Normalization with Israel is the fourth pillar of democracy in Sudan,” he said.

“And negatively, it is the fourth nail in the coffin of the Bashir regime.”

James Chen, vice president of global operations at the Institute for Global Engagement, compared Sudan’s transition to the example of Myanmar. Aung Sang Suu Kyi was a Nobel Prize-winning leader who championed the cause of an open, democratic society.

Once voted into office, however, she resorted to populist appeals. Religious freedom—particularly for the Muslim Rohingya—took a dramatic turn for the worse.

So did Myanmar’s international standing.

Sudan’s opposition to normalization stems from prevailing anti-Israel attitudes, Chen said, rather than territorial conflicts. Likely it will not derail this deal, nor the democratic transition.

“Sudanese leaders are demonstrating the courage and leadership that Myanmar did not,” Chen said. “For this, they should be applauded.”

“What benefit did we receive from false enmity?” said the seminary officer, recognizing that some opposing parties do have weight.

“But people are coming to their senses, to put the nation first.”

Sudan was not forced to normalize, she said. No matter how desperate the economy, the nation had a choice.

But if there is any complaint, it is with the $335 million price tag.

“We overthrew a dictator,” said Weran. “We should be rewarded, not paying the price for the sins of our former government.

“But at least Sudan is taking responsibility, to make amends.”