Christians in the Gulf hope historic UAE-Israel normalization might also lead to a deal with Palestinians.
Jayson Casper|August 17, 2020 12:43 PM 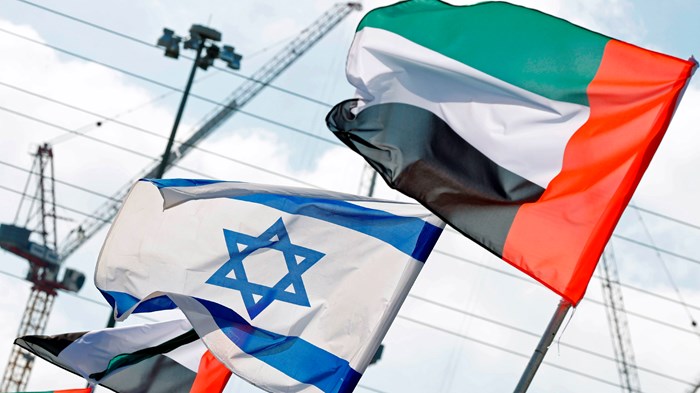 Image: Jack Guez / AFP / Getty Images
The flags of Israel and the UAE line a road in the Israeli coastal city of Netanya on August 16, 2020.

In forging the first Arab-Israeli peace deal since 1994, President Donald Trump paid homage to a patriarch.

He named the historic normalization the “Abraham Accord.”

The familiar Bible character “is referred to as ‘Abraham’ in the Christian faith, ‘Ibrahim’ in the Muslim faith, and ‘Avraham’ in the Jewish faith,” explained David Friedman, US ambassador to Israel.

“And no person better symbolizes the potential for unity, among all these three great faiths.”

In signing the accord, the United Arab Emirates (UAE) joined Egypt and Jordan as the only Arab nations to make peace with Israel. Telephone lines are already being connected between the Gulf nation and the Jewish state, with preparations underway to exchange embassies.

It may open a new era. Fellow Gulf nations Bahrain and Oman signaled their support, while Saudi Arabia did not oppose it.

“This is a once-in-a-generation diplomatic achievement, but I predict it will be the first, not the last,” said Johnnie Moore, an evangelical leader engaged in behind-the-scenes advocacy. He and bestselling novelist Joel Rosenberg led an evangelical delegation to the UAE in October 2018 (as well as two delegations to Saudi Arabia), and Moore has personally visited three more times.

“The Abraham Accord,” he said, “will prove to be the moment when the grievances of the past no longer overpowered the promises of the future in the Middle East.”

A hero of faith to both Christians and Jews, ‘Ibrahim’ is already a central figure in the UAE. The nation opened its 2019 Year of Tolerance by welcoming Pope Francis in the first ever papal visit to the Arabian Peninsula. And in commemoration, it closed the year by announcing the inauguration of the Abrahamic Family House, dedicated to interfaith harmony.

The complex will house a church, synagogue, and mosque on an island near the capital of Abu Dhabi.

The “Human Fraternity Document” signed during the visit by the pope and the Cairo-based Grand Sheikh of al-Azhar, the foremost seat of religious learning in the Sunni Muslim world, continued UAE and other Muslim efforts to preserve peace with Christians after the rise of ISIS.

“The UAE has agreed very strongly to represent us … with respect to Christianity, because in the Middle East it is not treated well,” Trump stated. “It is treated horribly and very unfairly.”

The UAE has been the exact reverse, according to the Bible Society in the Gulf.

“The degree of tolerance and freedom that the Christian communities exercise in UAE is immense,” said general secretary Hrayr Jebejian.

“An advocate for interfaith dialogue, the UAE has enabled different nationalities and cultures to live together in peace and harmony.”

Evangelical Christians have been “uncritically supportive” of Israel, while other traditions want to see a “just solution” for the Palestinian people.

“The one thing we agree on,” he said, “is that this development is a definite win for the UAE.”

Justin Meyers, associate director of the al-Amana Centre in Muscat, Oman, hopes to see peace spread in the region. His institution, an outgrowth of 125 years of cooperation between Omani Muslims and the Reformed Church in America, creates safe spaces for people of different cultures and religions to build relationships of trust, peace, and reconciliation.

“I applaud open diplomatic channels,” he said. “The question is how the UAE will use this new official relationship to help the Palestinians.”

By signing the Abraham Accord, they have already broken ranks.

In 2002, the Saudi-led Arab Peace Initiative promised normalization of relations with Israel in exchange for full withdrawal from the occupied territories, a just settlement for Palestinian refugees, and establishment of a Palestinian state with East Jerusalem as its capital.

Alternating between rejection and cautious acceptance by subsequent Israeli prime ministers, it was endorsed by the Arab League as the joint approach for peace. The Palestinian Authority expressed its support.

The UAE has taken a different path.

“This is the end of the Saudi peace plan,” said Salim Munayer, executive director of the Musalaha reconciliation ministry, based in Jerusalem.

“You cannot have peace without justice, which means [the UAE-Israel deal] is a superficial peace, at best.”

The region has changed in the past two decades. While the UAE and other Gulf states have been quietly nurturing relations with Israel for years, increased tensions with Iran are forcing a public realignment. So do the political needs of both Trump and Netanyahu, he said.

Emirati officials state an important part of the deal stems from their concern for Palestinians. They extracted a promise from the Israelis to suspend Netanyahu’s election promises to Jewish settlers to annex West Bank land.

“The UAE is using its gravitas and promise of a relationship to unscrew a time bomb that is threatening a two-state solution,” said Anwar Gargash, minister of state for foreign affairs.

Munayer is pessimistic. While there is potential for the deal to result in added regional stability, he believes the independent path taken by the UAE will hurt the Palestinian cause.

But at least it breaks the “clash of civilizations” narrative and its monolithic stereotypes of the Arab and Muslim worlds.

“We cannot generalize,” he said, “about Muslim, Christian, or Jewish positions.”

Including Netanyahu’s. While a spokesman for Israel’s 500,000 West Bank settlers said the prime minister “deceived us,” Netanyahu stated his annexation plans were only on “temporary hold.”

Moore, however, thinks that within the context of Trump’s “Deal of the Century,” the Abraham Accord advances peace with the Palestinians “100 percent.”

“It would be almost unthinkable for Netanyahu, or any future Israeli prime minister, to humiliate the UAE leadership by suddenly reneging on this deal,” he said, “and applying sovereignty over parts of the West Bank outside the context of a broader, final peace agreement with the Palestinians.”

But neither evangelical leader is optimistic that will happen, placing blame on the Palestinian leadership.

And 18 years after the Arab Peace Initiative, Rosenberg hears from regional officials they are ready to move forward.

“They want to help the Palestinian people,” he said. “But the leaders of the UAE, at least, have stopped giving [PA President] Abbas the keys to regional peace.”

Munir Kakish, president of the Council of Local Evangelical Churches in the Holy Land—which represents congregations and ministries located in the West Bank, East Jerusalem, and the Gaza Strip—is also ready to move forward.

“It is time for elections and to have new faces run the country,” he said, noting most Palestinian leaders are over 60 years old. “It is time for the PA to evaluate itself, and have real changes, before we point our fingers at others.”

Palestinian divisions have also hurt their cause, Kakish said, allowing Israel to take advantage. And sovereign nations like the UAE will increasingly follow their own judgment in foreign policy.

“This is a breakthrough, opening the door for others like Bahrain and Oman to possibly follow,” said Knox Thames, senior fellow at the Institute for Global Engagement and former special advisor for religious minorities at the US State Department. “But it should be remembered this does not address the plight of the Palestinians in any lasting way.

“Until a pathway for peace is found that includes Palestinians at the table, that long-running challenge to Israel’s future will continue to fester.”

And for this, other analysts blame the Israelis. In agreement, one Palestinian formerly resident in the Gulf thinks the UAE has read the situation well, and positioned itself wisely.

“The Emiratis are very smart; they know the Palestinian-Israeli peace process is very much a pipe dream,” said Wael Qahoush, who as a banking executive served five years as the board chairman of an evangelical church in the UAE.

“But by positioning themselves as friends of Israel, they hope to play the role of an honest broker in a future comprehensive peace.”

Perhaps as Abraham once did with Lot, and later with Abimelek.

“Christian theology promotes respect toward the ‘other,’ advocating for each community to live in dignity, with peace and justice,” said Bible Society general secretary Jebejian.

“Any initiative that can build this bridge is welcomed.”