Like many Christians switching churches, he now identifies as nondenominational
Daniel Silliman|October 27, 2020 11:00 AM 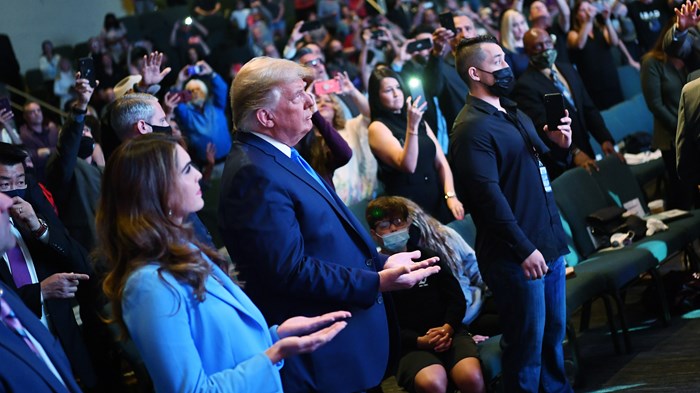 More than 180,000 people have stopped identifying with the Presbyterian Church (USA) in the past four years, according to official church numbers. Now there’s one more: President Donald Trump.

Trump told Religion News Service last week in a written interview mediated by spiritual advisor Paula White-Cain that he doesn’t consider himself to be Presbyterian. He was confirmed in the church and has called himself Presbyterian numerous times over the years. But no more.

“I now consider myself to be a non-denominational Christian,” Trump said in the statement. “Melania and I have gotten to visit some amazing churches and meet with great faith leaders from around the world. During the unprecedented COVID-19 outbreak, I tuned into several virtual church services and know that millions of Americans did the same.”

While the mainline denomination has previously challenged Trump’s affiliation, his recent departure seems to be the result of the president slowly moving away from his childhood church and toward a more evangelical faith.

Trump was not a regular churchgoer before he was elected president. He attended Norman Vincent Peale’s church for a while and praises Peale’s book The Power of Positive Thinking. He has also attended Episcopal churches for several Christmas and Easter services. In 2016, he was described by one prominent evangelical supporter as a “baby Christian.”

Since moving to the White House, however, he has visited many different churches, mostly evangelical and Pentecostal. He has met with numerous ministers, been prayed over, and sought the advice of spiritual counselors like White-Cain, a Florida televangelist often associated with the prosperity gospel, who took a position as the Trump administration’s faith outreach coordinator last year. City of Destiny, the church White-Cain founded in Florida, is nondenominational.

The Presbyterian Church (USA) has declined from 3.1 million members in 1984 to about 1.3 million today. Membership has dropped by an average of 4.5 percent every year that Trump has been president.

Changing religious identification is also common in the United States. Social scientists call this “switching.” This includes dramatic conversions, like when someone has a born-again experience, but also more subtle changes, like when someone moves to a new town and decides to try the local Baptist church instead of another Methodist congregation.

In the three-wave Cooperative Congressional Election Study—which surveyed the same individuals in 2010, 2012, and 2014—1 out of every 6 Christians changed their religious identification over four years. Some stopped identifying as Christians and either called themselves “none” or “nothing in particular.” But about 16 percent changed denomination, including about 20 percent of Presbyterians, who stopped calling themselves Presbyterian and started calling themselves something else—often “nondenominational.”

Of course, most Americans are not the president. It is highly unusual for the chief executive to change religious identification in office. The last time it happened, Trump was six years old.

Dwight Eisenhower was baptized the second Sunday he was in the White House, in January 1953. He was joining the group that Trump is now leaving: the Presbyterians.

Eisenhower, like Trump, was not particularly religious before his election. He was raised in a small Anabaptist denomination, which he left when he went to military school. His parents later joined the Bible Students, a group that became the Jehovah’s Witnesses. When he was running for office in 1952, the World War II hero’s lack of a denomination became an issue. He was called “a man without a church and without a faith.”

One of his spiritual advisors, the evangelist Billy Graham, encouraged Eisenhower to set an example for the nation by joining a church, and recommended he become a Presbyterian. Though Graham was a Baptist, he worked across denominational lines, knew the Presbyterian minister in Washington, DC, and thought Eisenhower would feel comfortable at the orderly, formal Sunday service.

Eisenhower originally resisted the idea, according to historian Gary Scott Smith, thinking the move would just look cynical and political. He felt his faith was private.

He was convinced when one of his staff asked him to think about the nation’s children, yanked out of bed every Sunday to go to church, complaining that they shouldn’t have to go if the president of the United States didn’t have to go. The president should set a good religious example.

Eisenhower made it a priority in his administration to promote belief in God and religion, in very general terms. He saw religion as a spiritual resource in the Cold War conflict with Communism. He added “under God” to the Pledge of Allegiance and promoted the National Day of Prayer. He spoke frequently about the importance of “a deeply felt religious faith”—most famously when he said, “Our form of government has no sense unless it is founded in a deeply felt religious faith, and I don’t care what it is.”

Most Americans came to see Eisenhower as a very religious president, though some critiqued him for being specific about his faith. He seemed to promote a generic American religion, which had nothing to do with Jesus or any particulars about God or any theological content. He seemed to have, one person said, “a very fervent believer in a very vague religion.”

Today, when the Cold War struggle has been replaced by culture war conflicts, critics see Trump’s move from Presbyterian to nondenominational Christian in the opposite light: It’s too specific. Instead of trying to represent all Americans with platitudes about “deeply felt faith,” they claim Trump is making a political move, identifying with the religious voters he needs at the polls.