Even with disputes over Trump and critical race theory pushing some minority leaders out, others stand by the missional advantage in the country’s largest Protestant body.
David Roach|April 7, 2021 06:00 AM
Português 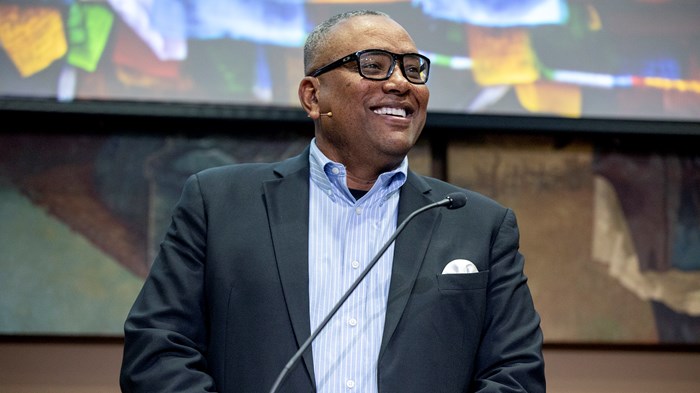 Fred Luter has been a Southern Baptist for 35 years. But the last four years “have been some of the most difficult times” to be black in the Southern Baptist Convention (SBC), he said, as white pastors appeared to support President Donald Trump uncritically despite character flaws for which they “would have crucified” President Barack Obama.

Noticing the disparity, members of the predominantly black New Orleans congregation Luter pastors told him they’re “almost embarrassed” to be Southern Baptist. They even asked to leave the SBC.

But Luter, the first African American SBC president, hasn’t wavered in his support for the convention.

Luter shared his story as part of a YouTube series titled Why I Stay, featuring testimonies from leaders of color who have remained in white evangelical circles—including the SBC—despite mounting pressure to leave. The series is hosted by Dhati Lewis, a North American Mission Board (NAMB) vice president who is among the highest-ranking black employees at any SBC entity.

“We have to be as loud as the detractors in letting people know all the positive that’s going on in the denomination” for black and brown Christians, Lewis said.

That positive message increasingly has been needed as high-profile black departures from the SBC spur Southern Baptists of color to question their own involvement in the convention. Thus far, most minority churches have stayed in the SBC. Black and brown Christians who have found a home in the convention hope to keep it that way.

The relationship between the SBC and Christians of color “is kind of like a marriage,” said Marshal Ausberry, SBC first vice president and president of the convention’s National African American Fellowship (NAAF). “In marriage, you’re going to have some rough spots along the way, but we don’t divorce one another.”

The past year has been a rough spot. Chicago’s Charlie Dates and Atlanta’s John Onwucheckwa have been among black pastors to announce their departures from the SBC, citing concerns over the denomination’s racial climate.

Texas pastor Dwight McKissic, a former trustee at Southwestern Baptist Theological Seminary and perennial presence in SBC business sessions, said his church is leaving the Southern Baptists of Texas Convention (SBTC) and may leave the SBC too if it fails to stand behind a 2019 resolution endorsing limited use of critical race theory.

Nonetheless, ethnic minorities remain a strong presence in the SBC. Non-Anglo congregations comprised 22 percent of the 51,538 total Southern Baptist congregations in 2018, the last year for which data is available. That included a record high of 3,382 majority black churches, up 90 percent from 2000. The figure also included 3,509 Hispanic congregations and 2,095 Asian congregations.

Terry Turner, a Dallas-area pastor and former SBTC president, said relationships help keep him in the SBC. The denomination’s Cooperative Program, which funds missions and ministries, is “the best way of building the kingdom,” he said, and the convention is “second to none” in missions, hunger relief, and disaster relief.

When Turner led Texas Southern Baptists, he helped launch the “Look Like Heaven” initiative to spur cross-cultural worship and cooperation. When it comes to racial tension, “I just want to be on the cutting edge of making things better,” he said.

Turner is concerned, however, that the presidents of the six SBC seminaries caused an “unnecessary disruption in race relationships” late last year when they issued a statement declaring that “any version of Critical Theory is incompatible with the Baptist Faith & Message,” the SBC’s confession of faith.

Other black Southern Baptist pastors share Turner’s concern. In Birmingham, Alabama, two years ago, SBC messengers adopted a resolution on critical race theory and intersectionality that provoked some objections from the floor and later a documentary alleging a social justice agenda in the convention. The seminary presidents issued their statement in part to address such objections.

But some African Americans have taken issue with the presidents’ complete rejection of critical race theory, wondering if they caved to pressure and subverted the will of SBC messengers. Critical race theory, while flawed as a worldview, has limited use, pastors of color say, including to help analyze unconscious bias at SBC institutions—none of which has ever hired a chief executive who isn’t white.

Ausberry has been dialoguing with the seminary presidents about non-Anglo Baptists’ concerns. The presidents did not diminish African Americans’ views intentionally, he said, and have admitted that including people of color in their deliberations about critical race theory would have been helpful. NAAF and NAMB are partnering to launch a new outreach effort to black churches, with details to be rolled out later this year.

The NAAF in March, though, said it was disappointed that the presidents had “not moved from their original statement of CRT’s incompatibility in all its forms” and reiterated that “we strongly believe that any discussions on systemic racism must consider the lived experiences of Blacks and other ethnic groups.”

Continued SBC involvement is beneficial to Christians of color, Ausberry said, because of the convention’s “high view of Scripture” and its focus on reaching the lost for Christ. He feels “a sense of God’s calling to be in the SBC.”

Among the “numerous advantages” of SBC affiliation for him are the international and North American mission opportunities as well as relationships with pastors of multiple ethnicities. But he believes the “wholehearted embracing” of Trump by some white Southern Baptists who “tried to baptize” the former president’s ideology is causing black and Latino pastors to reconsider their future SBC involvement.

“Some told me they’ve got one foot out the door,” Robinson said. “Others have told me that they are evaluating things and waiting to see, and some told me they have no intention of leaving at this time.” The “way forward is for the SBC to get back to what the Lord has called us to do. That’s to live out the Great Commission and the Great Commandment.”

All four have spoken to the issues being discussed by African Americans and other ethnic minorities. Adams leads Southern Baptists in one of America’s most culturally diverse regions. Litton has signed multiple statements on racial reconciliation in recent years and will be nominated by Luter. Mohler has drawn praise in the past for his work toward racial reconciliation, including helping to inspire the 2017 book Removing the Stain of Racism from the Southern Baptist Convention. More recently, he drew critique for endorsing Trump in 2020 after declaring himself a Never Trumper four years earlier.

Stone, a member of the Conservative Baptist Network steering committee, has expressed concern over critical race theory’s influence in the convention. But Latino pastor Javier Chavez, a candidate for SBC second vice president this year, said Stone “pressed diversity” when he was Georgia Baptist Convention president and helped bring Chavez into the state convention’s leadership.

While Chavez wants to see more Hispanics in SBC leadership, he is pleased with the SBC’s outreach to Spanish speakers. Multiple SBC entities offer Spanish-language programs and resources, he said, including a host of publications from Lifeway Christian Resources, the SBC’s publishing arm.

To overcome racial tension in the convention, “let’s open our Bibles,” said Chavez, pastor of Amistad Cristiana, a Hispanic church in Gainesville, Georgia. “Let’s sit down, let’s talk, and then let’s pray, and let’s move forward, … Let’s bring closure to this conversation.”

Last month’s Executive Committee meeting in Nashville provided a glimmer of hope such a moving forward is possible. In his presidential address, J. D. Greear suggested he has heard the concerns articulated by black and brown Southern Baptists. He addressed “our leaders of color, many of whom I know are struggling to stay engaged in a convention that you think cares little about you.”