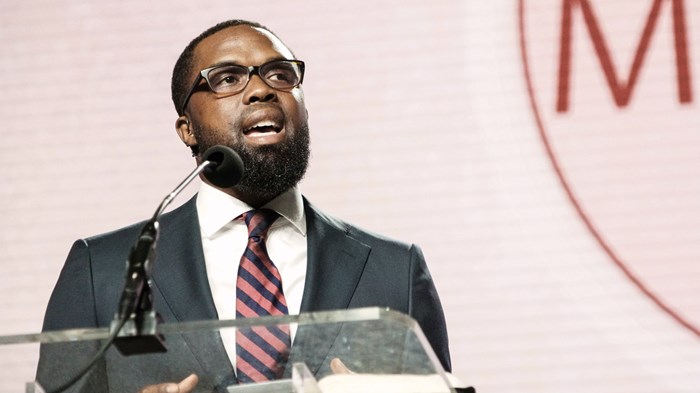 The 100-year-old church is still part of the Progressive National Baptist Convention, a mainline, African American denomination, and convincing his social justice-minded members to join the SBC was “one of the hardest lifts” of Dates’ 10-year pastorate, he said.

Dates is among several high-profile black pastors whose churches have become Southern Baptist in recent years.

Others include H. B. Charles of Shiloh Metropolitan Baptist Church in Jacksonville, Florida, in 2013, and Bartholomew Orr of Brown Missionary Baptist Church in Southaven, Mississippi, in 2015. Charles served as president of the SBC Pastors’ Conference in 2018.

Progressive began cooperating with the SBC, Dates said, for two main reasons: its relationship with Adron Robinson, a fellow black Chicago pastor who serves on the SBC Executive Committee, and its desire to work with North American Mission Board (NAMB) in establishing a residency program to help train young black pastors.

Southern Baptists have seen growth among ethnic minorities, including African Americans, while the denomination overall is in decline. But Dates understands why some black churches don’t want to partner with the SBC.

He’s troubled that no SBC entity is led by a non-Anglo. “Every time there is a selection and they say, ‘God’s man is …,’ it’s a white man,” the Chicago pastor said. Over the past two years, nearly half of the denomination’s major entities—missions bodies and seminaries—have appointed new presidents. Despite encouragement to consider diverse candidates, all five were white.

Dates is also bothered that the convention seems to have an “over-infatuation” with President Trump and the Republican Party, and that all entity heads haven’t joined SBC president J. D. Greear in declaring “black lives matter.”

Atlanta pastor John Onwuchekwa, an African American who planted a church through NAMB, voiced some of the same concerns when he announced earlier this summer that his congregation would be withdrawing from the SBC.

“I trust God that none of our labor was in vain, but I do not see the utility of our church made up predominantly of ethnic minorities remaining in the SBC,” he wrote. “Because rather than being an agent of change, I fear our presence has largely been an advertisement for other churches of similar makeup saying ‘Come in…the water’s fine.’ The sign I’d rather hold up is, ‘Enter at Your Own Risk!’”

African American churches are continuing to join the SBC, somewhere between dozens to more than a hundred a year for the past decade.

The most recent denominational numbers come from 2018, and until then, there weren’t signs of a trend of majority-black churches leaving, though the rates of growth year-over-year had slowed after shooting up in the early 2000s. The SBC experienced a 43 percent jump in majority-black churches between 1998 and 2002, compared to 11 percent over the most recent four years.

The leveling-off of black churches affiliating with the SBC may be generational, Dates said, as younger black pastors grow impatient with what they perceive as a disparity between the convention’s statements about racial justice and its actions.

“As you get more pastors under 40 assuming the reins of black churches, fewer of them are going to want to have anything to do with the Southern Baptist Convention,” he said, “because of the racial tension and the lack of courage in the present moment.”

At times, that tension has come up around SBC annual meetings. In Birmingham, Alabama, last year, messengers adopted a resolution on critical race theory and intersectionality that provoked some objections from the floor and later a documentary alleging a social justice agenda in the convention. The previous year, a convention address by Vice President Mike Pence drew criticism as mere Republican politics, and in 2017, a black pastor proposed a resolution condemning the alt-right that initially didn’t make it to the SBC floor, but was eventually approved.

Nonetheless, the SBC continues to become increasingly diverse. Both the National African American Fellowship (NAAF) of the SBC and the domestic church-planting entity, NAMB, have focused over the years on building relationships with black churches—NAMB with a designated black church relations department until 2012. The two are partnering to launch a new outreach effort to black churches, with details to be rolled out early next year.

A variety of factors have contributed to the increase of black churches over SBC history. The convention’s 1995 resolution apologizing for its racist formation and history brought an uptick in African American church affiliations, said Willie McLaurin, vice president for Great Commission relations and mobilization at the SBC Executive Committee. So did the election of Fred Luter in 2012 as the first black SBC president.

“The SBC has come a long way,” said Marshal Ausberry, SBC first vice president and president of NAAF. The convention “is doing some deep soul searching about its past, its positioning, and its long-held purpose to win souls around the world for Christ.”

When the convention was established in 1845 by pro-slavery Southerners, about 100,000 of the 350,000 Southern Baptist church members were African American, according to Baptist historian William Whitsitt’s estimate published in the 1895 SBC Annual.

Mostly slaves, they were permitted to vote on church business items and serve on church committees, Baptist historian Gregory Wills wrote in Democratic Religion. But they were forced to take the worst seats during worship, and many received incomplete biblical teaching aimed largely at securing their subservience on the plantation.

During Reconstruction, when African American Baptists began to form their own state and national conventions, the SBC experienced an exodus. Between 1880 and 1883, the SBC reported losing 766,000 of its 1.7 million church members, according to statistical tables published in the Baptist Sunday School Board’s 1992 Southern Baptist Handbook.

“I am convinced that the primary reason [for the drop] is the loss of African American members,” New Orleans Baptist Theological Seminary historian Lloyd Harsch said.

By 1900, all black churches had withdrawn from the SBC. A trickle of African American congregations began to rejoin the convention in the 1950s—initially in non-Bible Belt areas like Alaska and California. By 1981, there were 600 predominantly black Southern Baptist Churches with 220,000 members, Baptist Press reported at the time.

Over the next four decades, the number of black Southern Baptist churches grew (though African Americans represent only 6 percent of the SBC’s total church members, according to the Pew Research Center). By 2000, the number of majority black churches had jumped 196 percent to 1,778, according to data from NAMB’s Center for Missional Research. In 2018, it was up another 90 percent to 3,382. That growth has come from both black SBC church plants and existing African American churches beginning to affiliate with the SBC.

Convention statistician Scott McConnell, executive director of LifeWay Research, said those figures “give us some guidance.” But they are not a “true total” of black churches because they only include churches that indicate on their annual statistical report that the largest ethnicity in their congregation is African American. Some churches don’t report, and others don’t note their ethnicity.

Still, the SBC is “probably the most ethnically diverse religious body in America,” said Mark Croston, national director of black church ministries at LifeWay Christian Resources, echoing a claim first made in 1970 by missiologist C. Peter Wagner. “And we continue to grow in that way.”

The number of black Southern Baptist churches has increased from zero in the mid-20th century to nearly 3,400 today, accompanied by a corresponding increase of African Americans in SBC leadership.

Editor’s note: A previous version of this article referenced a claim that no SBC entity head had joined J. D. Greear in stating that “black lives matter.” Multiple Southern Baptist seminary presidents had done so in June. CT regrets the error.