The ministry’s former spokesman had appeared in national media explaining why he as a Christian trusts the COVID-19 vaccine.
Kate Shellnutt|August 27, 2021 11:24 PM 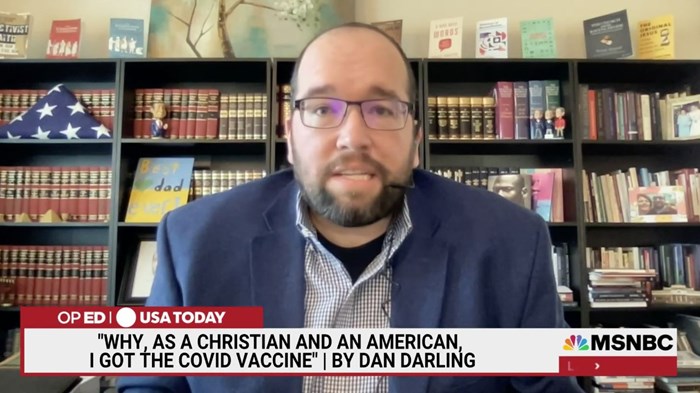 Daniel Darling, an evangelical author and the spokesman for NRB (National Religious Broadcasters), spoke out this month about his decision to get the COVID-19 vaccine in an op-ed in USA Today and a segment on MSNBC.

As of Friday, his remarks cost him his job with the ministry.

Darling was fired from NRB this week when he refused to sign a statement saying his pro-vaccine messaging amounted to insubordination, a source told CT on his behalf.

In a statement, Darling said he was “sad and disappointed that [his] time at NRB has come to a close.”

NRB, which calls itself the largest association of Christian communicators, has more than 1,100 members working in Christian radio, TV, and other media. Part of the group’s purpose, it says, is to advocate for the “free speech rights of our members.”

In the aftermath of Darling’s firing, some evangelicals raised concerns that NRB was defying its own stances around free speech and anti-censorship, or that it was aligning with conservative radio pundits at the expense of a leader like Darling.

NRB CEO Troy Miller confirmed Darling’s departure in an email to Religion News Service, which first reported the story, but he did not elaborate on whether his vaccine remarks were the reason. “Dan is an excellent communicator and a great friend,” Miller said. “I wish him God’s best in all his future endeavors.”

The following day, Miller shared a longer response on Twitter saying, “No NRB employee has ever been fired for their views on this subject.” He said that he had issued a directive as CEO advising staff that “this is not an issue that NRB is called to advocate for one way or another” and “from here out NRB stays neutral.” According to a source familiar with the situation, Darling had not previously been asked to seek approval for media appearances.

Back in the spring, the NRB CEO had called the vaccines “stunningly effective” in an email urging members to attend its convention last June.

This summer, the spread of the delta variant has officials and community leaders once again urging vaccination. White evangelicals have become less hesitant toward the COVID-19 vaccine than they were in the spring, but in recent surveys, they still lag behind Americans overall.

Darling described how the vaccine has been shown to save lives and how he didn’t want to see anyone else die unnecessarily from the coronavirus. He lamented how a growing lack of trust in institutions played a factor in the current divides over the vaccine.

“There are not many things in the world today that are worthy of our trust, but I sincerely believe the COVID-19 vaccine is one of them,” Darling wrote in an August 1 op-ed in USA Today. “As a Christian and an American, I was proud to get it.”

He discussed the piece on Morning Joe, similarly telling host Joe Scarborough, “When we get a vaccine we not only protect ourselves, but we are also doing our part to keep from spreading the virus and hurting our neighbors.”

The source speaking for Darling said that he was fired without severance. Friends, fellow evangelicals, and fellow Southern Baptists on Twitter defended Darling and criticized the move.

Russell Moore, CT public theologian and Darling’s former colleague at the ERLC, called the decision “insanity” and “inexcusable.” Nathan Finn, provost at North Greenville University, said, “People are going to come out of the woodwork in his defense—and rightly so.”

In Darling’s statement, he referenced Jesus’ prayer in John 17 and his desire that believers would unify and “be one” around the truth of the gospel.

“I’m grieved that the issues that divide our country are also dividing Christians,” he said. “My desire is to build bridges and bring Christians together around our common mission of loving Jesus and loving our neighbor, but sadly we are sometimes tempted by the same things that tempt the world.”