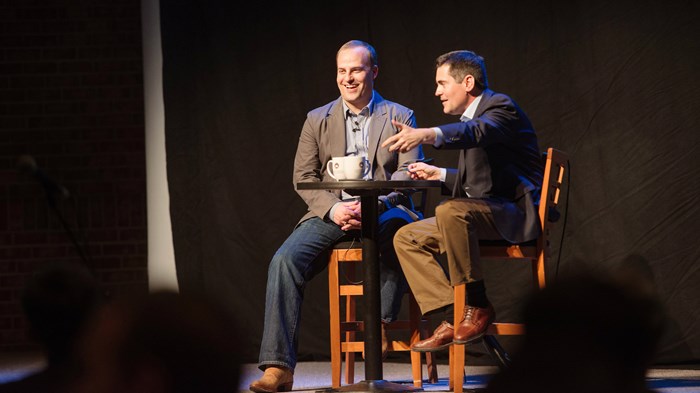 Three top leaders who served alongside Russell Moore at the Ethics & Religious Liberty Commission (ERLC) since the start of his presidency have left the Southern Baptist entity over the past six months.

The ERLC said in a news release that its mission continues uninterrupted, the staff changes providing an opportunity “to strengthen the work of the organization.”

Bethancourt—who stepped down from his position as executive vice president on April 26 to become pastor of Central Church in College Station, Texas—cited the trio’s work as evidence of “a generational shift on how Southern Baptists engage the public square.”

Days before Bethancourt’s departure, Darling, the ERLC vice president for communications, announced he too would be leaving, taking on a position as senior vice president for communications at the National Religious Broadcasters. Walker, former director of research and senior fellow in Christian ethics, departed October 31 to become a full-time ethics professor at the Southern Baptist Theological Seminary.

To fill their roles, the ERLC named former vice president for operations and chief of staff Daniel Patterson as the new executive vice president and spread Walker’s responsibilities among other staff. Darling’s replacement has not been announced.

The ERLC said the moves are unrelated to the scrutiny it has faced from some quarters of the nation’s largest Protestant denomination, including a newly formed Conservative Baptist Network. In February, an SBC Executive Committee task force was appointed to study “past and present activities” of the ERLC in light of “ongoing concerns” over its political positions.

The ERLC’s board of trustees opposed the move as “unwarranted, divisive, and disrespectful,” suggesting it raised undue suspicion toward the ERLC under Moore. The Executive Committee responded and said, “This is not an attempt to remove Dr. Moore or to direct his staff.”

Since becoming president in 2013, Moore has ushered in a new era at the ERLC. When his predecessor Richard Land took office in 1988, most of Moore’s staff—including those three early appointees—weren’t even out of elementary school.

Bethancourt was Moore’s top lieutenant, coordinating the staff and playing a central role in ERLC events, including a 2018 conference commemorating the 50th anniversary of Martin Luther King Jr.’s assassination, which drew 5,000 attendees and half a million views online, and a 2015 conference on the gospel and politics, held less than two months after the US Supreme Court legalized same-sex marriage.

Over the past two years, Bethancourt led the ERLC’s campaign against sexual abuse. He made a motion at the 2018 SBC annual meeting requesting a task force for helping churches protect themselves against sexual predators. When SBC president J. D. Greear formed an abuse study group in conjunction with the ERLC, Bethancourt took the lead in working with survivors and experts, who advised the SBC leading up to a bylaw change regarding abuse in 2019.

“My big priority was to put our team in a position to thrive to carry out the mission and the vision of the organization,” said Bethancourt, who spoke to CT earlier about transitioning to a new pastor role during the pandemic.

Darling oversaw a shift in the media the ERLC used to communicate its message. Before his arrival, a print magazine and radio program were anchors of the commission’s communications strategy. Today—with the magazine reimagined and the radio program gone—the ERLC produces podcasts, has a redesigned website, and is nearing 40,000 Twitter followers.

While Land was known as a reliable supporter of Republican politicians, Moore and his administration were vocal critics of both Hillary Clinton and Donald Trump during the 2016 presidential campaign. At times, political stances from Moore’s ERLC made waves among Southern Baptists. In 2017, the SBC Executive Committee formed an ad hoc committee to study reports that churches were withholding funds from the denomination’s Cooperative Program, in part over the ERLC’s perceived criticism of Trump supporters. Eventually, the committee reported little to no impact: Less than .0016 percent of Southern Baptist churches had withheld funds.

The Executive Committee is once again considering “ongoing concerns” related to the ERLC, with a report expected in September. Among the commission’s critics over the past year have been the Calvinist group Founders Ministries, which took issue with the ERLC’s alleged advocacy of critical race theory, and the newly launched Conservative Baptist Network, which told CT in March the network has “heard from numerous churches across our nation and Southern Baptist family who have serious concerns with some the ERLC’s positions.”

Meanwhile, the ERLC says staff changes are part of the life cycle of any healthy organization and reflect God’s ongoing work in the lives of its staff—not a response to external pressures.

The new roles assumed by departing staff “are perfect fits for the way God has equipped us,” Bethancourt said. “One of the awesome things about the ERLC is that we’ve always seen ourselves as an equipping and sending organization that wants to raise up leaders, multiply them, and send them out.”

Over the next two years, the ERLC plans to use its retooled staff to continue emphases on protecting religious liberty and combatting sexual abuse while also promoting “unity among the body of Christ” during the presidential election cycle and addressing new frontiers in technology like artificial intelligence, according to the ERLC’s 2020 Cooperative Program Ministry Report to the Executive Committee.

“The mission doesn’t really change” when staff members change, Patterson told Christianity Today. “The mission has always been being a people focused on the gospel and speaking to our churches and from our churches into the public square.”

In that vein, the rising class of ERLC leaders will have to navigate the latest cultural challenges. Wussow, for instance, will shepherd the anti-sexual-abuse campaign to the end of Greear’s SBC presidential term—extended a year because of the cancellation of this year’s SBC annual meeting over COVID-19.

Creative director Jason Thacker was named the ERLC chair of research in technology following publication of his book The Age of AI. Elizabeth Graham will shepherd pro-life initiatives leading up to the 50th anniversary of the Supreme Court’s Roe v. Wade decision in 2023.

Moore said in the ERLC release, “What was needed was a shifting of additional responsibilities, not the hiring of new people, which turns out to be an additional blessing in this time of our country’s great economic distress.”