Prayers, Bible verses, and reference to the ‘City of God’ set the stage for the inauguration of a Catholic president.
Kate Shellnutt|January 20, 2021 01:29 PM 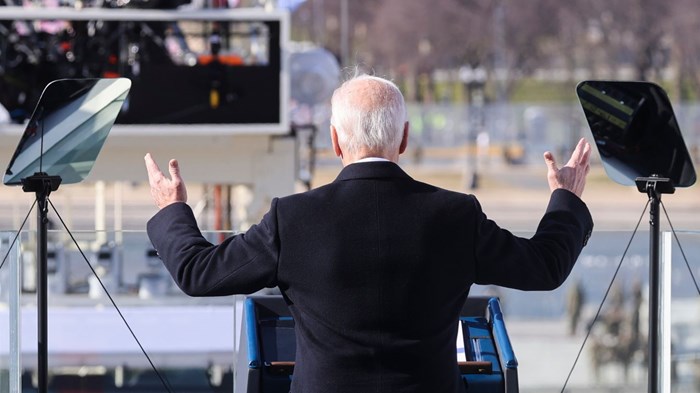 In his inaugural address calling for national unity, President Joe Biden turned to Christian teachings, including the Psalms and Saint Augustine, to acknowledge the pain of the current political moment and his desire to bring Americans together around common values.

Despite the adjustments made to this year’s ceremony, the event offered the typical display of American civil religion—prayers and appeals to national aspirations—with nods to Biden’s Catholic faith throughout.

In his first remarks as president, Biden continued to use the “soul” language that was the mantra of his campaign, saying, “My whole soul is in this, bringing America together, uniting our people, uniting our nation, and I ask every American to join me in this cause.” He acknowledged that, “speaking of unity can sound to some like a foolish fantasy these days. I know the forces that divide us are deep and they are real,” but told Americans that “history, faith, and reason show the way of unity.”

Michael Wear, founder of Public Square Strategies LLC and a previous White House staffer, called the inaugural address “a soulful appeal for a substantive unity” and the best speech of Biden’s life.

“It drew on the deepest sources of meaning Biden could draw on, including faith,” said Wear, who served under President Obama. “Biden was honest in the speech, acknowledging that unity would not be found in agreement on every policy proposal, but in shared purpose and affection.”

As Biden listed America’s common values, like opportunity, security, liberty, dignity, respect, honor, and the truth, he quoted a teaching from Augustine—“a saint of my church”—that “a people are a multitude defined by the common objects of their love.”

The church father shared this view in City of God, where he presented love, not law, as the thing that binds a society together. He taught that “the soul takes on the character of what it loves,” writing, “to see what a people is like, we should look at what they love.”

“It’s apropos for him to use this quote because Augustine’s talking about people as a nation,” said Han-luen Kantzer Komline, an Augustine scholar at Western Theological Seminary. “It’s also kind of a brilliant move to invoke Augustine. Biden is a Catholic, and Augustine is probably the most important theologian for Catholics apart from the apostle Paul himself, but he’s also really important for Protestants.”

But she points out that Augustine also taught that an appeal to common loves, even good ones, is not enough to foster a virtuous society; that requires love of God above all else.

James K. A. Smith, whose book You Are What You Love is based on Augustine’s teaching, also celebrated Biden’s reference.

In his address, President Biden went on to quote Psalm 30:5, “Weeping may endure for a night, but joy cometh in the morning.”

“What’s remarkable is not that he quoted the psalms. Plenty of presidents have quoted the psalms in their inaugural speeches, from Woodrow Wilson to Barack Obama. What’s remarkable is how doubly apt his choice was,” said W. David O. Taylor, author of Open and Unafraid: The Psalms as a Guide to Life. “It not only accurately describes the desire of so many Americans, namely that this time of trial come to a certain and swift end; it also aptly describes the story of the psalmist who goes into trouble and comes out of trouble.”

Taylor, a Fuller Theological Seminary professor, noted that Psalm 30 is haunted with death imagery before inviting the community to praise God and expect him to turn their “mourning into dancing.”

“At the moment, for us as Americans, this is aspirational language. We’re not there yet. But Biden sounds the right note by giving voice to the yearning of every human heart, not just during these trying and troubling times, but at every time and in every place where God has rescued us from death into life,” he said.

Biden repeatedly brought up the strain of the COVID-19 pandemic, including asking Americans to join him in a moment of “silent prayer” to remember the lives lost.

The ceremony also included prayers from two members of the clergy: Jesuit priest Leo O’Donovan and African Methodist Episcopal preacher Silvester Beaman—a smaller lineup than the six clergy that spoke at Trump’s 2016 inauguration. It was the first inauguration ceremony in nearly fifty years to not include a white Protestant leader. (Biden’s cabinet nominees are mainly Catholics, Jews, and nonwhite Christians; Pete Buttigieg, an Episcopalian, is the only white Protestant among them.)

O’Donovan, former president of Georgetown University in DC, quoted 1 Kings 3:9 and James 1:5 as he prayed. “For our new president, we beg of you the wisdom Solomon sought when he knelt before you and prayed ‘for an understanding heart so I can govern the people and know the difference between right and wrong,” he said. “We trust in the counsel of the letter of James ‘If any of you lacks wisdom, you should ask God, who gives generously to all without finding fault, and it will be given to you.’”

In a benediction that referenced the place of slaves, indigenous Americans, and immigrants in the US, Beaman charged the country to work against sin and brokenness. “We will make friends of enemies. Your people shall no longer raise up weapons against one another,” he said. “We will lie down in peace, not make our neighbors afraid. In you, O God, we discover our humanity.”

Viewers also celebrated the Christian references offered by the young African American poet laureate who read a composition called, “The Hill We Climb,” written in the wake of this month’s Capitol attack.

“I am no fan of civil religion, but I appreciate that Biden’s faith informs his work and that Scripture motivates him, as it also inspired the words of the poet laureate, Amanda Gorman,” remarked Dennis Edwards, New Testament professor at North Park Theological Seminary.

“The line that stood out the most for me was ‘If we merge mercy with might and might with right, then love becomes our legacy and change our children’s birthright.’ We need both. Mercy without might is weak; might without mercy is abusive. According to Micah 6:8, we need both plus humility to what is good in the eyes of the Lord,” she said.

“Politics is not everything, but it does present an opportunity to right wrongs, to love our neighbor, and bring flourishing for all God's children. Amanda's poem was a beautiful reminder of the best of our American ideals and the hope of an America as good as its promise.”