Between 2016 and 2020, younger white evangelicals started to shift away from pro-life positions while older ones solidified their stances.
Ryan P. Burge|January 21, 2022 06:00 AM 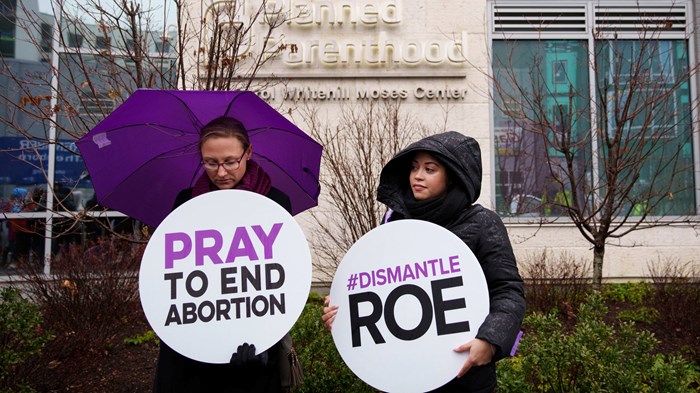 Abortion holds a unique place in the realm of American public opinion.

While views on issues like same-sex marriage and marijuana legalization have shifted dramatically over the last ten years, people tend to hold on to their positions on abortion. In my upcoming book, 20 Myths about Religion and Politics in America, I spend a chapter explaining how abortion opinion is basically unchanged over the last four decades.

Evangelicals have been the religious group with the strongest views against abortion, and across generations, they’ve held to their pro-life stances. As recently as 2016, the age gap between younger and older generations on the issue was small and substantially insignificant.

But data from 2020 has begun to show a different trend. Younger white evangelicals have become more permissive of abortion, while older ones have moved in the opposite direction.

When survey participants were asked about abortion rights—whether women should always be allowed to obtain an abortion as a matter of choice—overall support was predictably low in 2016. Just a third of those 35 and younger were in favor. In older groups, fewer and fewer evangelicals were in support. Among white evangelicals of retirement age, less than a quarter were in favor. There was about a 10-percentage-point gap between the youngest and oldest evangelicals on the issue of abortion. 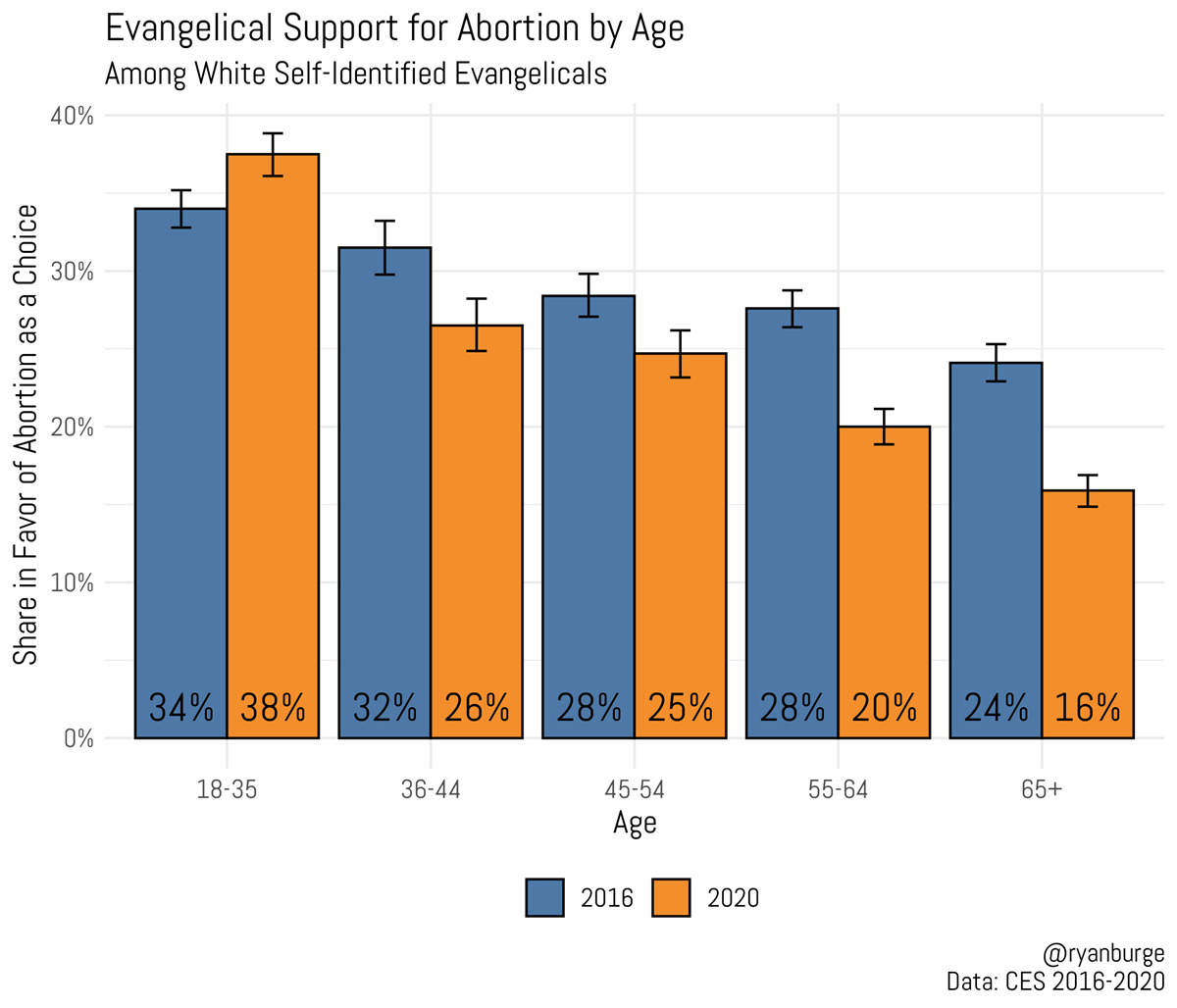 By 2020, support for abortion rights dropped among every age group but the very youngest.

Thirty-eight percent of them said that they favored abortion on demand—a four-point increase in four years. But among older evangelicals, support dropped significantly. In 2020, just 16 percent of the oldest white evangelicals were in favor, a drop of eight points in just four years. The age gap doubled in the four-year span, now up to 22 percentage points.

This age gap is persistent across a number of questions about abortion.

Respondents were asked if they favored allowing private employers to decline coverage for abortion in their insurance. Support for the policy has been robust among white evangelicals both in 2016 and 2020, never dropping below 60 percent among any age group.

However, the age gap has also grown. In 2016, there was almost no variation to this question based on age. Evangelicals born in the 1950s became even more supportive of the policy in 2020, a jump of nearly 10 points, while support from younger evangelicals dropped nearly as much. In 2016, about 73 percent of white evangelicals born in 1990 were in favor—it was 64 percent by 2020. 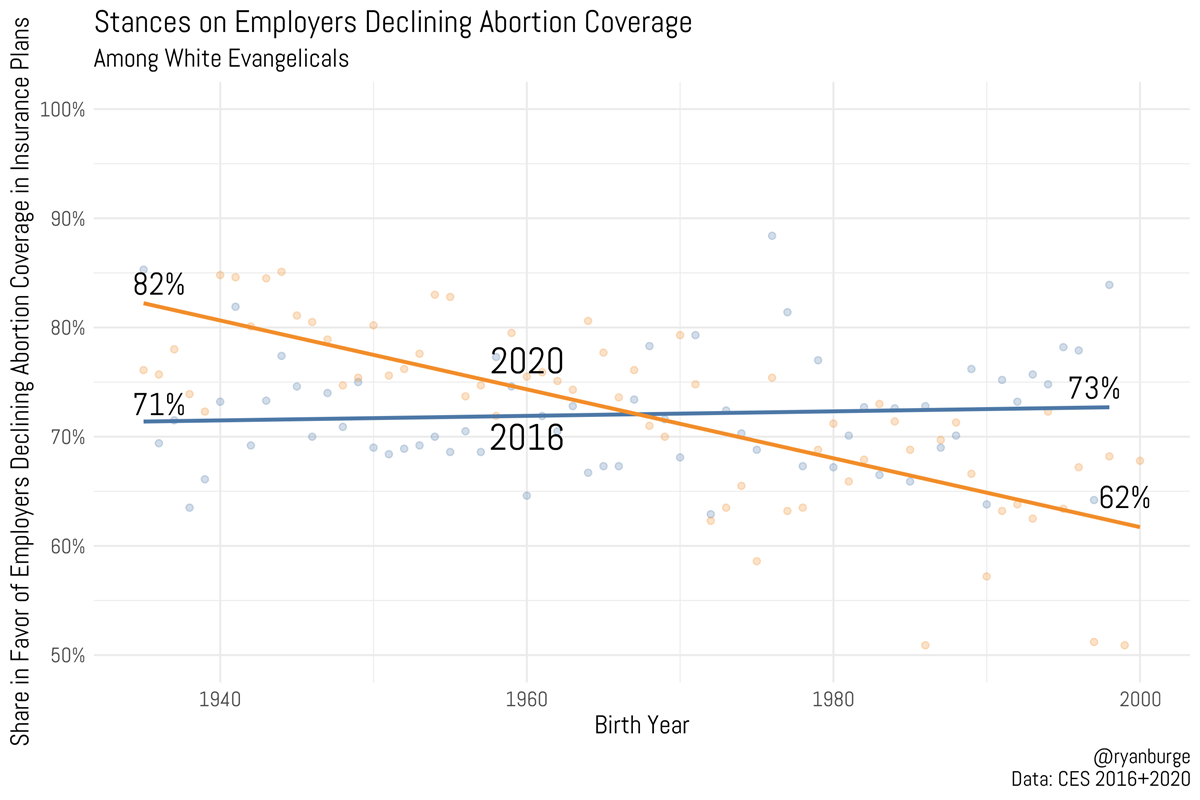 When respondents were asked about late-term abortions, the age gap persisted. In 2016, between 80 percent and 85 percent of older white evangelicals supported a ban on abortion after 20 weeks of gestation. Just four years later, support for a ban increased by about five percentage points. 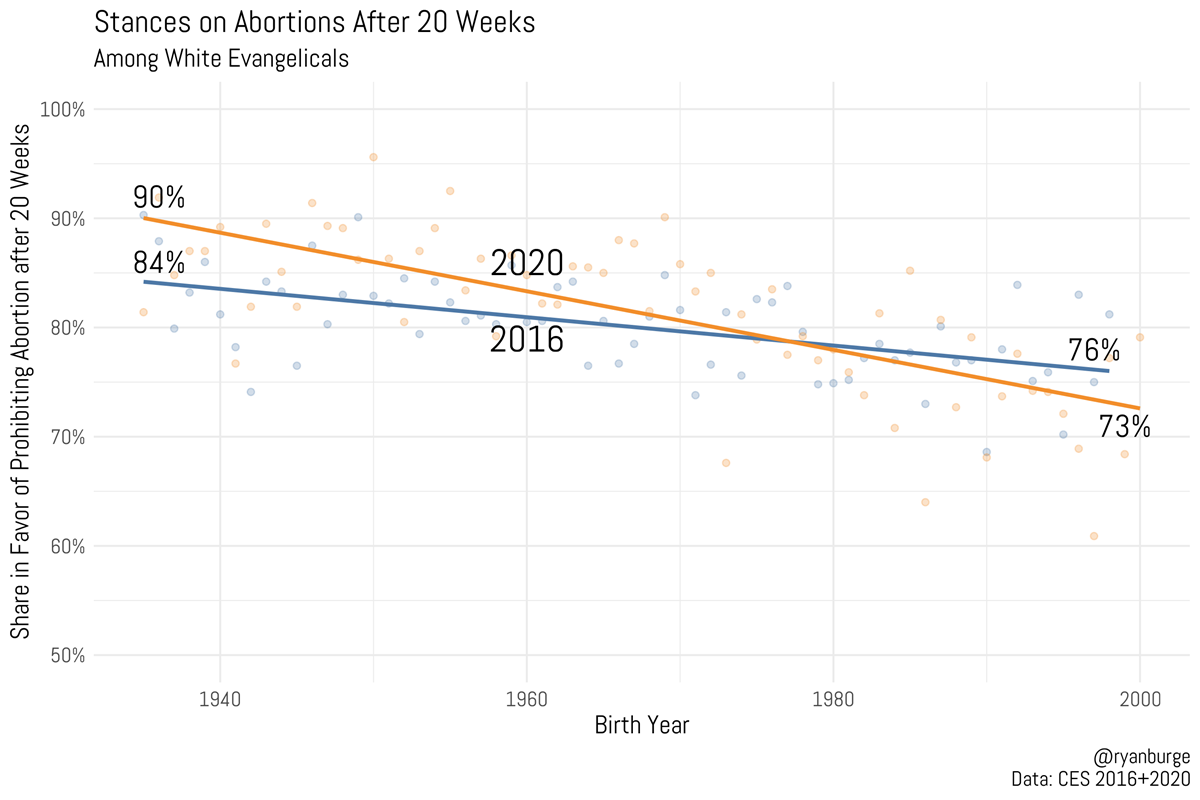 It’s not possible to say that white evangelicals actually changed their minds on abortion because the same people were not surveyed in both waves of the research. Instead, we can see that older people who identified as evangelicals were more anti-abortion in 2020 than they were in 2016, while younger white evangelicals became more in favor of abortion rights.

Why did we see so much change in just the four years between 2016 and 2020? There aren’t easy answers in the data. Younger white evangelicals, in many ways, are just as committed to Republican politics as older ones.

One potential explanation is that abortion has become less stigmatized and more openly discussed, and that can have tremendous impacts on public opinion. It’s plausible that some younger evangelicals were persuaded to moderate their stance on abortion because they had a more personal connection to the issue.

Abortion may not be as central a cause for young people overall. A 2021 New York Times article noted that “some, raised in a post-Roe world, do not feel the same urgency toward abortion as they do for other social justice causes.”

For years, pro-life evangelicals were the exception. Pro-choice advocates had worried about the “intensity gap” among young people, Slate reported, with a NARAL survey finding that pro-choice voters under 30 were half as likely as their pro-life counterparts to consider the issue of abortion “very important” in the 2016 election.

Perhaps the shifts we see among young evangelicals, and the burgeoning wave of Gen Z adults, show this distinction beginning to fade.

In a year when many evangelicals are anticipating a major milestone in the pro-life movement—the chance that the Supreme Court will overturn Roe v. Wade—it looks as if fewer young believers will celebrating alongside them.

Ryan Burge is an assistant professor of political science at Eastern Illinois University. His research appears on the site Religion in Public, and he tweets at @ryanburge.