The conservative-majority Supreme Court appeared willing to side with Mississippi’s abortion ban, which restricts beyond what “Roe v. Wade” allows.
Kate Shellnutt|December 1, 2021 04:00 PM 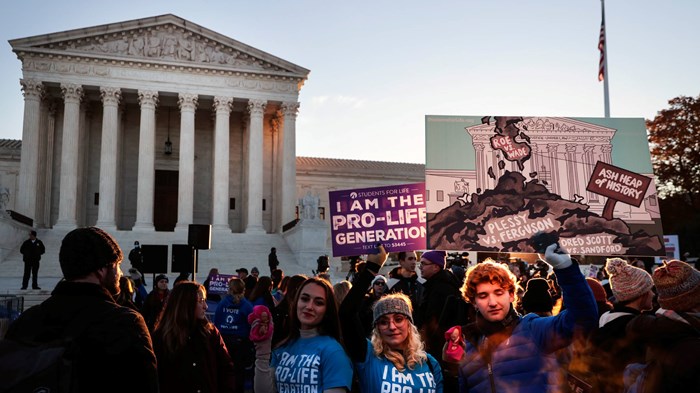 After a long-awaited challenge to Roe v. Wade made it to the US Supreme Court on Wednesday, pro-life evangelicals who had rallied for the cause for decades were encouraged that the conservative-leaning court appeared willing to uphold a contentious Mississippi law that bans abortion after 15 weeks.

White evangelicals—who are twice as likely than the average American to want to make abortion illegal—gathered outside the high court in Washington and, across the country, listened to the oral arguments streamed online due to the pandemic.

But the two-hour discussion—the greatest threat to abortion policy in 50 years of prayer and advocacy—largely skipped over familiar evangelical talking points to focus on the legal grounds for the case.

“Personhood” came up twice in the oral arguments; “mother” and “motherhood” just three times. But “stare decisis,” a legal term meaning the court would stand by historic precedent, got nearly 50 mentions.

“The discussion was purely legal—purely legal in a way that might have surprised some,” said Notre Dame law professor Sherif Girgis in a discussion convened by the Ethics and Public Policy Center (EPPC). “It was really just focused on: Is there a doctrinal path to a middle ground?”

The middle ground Gergis references is whether the court can somehow uphold the Mississippi law banning abortion at 15 weeks of pregnancy without overturning Roe v. Wade. The 1973 decision doesn’t allow states to ban abortion prior to the point the baby is viable outside the womb, around 24 weeks.

Roberts, though, couldn’t settle on what legal marker the court could adopt to move restrictions earlier than the viability standard, which legal counsel for the providers argued balanced protections for the mother and baby.

Russell Moore, who leads CT’s public theology project, wrote that, “The Court was wrong to grant human rights on the basis of viability or unviability. And we are wrong when we do the same, despising weakness and idolizing power.”

Justice Kavanaugh brought up that the Constitution is “silent” and “neutral” on abortion. He seemed to suggest that national abortion regulations shouldn’t be up to the Supreme Court.

“Why should this Court be the arbiter rather than Congress, the state legislatures, state supreme courts, the people being able to resolve this?” he asked.

Pro-life advocates and legal experts say they were heartened by what they heard in the oral arguments . Roger Severino, the former director of the Health and Human Services Office for Civil Rights under Trump, said the pro-life movement should “rejoice” at the outcome.

Evangelicals were not directly mentioned in the arguments in the chamber, but Justice Sonya Sotomayor evoked evangelical convictions as she referenced the role of faith in beliefs around when life begins.

“How is your interest anything but a religious view?” she asked Mississippi Solicitor General Scott Stewart, who argued on behalf the state’s ban.

“The issue of when life begins has been hotly debated by philosophers since the beginning of time. It’s still debated in religions,” she said. “So when you say [the right to abortion] is the only right that takes away from the state the ability to protect a life—that’s a religious view, isn’t it? Because it assumes that a fetus is life?”

Evangelical Protestants make up 41 percent of the population in Mississippi (compared to a quarter of the US overall), and the state has one of the highest levels of abortion opposition in the country, with 59 percent saying abortion should be legal in all or most cases.

US Solicitor General Elizabeth Prelogar, who sided with the clinics, argued that women depend on abortion as a “fundamental right” that’s “central to their participate fully and equally in society.”

“For a half century, this Court has correctly recognized that the Constitution protects a woman's fundamental right to decide whether to end a pregnancy before viability,” she said.

Barrett brought up adoption as an alternative to abortion and questioned the argument that women rely on abortion for their standing in society.

The momentum around reversing Roe v. Wade has also drawn more attention to the evolving future of the evangelical pro-life cause, particularly the support and care of a swath of new mothers would require if unable to obtain abortions.

Nathan A. Finn, dean and provost at North Greenville University, wrote for the Baptist Press:

The overturning of Roe must energize local pro-life activism rather than leading to grassroots complacency because of the national legal victory. In a post-Roe world, some women will still want an abortion or believe abortion is their only option. There will still be the need for pro-life pregnancy resource centers in local communities.

In states where elective abortion remains legal, those centers will continue to go head-to-head with abortion clinics. There will also still be young children in need of adoption, perhaps in some places more than there are at present. The church must remain committed to the ministry of orphan care, ready to care for little ones who need a loving home.