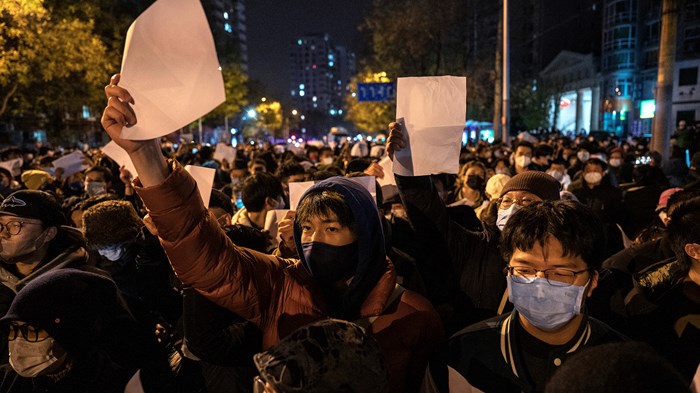 During the unexpected protests in China last weekend, a student approached Zhu Jianshe with concerns that a classmate who had posted a protest slogan on campus would be severely punished. Zhu, a professor at a university in Shanghai and a church elder, comforted her and vowed to do his best to protect the student.

“I have been preparing in my mind for the past two days that I may have to sacrifice something to protect the students if the situation calls for it,” said Zhu. (CT has changed all the names in this article for the individuals’ security)

As demonstrations in several cities around the country have made international news, Zhu has been thinking through how Christians can engage with the current moment. One area where he knows he can help: using his position to help those unable to speak for themselves.

It’s a question Christians in China are now grappling with as the country has experienced the largest protests in 33 years since Tiananmen Square. While typically the Chinese government quashes any nascent movement, a deadly fire in an Urumqi apartment building led to a national outpouring of frustration over China’s “zero COVID” policy. In major cities like Shanghai, Beijing, and Chengdu, hundreds of people took to the streets. At times, calls expanded to freedom of speech and even an end to Chinese leader Xi Jinping’s rule.

Christians in Chinese house churches have long faced government persecution but historically tended to stay away from politics, focusing on shepherding believers and evangelism. Yet especially among the urban house churches influenced by Reformed theology, this attitude is changing.

This past weekend, members of a banned house church in Chengdu held up paper signs scrawled with Bible verses: “The Truth shall set you free” and “Act justly, love mercy, walk humbly with the Lord.” Over in Shanghai, a young woman stood under the Urumqi Road sign—which was later removed by the government—and read her Bible aloud to passersby.

In CT’s interviews with seven Chinese leaders–most of whom are in their 40s and 50s and from a Reformed background–some said they believe Christians need to stay focused on the Great Commission. Others see the need for pastors to bring up current events in their churches. Most see differences between how they approach the topic from the pulpit and how they approach it in individual discipleship.

Two areas all these Chinese Christians agreed on were the importance of prayer for the country, the government, and its people and the urgency of evangelism in a time of crisis.

Christians in the midst of protests

This isn’t the first time Chinese Christians have demonstrated, although it’s a rare occurrence. In 2015, Christians in Wenzhou protested the demolition of crosses from atop their churches by blocking bulldozers, staging sit-ins, or protesting outside government offices. Chengdu’s Early Rain Covenant Church formerly led by Pastor Wang Yi has held small demonstrations denouncing abortion as well as remembering the Tiananmen Square Massacre. After the government passed new religious regulations in 2018, Wang published a statement, signed by nearly 450 church leaders, criticizing the church persecution. Wang was later arrested and sentenced to nine years in prison.

Ruth Lu, a Christian multimedia creator, believes that for Christians to be a light in the world, their faith cannot remain restricted to the church building. The current frustrations about COVID-19 restrictions, lack of freedoms, and lack of trust in government are issues that touch on all aspects of Chinese people’s lives and are impossible to ignore in church sermons and prayers.

“To be influential in the world, we should be actively involved in public affairs,” said Lu, who returned to China a few years ago after completing graduate study overseas. “When we see our neighbors being treated unjustly or suffering, Christians should actively speak up for them.”

Yet pastors often feel the need to remain more conservative in their approach.

In Chengdu, chants of “Freedom of press, freedom of expression,” rang out during a candlelight vigil for the Urumqi fire victims Saturday night. Earlier that day, Fu Jie, an elder of a house church in the city, said that a young man in his church posted in the church's social media group information about the event and called congregants to join him.

As the group administrator, Fu quickly deleted the post and told the young man that while the church wouldn’t stop members from participating, it wasn’t the church’s role to promote political actions. But the congregant could ask the church to pray for him.

That night, several of Fu’s congregants participated in the vigil by praying, singing, and preaching the gospel to those around them. Fu and others in the church prayed for their protection and made preparations in case they were arrested and needed church members to help them and their families.

“Christians in the protesting crowd should take the gospel as their starting point and try to be ambassadors of peace instead of only venting their emotions and anger,” Fu said.

In Shanghai, house church pastor Han Dawei said some of his parishioners also joined the Urumqi Road protests on Saturday. The next day, as they were sending out members of the church to plant a new church during their worship service, they looked out the window to see about 100 police cars parked along the road, evidence of government efforts to prevent more protests.

Preaching in an age of turmoil

Han said he struggles with how to discuss the current turmoil from the pulpit, as many of the congregants in his church expect him to address it. His 300 congregants are of diverse ages and differing educational backgrounds, and they get their news from different sources.

“Being a pastor requires wisdom from God, familiarity with one’s flock, and the understanding that one does not need to teach all the things one knows well on all occasions,” Han said.

He believes that his preaching should focus on the gospel of Jesus Christ, but in private pastoral counsel, he needs to let his congregants know he is “concerned about the political standing of the congregation and that the gospel will give us a fresh perspective on political events.”

Chengdu house church leader Wang Mali is concerned that if pastors share protest videos on social media or speak about politics from the pulpit, people could accuse them of using religion to subvert the Chinese regime. This would give the government an excuse to incriminate them with a political crime and prevent them from their primary goal of sharing the gospel. She compared Chinese house churches’ situation to that of the early church.

“Jesus told his disciples to carry out the Great Commission,” Wang said. “He did not command them to preach that Christians should have freedom of movement and body and the right to preach without restriction.” Rather, Wang believes pastors should pray for the gospel to spread in China and “trust God to care and reign in all things in the midst of all the turmoil.”

Zhang Yading, a US-based pastor from China who has trained and counseled many house church pastors over the past 10 years, believes the church needs to care both about people’s afterlife and for their “spiritual, political, and physical needs.”

Zhang doesn’t think the church should avoid politics, but it needs to be careful about its testimony. His concern is that Chinese Christians would get so caught up in being involved in political activities and shouting slogans that they lose their Christian witness.

He points to how the early church overcame 300 years of Roman culture by two means: “the proclamation of truth and the testimony of virtues.”

Similarly, China has a long history that includes a thousand years of imperial rule as well as the upheaval in the last two centuries from Western forces, world wars, and Communist rule. He doesn’t think many of China’s deep-rooted problems will be resolved in his lifetime.

“This means that we need to learn the virtue of patience—not seeking quick redress for our own grievances, but learning to live the life of Christ…and looking after our neighbors,” he said.

For Lu, the multimedia creator, this is a personal call. She said that strict COVID-19 restrictions in China have left her college-aged friends in despair: Their world has been thrown into perpetual uncertainty as the youth unemployment rate rises and life is constantly put on hold during lockdowns. She said they are asking where they can find hope in this bleak world. They feel that some of the police and COVID-19 prevention workers have become a tool for a corrupt system, where their only function is to perform tasks, not to do good.

She echoed other pastors who stressed the role Christians can play in pointing to true lasting hope.

“But how to restore one’s compassion, empathy, and goodness?” Lu asks. “I hope more Chinese people will realize that only the gospel can redeem people. The political system cannot redeem people from such alienation.”