When changes are introduced, some churches react like angry Henry Ford in Robert Lacy's bestselling biography Ford: The Man and the Machine. Lacy describes a man who loved his Model T so much that he didn't want to change a bolt on it.

Ford even kicked out William Knudsen, his ace production man, because Knudsen thought he saw the sun setting on the Model T. That occurred in 1912, when the Model T was only 4 years old and at the crest of its popularity. Ford had just returned from a European jaunt, and he went into a Highland Park, Michigan, garage and saw the new design created by Knudsen.

On-the-scene mechanics recorded how Ford went momentarily berserk. He spied the gleaming red lacquer sheen on a new, low-slung version of the Model T. That he considered a monstrous perversion of his beloved Model T design.

"Ford had his hands in his pockets, and he walked around that car three or four times," recounted one eyewitness. "It was a four-door job, and the top was down. Finally, he got to the ... 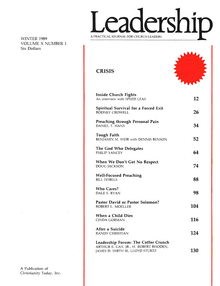 This article is from the Winter  1989 print issue of Leadership Journal. Subscribe to continue reading.