Winston Churchill was not only an inspirational leader against the terror of Nazi Germany, but he was also a humorist.

Adolf Hitler had announced at a Nazi rally during the Battle of Britain that Germany would wring England's neck like a helpless chicken.

Churchill spoke the next day in Parliament and said that Herr Hitler was in for a big surprise because he would find out that England is "some chicken with some neck."

We all know what happened, so we know what a good joke Churchill told, and we now realize that Churchill's words, his cigar, his hat, and his proper London suit were humorous jabs at terrible fears, humor that a nation under siege really needed.

As Churchill demonstrated, leaders need to rise above their circumstances, and the spiritual health required is what Christians call joy.

Search for the Source

What is the source of the joy that sets us free from fear, that creates solidarity, and that clears our vision?

That source is the one who not only created human beings but ...

END_OF_DOCUMENT_TOKEN_TO_BE_REPLACED
Already a subscriber? Log in
Read These Next 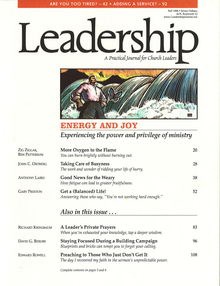 This article is from the Fall  1998 print issue of Leadership Journal. Subscribe to continue reading.