Imagine the mystery and delight of not just hearing, but seeing the story of Jesus for the first time, almost as an eyewitness.

That's what happened to a primitive tribe in the jungles of East Asia, when missionaries showed them the Jesus film. Not only had these people never heard of Jesus, they had never seen a motion picture. Then, all at once, on one unforgettable evening, they saw it all—the gospel in their own language, visible and real.

Imagine again how it felt to see this good man Jesus, who healed the sick and was adored by children, held without trial and beaten by jeering soldiers. As they watched this, the people came unglued. They stood up and began to shout at the cruel men on the screen, demanding that this outrage stop.

When nothing happened, they attacked the missionary running the projector. Perhaps he was responsible for this injustice! He was forced to stop the film and explain that the story wasn't over yet, that there was more. So they settled back onto the ground, ...

Discipleship
Spawning Grounds
Ministry leaders are called to sacrifice for the next generation.
Joel Mayward
Trending 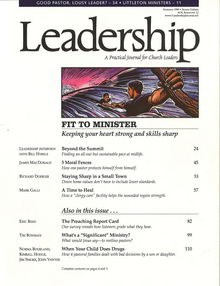