Think of your favorite old TV show. Chances are, you can point to a time when it just seemed to go downhill. Barney Fife left Mayberry. Lucy and Ricky moved to the suburbs. Col. Blake's plane went down. Scrappy Doo usurped Scooby. The "Very Special Episode." All of these, according to Jon Hein, are examples of "jumping the shark."

Hein coined the phrase from an episode of Happy Days in which Fonzie, on water skis, jumped over a shark. That signaled the beginning of the show's creative decline.

Hein created a website that registers millions of votes on more than 2,000 television programs. Even the networks follow the site to gauge viewer perception of a show.

In his book Jump the Shark: When Good Things Go Bad (Dutton, 2002) Hein moves beyond TV and applies his biting analysis to music, sports, politics, and celebrities. "We all know that there's a moment," he writes, "a defining moment when something in pop culture has reached its peak. That instant when you know from now on, it will never ...

Join the conversation on Facebook
Tags:
None
From Issue:Fall 2003: The CallingOctober 1, 2003 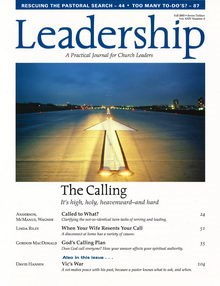