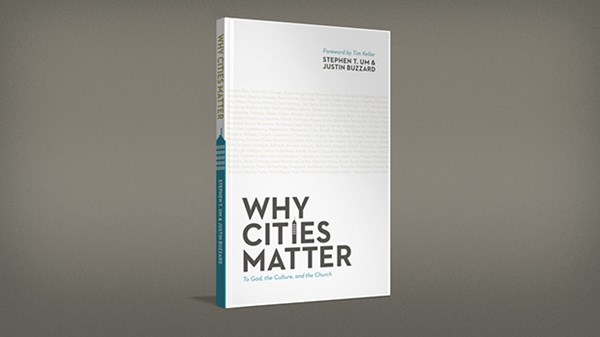 Two new books locate Christians' presence in cities, but only one of them actually engages the city.
Jeff Haanen

Not everybody agrees with Glaeser's glowing assessment, but judging by recent population trends, most do. Every day 180,000 people move into cities, and in 2011, for the first time in world history, the majority of the world's population became urban. It's estimated that in 2050, 86.2 percent of the population of developed countries will reside in cities. As magnets for talent, engines of innovation, and centers of culture, cities have eclipsed the nation-state as the primary sculptors of modern life.

Following tightly on the heels of urbanologists like Edward Glaeser, Richard Florida, and Joel Kotkin, evangelicals have recognized a golden opportunity. Two new books—Stephen T. Um and Justin Buzzard's Why Cities Matter: To God, the Culture, and the Church (Crossway) and Jon M. Dennis's Christ and City: Why the Greatest Need of the City Is the Greatest News of All (Crossway)—herald both the unprecedented importance and unmistakable biblical significance of the city. But only Why Cities Matter strikes the right balance between social analysis and ministry focus, encouraging readers not just to live in the city but also to engage its people and culture with the gospel.

Um and Buzzard are an unlikely duo. Though both are pastors, one (Um) is an academic from Boston, the other (Buzzard) a church planter from Silicon Valley. Um is Asian, in his 40s, and wears suits; Buzzard is white, in his 30s, and wears T-shirts. But perhaps it is just such a diverse relationship—a theme they explore in the book under the heading "connective diversity"—that makes Why Cities Matter a success.

Cities are dense clusters of people as well as centers of power, culture, and worship. For example, the top ten urban regions, home to just 6.5 percent of the world's population, churn out 43 percent of the world's economic output. Cities spawn global culture through movies (Los Angeles, Mumbai), fashion (Paris, Milan), finance (New York, London) law (Washington, D.C, Beijing), and, of course, religion. To those who call cities "secular," the authors retort, "Cities are centers of worship because they are filled to the brim with worshipers—people giving their lives away to realities they believe will fulfill them." There are no urban atheists, they assert; everybody worships something.

'Cities are centers of worship because they are filled to the brim with worshipers—people giving their lives away to realities they believe will fulfill them.'—Stephen Um and Justin Buzzard

Cities have both a magnetic and an amplifying effect that make them engines of ingenuity. Entrepreneurs, creatives, young adults, and immigrants—those with aspirations to "make it"—flock to cities. And when they arrive, urbanites rub shoulders in tightly concentrated areas with those who are vastly different. This "clustered diversity," argue Um and Buzzard, is the secret to a city's strength. The ability of a city to "capitalize population density by fostering connectivity across diverse social, ideological, and professional lines" actually amplifies the skills, talents, and ideas of its citizens. Share an idea for a new business at a coffee shop full of diverse people, and two things happen: Your idea is refined, and new ideas emerge. Diversity, then, is not an issue to be overcome, but a force to be channeled for good.

As pastors, Um and Buzzard aren't content to simply describe urban phenomena. They also offer practical ministry insights for discerning a city's storyline. To unlock a city's unique character, they advise readers to explore their city's history, values, dreams, fears, and ethos. Drawing on their own experience in entrepreneurial Silicon Valley, they invite pastors to understand, challenge, and re-tell their own city's storyline with the hope of the gospel.

Um and Buzzard move chronologically through the Bible, gleaning insight from Paul's missions strategy and the Book of Hebrews. In contrast, Jon Dennis's Christ and City takes a more topical approach, which yields essentially a compilation of sermons on themes like prayer, sex, ethnicity, children, and the church. Though peppered with the occasional quote on urban life, the book is only loosely connected to the theme of the city. Chapters review biblical passages, ranging from Song of Solomon to Jeremiah's popular injunction to "seek the welfare of the city" (Jer. 29:7), and endeavor to draw out personal application for those living "in the city."

Both Why Cities Matter and Christ and City illumine the biblical significance of the city. Both books highlight the urban destiny of the world in the New Jerusalem (Rev. 21-22), God's love for even pagan cities (Jonah 4:10-11; Jer. 28-29), and the prideful foundations of Babylon (Gen. 11:1-9). But they are glaringly different volumes for a single reason: One book is merely in the city; the other is engaged with the city.

A Tale of Two Books

Jon Dennis set out to write an "urban manifesto, a rallying cry for a new generation of global urban Christians." Although Dennis displays great biblical knowledge, the topical chapters are only loosely held together with the phrase "in the city." Chapters on prayer, sex, and ethnicity have little to do with cities themselves, other than the fact that these things all happen "in the city." (Don't they happen everywhere else too?) Other parts of the book are misleading. A chapter entitled "The City Transformed" didn't deal with urban change sociologically, economically, or culturally, but instead simply summarized the Jonah narrative. The connection to the city? Jonah went to Nineveh, and Nineveh was a city. As a collection of topical sermons, Christ and City does well. As an "urban manifesto" for "a new generation of global urban Christians," the book falls woefully short.

In contrast, Why Cities Matter is a succinct, helpful guide to understanding and engaging a city's culture. The authors mine sociology and wed it with biblical theology in an effort to challenge a city's idols (Stephen Um's work with Redeemer City to City shines through here) and re-envision urban ministry with a new source of hope. Critics might deny that yet another book on God and the city is necessary, since Tim Keller has rung that bell clearly for a generation. But brief, cogent books on urban ministry are always needed, especially ones that shed light on something as complex as the modern metropolis.

If evangelicals are going to penetrate global cities with the gospel, they'll need to follow the advice of Matt Carter and Darrin Patrick, who write in For the City:

There are churches that are merely in the city. Their heartbeat is to get people in the doors to hear the gospel. That's a good goal. But, unfortunately, that's often where it ends …. Churches like this are geographically in the city, but they aren't effectively engaged with the people and culture of the city.

No longer is physical presence in the city enough; wise engagement is needed. Like the men of Issachar who "understood the times and knew what Israel should do" (1 Chron. 12:32), evangelicals will need to do the hard work of both biblical preaching and cultural analysis in order to bring the Good News to bear on the world's towers of influence.

Perhaps rural aficionados like Garrison Keillor and Wendell Berry won't agree that the city is humanity's best invention. There certainly will always be need for rural towns and their pastors—and cities have hosts of their own problems. But by all current measures, the future of the world is urban. Understanding cities—without fawning over their spires or despairing over their sewers—will be a key requirement for many 21st-century pastors. Perhaps the best first step would be to follow Um and Buzzard's plain advice: "The best way to learn your city is to follow the same tactics you would use for learning about your neighbor: ask questions, listen, learn."

Jeff Haanen is executive director of the Denver Institute for Faith & Work. He has written for This Is Our City about pay-what-you-can restaurants. His writing can be found at jeffhaanen.com.

Small towns preserve Christianity in the US. The large cities are essentially spiritual wastelands. So many think they have the key to reaching people in the big cities. Instead of writing books, let's see their converts and growing churches. There are no secrets to evangelism. As Jesus wrote, the Christian is responsible for sowing the seed, but the quality of the soil determines its growth. The quality of the soil in most cities is literally and spiritually bad. Many people move to the city to escape the pervasive influence of Christianity in small towns. Criticize those who are "in" the city but not "engaging the people and culture" but those writers will be judged not by the word but by their success at winning converts. Where are your converts, you're fruit?