The Ultimate Law of the Universe: Grace

We spend our whole lives trying to gain control.

As infants, we slowly find control of our bodies, learning how to crawl, walk, and then run. As toddlers, we learn to control our emotions and our behavior—all that socializing our moms and dads instill in us. (Share. Use your napkin. Brush your teeth. Please and thank you.)

As teens, we try to master our desire for the forbidden (which we just discovered is out there for the taking) and our yearning to flee from authority. In college, we often succeed in the latter, and so succumb to the temptations of the former, with less-than-satisfactory results. Enough said.

We eventually sober up, and in our twenties and thirties, we try to shape our future, marrying the right person, starting a promising career, planning when exactly children come. And then we try to control our children so they’ll be obedient and respectful—good people like us.

Often our forties and fifties are focused on keeping our despair in check, as we discover that many if not most of the things we so meticulously planned have fallen apart or never panned out.

At the end, we try to manage our pain and our deteriorating bodies, wrestling with newfound dependence and limited lifestyles. Eventually, we hope to control how we die; dying with dignity may become our chief objective.

All along, at every stage, we try to manage the moral shape of our lives, often to prove to ourselves and to others that we have our act together, that we matter, that our lives are justified. We live as if the ultimate reality of the universe is law, that which can be measured and achieved by effort.

Somewhere in this long narrative we may encounter a strange concept, an idea opposite to our culturally-conditioned control. It’s a scary word. We can’t imagine any good coming from it, because if this word is true, how will anything get done? So it’s a word we put on a high shelf in a dark closet. We try not to think of it.

Until fear makes us desperate, and we begin to wonder if this word is actually liberating.

The word is grace.

To know and bask in grace is to relinquish control. To admit we’re not in charge and never have been. That is someone else’s job.

To know and bask in grace is to release even the desire for control. It is to realize that this desire is the root of all evil, beginning in the Garden.

Relinquishing looks like a drunk who’s finally let go of the bottle he’s been desperately clutching. It looks like husband who, in the middle of an argument, decides he doesn’t have to get his way. It looks like a careerist humbly accepting her failure to get a promotion. It mostly looks like a traveling Jewish teacher who dies willingly as a ransom, and then forgives those who nailed him to the cross.

The catch is that no matter how steeped we are in grace, we remain desperate to clutch that bottle, to get our way, to stay in control. It’s the tragedy of the human condition: we can be fully free only by giving up control, but we are addicted to it! Who will deliver us from this body of death?

Ironically enough, the one who let power go, binding himself with the chains of death that we might be liberated from our desperate yearning for control. And that we might be forgiven for those stretches when we act like everything depends on our mastery of our own worlds.

Surely, to be a responsible member of society, one has to exert a certain level of control over one’s life. We abide by human law, which is just and good, after all, as the Bible regularly reminds us. Christians are not anti-social maniacs. We enjoy good manners and success and peaceful coexistence as much as anyone.

However, we are people who realize that the willpower to control little bits of our lives comes as a gift in the first place, and that any large power we seem to have to control our future or that of anyone else is a mirage. We’ve discovered that the basic law of the universe, that which ultimately controls the outcome not only of our lives but of the cosmos, is grace.

Mark Galli is editor of Christianity Today and co-editor of The Behemoth. A shorter version of this article originally appeared on Key Life Network with Steve Brown. 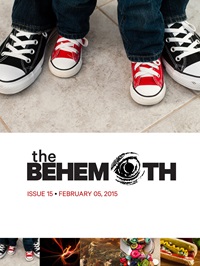