The Pitch Goes On

Intuitively, I—we, perhaps, in the Western world—feel like music should move. It should take advantage of polyphonic possibilities, be catchy, and make you want to dance or sing or nod your head.

We’re accustomed to music as an emotionally and spiritually cathartic thing, and it can be an overt guide and shaper of our experience. I’d know less about love if I’d never heard Peter Gabriel’s “In Your Eyes,” and faith if I’d never sung “Come Thou Fount of Every Blessing.” Melodies and lyrics combine in ways that seem to open us up to meaning, moving us in ways neither can on their own.

But there is a kind of music that lacks both lyrics and melody, that largely lacks movement. This is the drone: a single note, played for a very long time. Drones have been used around the world for years, and traditionally they function as a sort of baseline against which a melody can be played. (Sometimes they’re an actual bass line.) Think of the wheeze of a bagpipe, or the sitar-like buzz of the tanpura in Indian raga (or the Beatles’ “Tomorrow Never Knows”). In Christian music, there’s the ison of Byzantine devotional chant, a low, sung bass note as the rich backdrop for the rest of the piece. The pedal bass notes of a church pipe organ function in a similar way.

There’s something seemingly sacred about drones; as Australian journalist David Rutledge wrote last year, they have “a transcendent, hypnotic quality that under the right conditions can elicit a meditative or even religious response. For those inclined to do so, it’s not difficult to hear God in a drone.” In traditional contexts, the drone is the anchor for a piece of music, the rock upon which a melody can be built. Rutledge interviewed the early music scholar Winsome Evans, who said a drone on a tonic (the first note of a scale) represents “the One,” i.e., “the Godhead,” and “it’s from that One that the melody evolves.” The drone can be a kind of stand-in for the rootedness of all meaning in God’s presence, the work of the Creator sustaining creation.

Modern drone music, too, is linked to divinity and eternality. In the 1960s, composers like Karlheinz Stockhausen and La Monte Young seemed to attribute a deep spirituality to sustained notes, and many contemporary ambient music artists don’t bother with building melody on that mystical foundation. The emphasis is more on creating sustained sounds, and the feel of the drone standing for something much bigger remains. Stockhausen wrote a series of pieces (Aus den siben Tagen) which direct performers to simply play sounds for as long as they want or can, and to consider the cosmological implications of infinity. Young formed an improvisational group, the Theatre of Eternal Music, that played hours-long pieces based on drones.

There’s something of intentionality and slowness to this music compared to the pop and rock music that provides a backdrop for many of our lives, and that seems to open listeners up to transcendence in ways other music does not.

I first heard about drones because of rock music, though. Mercury, the 1995 album by the Christian indie rock band the Prayer Chain, opens with the ethereal “Humb,” built around a formless guitar drone created by engineer Chris Colbert. It doesn’t sound like a guitar at all, though. It sounds like . . . I don’t know, an ocean? A forest? It’s a beautiful sound, and one that got me interested in the spiritual possibilities afforded of drones: What is the potential of this kind of music for expressing the kind of awe and wonder we feel in the presence of God?

A friend and onetime bandmate of mine, Kevin Davis, records ambient music under the name betacicadae. I asked Kevin whether he thought there was any connection between drone and ambient music and Christian spirituality. “Centering prayer often uses a short single phrase (Christ is love, etc.), repeated as a tool to come back to a place of focus in Christian mysticism, like the mantra ohm in Eastern meditation,” he told me. “I think drone has an analogous musical effect.”

I got a similar response from Jesse Eubanks, who runs the Christian social justice ministry Love thy Neighborhood in Louisville, Kentucky, and who has also recorded several ambient pieces that incorporate drones: “I think drones offer a special invitation to the listener,” he said. “God is infinite and unchanging. Drones are about timelessness. They don’t focus on the question of ‘What’s going to happen next?’ and instead focus on ‘What exists now?’ They are like musical breath prayers. They can be an aid to being mindful to the presence of God—to practicing meditative prayer and contemplative Scripture reading. Sonically speaking, by the nature of their form, they help us in quieting the outside world and our own anxieties and hearing the Still Small Voice.”

This was all appealing. Like many of my generation, even though I’ve played and sung them for years, the pop-style songs I hear on Sunday mornings are less compelling to me than they used to be, and I often feel a yearning to try something different, musically, for worship. Last week, I decided to actually do it.

I persuaded my pastor to let me use the sanctuary of the Anglican church our congregation rents for a couple of hours one night. I asked my friend Matt Smith, who is a great pianist and has a cool synthesizer, to come along. We decided to play in the key of C—in fact, to play mostly just the note C, and add improvised flourishes as we saw fit. I brought a bass guitar, which I leaned against an amplifier for most of the night, letting the feedback do what it would, creating a long, loud hum. Matt turned up the reverb and the delay on his synth, holding chords for minutes at a time. We did this for about 90 minutes, Matt playing triads and single notes on the synth, me fiddling with the volume knobs on the bass amp, trying to control the timbre of the tones.

This was meant as a musical and spiritual experiment, to see what we could do with drones, and also if drones would “do” anything to us, or to the church. I was too focused on trying to create sounds to feel like I was doing anything close to prayer or meditation the way Kevin and Jesse talked about, but when I listen to the recordings, I can imagine, I do believe, that something unique happened.

I started to figure this out when I asked my friend Hedy Law, who is a musicologist at the University of British Columbia, what she thinks happens when drones are used for religious purposes. She talked about how religious music (especially in chants or drones or other hypnotic, repetitive forms) is an interpersonal experience—a group of people allow themselves to be taken to a sublime space together. “You can’t just play a drone” and expect it to be spiritual, she said. “It cannot be coerced. It has to be something very deliberate in order for that religious experience to happen.”

I asked her, then, what she thought happened when we played those long, sustained sounds in the church that night. She responded with another question: “What did you want to do?”

She explained that you can use a drone to create a religious space, but the religious experience is intersubjective. The experience of sonically transforming a space can only be understood in relation to some other space or experience. By attempting to change the sound in a religious space, you can suggest a different spiritual experience, perhaps. I realized then that my goal of filling the sanctuary with drones, feedback, and ambient noise was in part a reaction to the music I hear on Sunday mornings. The whole notion of slowness, patience, and timelessness is opposite not only to most modern church music, but to most of the pop or jazz or classical or folk music we listen to every day. I wanted to try something slower, more focused and contemplative.

What we played was nothing like a Sunday morning rendition of “Blessed Be Your Name”—not something better or worse, but utterly different. No choruses, no verses, no words, just tones ringing out in an empty space designed specifically for worship. There was a stillness and a solemnity in the room I’d rarely felt in a church before. I did feel like I was in a different place, somehow.

Drones don’t make timelessness or eternity or God, of course, but they can, I think, sonically shape a space—shape us—in ways that make us more attuned to these mysteries. And this music that is different from what most of us know, that’s supposed to not move, begins to feel like something other than music, almost: something otherworldly, outside of time, and even holy.

Joel Heng Hartse is a lecturer in the Faculty of Education at Simon Fraser University. He is the author of Sects, Love, and Rock & Roll and is currently working on Dancing About Architecture is a Reasonable Thing to Do, a book on writing about music. He wrote about the diversity of language for The Behemoth’s issue 20. 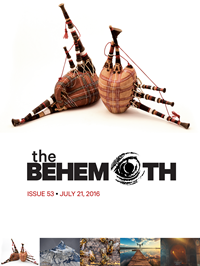