November 8, 1974
This article is from the November 8 1974 issue. Subscribers can read all of CT's digital archives.

A modern-day Everyman? Perhaps not intentionally. But Lonesome Stone, a British multi-media rock musical, leaves the viewer with that impression. For regardless of the character’s name, each is “Lonesome Stone,” with a “mind as quick as grease./All he lacks is faith and love/And a little peace.” Lonesome Stone stands on every street corner in every city in every color, “lost within.”

Each character is little more than a stereotype—vegetarian, speed freak, revolutionary, drug dealer, gay libber, and foxy female. Some viewers have objected to the use of stock characters, but for the purpose of the play stereotyped characters were essential. Lonesome Stone does not pretend to be a character study; it is a story, based on actual experiences, of a drug dealer and user turned Christian. And it’s a story that hundreds of young Christians today can call their own.

The cast is a good example of this. Most members come from the drug scene, either the Haight-Ashbury area of San Francisco, the setting for Lonesome Stone, or its counterparts in England and Germany.

Jim Palosaari, who conceived, directed, and produced this musical (see October 11 issue, page 47), chose a cast with no previous theater experience. But one wouldn’t learn that from the show itself; both singing and acting seem quite professional.

The musical uses some intriguing slow-motion sequences. Easy to do on screen, such scenes require a great deal of precision and skill to be effective on stage. The Lonesome Stone cast succeeds. With special lighting effects, the cast has a prolonged slow-motion fight scene, where police raid the group’s den, beat up the leader, called “The Bear” (performed ably by Fred Gartner), and drag him off to jail. Facial expressions ... 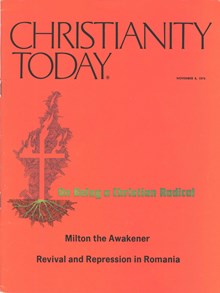 This article is from the November 8, 1974 print issue. Subscribe to continue reading.