Occasionally we are confronted by saints who challenge us to an uncompromising spirituality. The founders of the great monastic orders during the late Roman Empire and throughout the Middle Ages were Christians of this sort. So were many of the Anabaptists of the Reformation era.

These heroic Christians took seriously the New Testament suggestions that the Christian life is one of war with the world, the flesh, and the Devil. Accordingly, they formed communities in which they renounced the world, denied the flesh, and sought a communal spirituality against which the gates of hell could not prevail.

God’s Revolution is a collection of fragments from the messages of one twentieth-century adherent to this age-old call to kingdom living, Eberhard Arnold (1883–1935), who in 1920 founded the Bruderhof community in Germany. And it is a labor of love. Indeed, a preface by Malcolm Muggeridge and an introduction by John Howard Yoder indicate the respect that the spirituality of Arnold and his communities attract to this day.

Arnold became convinced by the necessity of a radically antiworldly Christianity and eventually affiliated his community with the Hutterian brethren, a historic Anabaptist group. As John Howard Yoder’s introduction indicates, Arnold’s piety grew out of pietist roots similar to those that fostered much of American fundamentalism and its evangelical successors. In fact, Arnold’s early spiritual heritage was shaped by the Student Christian Movement (SCM) that originated in Dwight L. Moody’s revivals. The SCM called for a ...

Born Again—And Beyond
expand
hide this 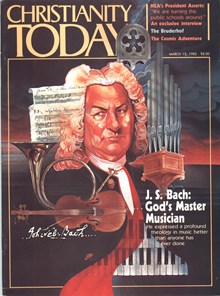 This article is from the March 15, 1985 print issue. Subscribe to continue reading.