Welcome to our fifth semi-annual independent artist spotlight. The music industry continues to come to grips with technological advances like digital file sharing and cost-effective recording gear. In some ways, it makes it harder to find longevity as an artist with a recording contract. In other ways, it's easier than ever for an indie artist to make a start and get music into the hands of a willing audience. The following ten examples, gathered over the last six months or so, prove that point. Some could well be on their way to greater success, and others will remain more effective at sharing their music locally. What they all have in common is a level of excellence that rivals what is heard by other artists on the radio and sold in stores. Click on the links to the artists' websites for sound clips, ordering CDs, and booking information.

You might recall an album from Vineyard Music Group called 1000 Generations, involving a modern worship team from Atlanta. This is not the same group, though it is a worship team bearing the same name from a Vineyard church in Indianapolis. Led by multi-instrumentalist Steven Potaczek and his wife Amanda, it's an exemplary and eclectic pop album. Except for the opening track—the world-music influenced "He Is Yahweh" from Vineayrd's All I Need—1000 Generations relies on vertically focused pop originals that most resemble the music of Paul Simon, Michael W. Smith, and Bruce Hornsby (who has personally complimented the band's musical talents, especially Potaczek's stunning piano proficiency). "Eyes" is a wonderful and celebratory fusion of Latin, jazz, and South African pop. You can't help but think of early ...

Join in on Facebook
Tags:
None
Posted:
January 1, 2004
More From:
Russ Breimeier with LaTonya Taylor 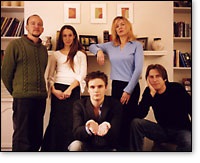