For a Christian film critic like me, one of the more interesting things about the recent glut of horror sequels and remakes is the opportunity it has given me to go back and look at the classic thrillers that I avoided at all costs in my younger days. When I was a child, I was reluctant to expose myself to any supernatural story that didn't have the clear imprimatur of some evangelical author or other, and by the time I became a man and put away childish things, many of the films made during my youth had faded into video-store oblivion. So the best thing I can say about Andrew Douglas's remake of The Amityville Horror is that it gave me a reason to track down the original film, which I remember hearing about when I was still in grade school, and which, to my surprise, has a fair bit of Christian content. 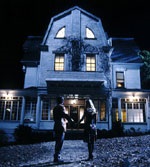 Honey, it's our new home! Let's run for our lives!

In that 1979 original, based on a book by Jay Anson and directed by Stuart Rosenberg (Cool Hand Luke), it is made very clear that George and Kathy Lutz are a Catholic couple, who count a nun among their relatives and ask a priest to bless their home as a matter of course. When the priest is driven out of the house by some sort of evil presence, he begs his ecclesiastical superiors to let him seek help for the family, but the church bureaucracy is skeptical of his claims and turns him down. In some ways, the film harks back to The Exorcist, but where that slightly earlier movie was content to express the conflict between skeptical modernity and spiritual pre-modernity suggestively, through its use of sounds and images and character arcs, The Amityville Horror spells things out more bluntly, as the characters use words like "modernist" and "rationalist" in their conversations. 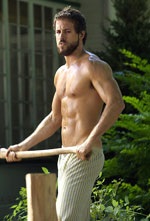 Leading man Ryan Reynolds and his Amityville Abs of Steel

Still, even a blatantly obvious discussion of the relationship between faith and doubt can be better than no discussion at all, and alas, the faith elements are all but missing from the Amityville remake. Written by Scott Kosar, whose earlier credits include the remake of The Texas Chain Saw Massacre, and directed by Andrew Douglas, whose only previous film is the alt-country documentary Searching for the Wrong-Eyed Jesus, the new movie is completely uninterested in offering or exploring any sort of subtext to the events that transpire at the Amityville house. Instead, it offers little more than a stylish exercise in cinematic shock and awe, full of lightning storms and ghosts popping up in mirrors and windows, and lacking anything that might stick with you once the ride is over.

The film insists it is based on a true story, and the opening scenes use just enough real-life news and crime-scene footage to make that claim stick. In 1974, Ronald DeFeo Jr. murdered the other six members of his family, most of whom were in their sleep, and the opening re-enactment of this crime is followed by actual clips of the detectives who investigated the case. The film then picks up one year later, when George Lutz (Ryan Reynolds) and his wife Kathy (Melissa George) buy the former DeFeo house; while other buyers have steered clear of the building, the Lutzes figure they should take advantage of its low, low price. After all, houses don't kill people, people kill people, right?

However, spooky things begin to happen almost as soon as the family moves in. George finds the temperature too cold, and spends hours chopping firewood, his behavior becoming more and more obsessive with every swing of his axe. The first time George and Kathy have sex in their new bedroom, George suddenly sees a girl hanging from a noose at the foot of the bed—which is odd, since the DeFeos were shot, not hanged. Shadowy figures zip through rooms when people aren't looking. Fridge-magnet letters spell scary messages all by themselves. And sweet young Chelsea (Chloe Moretz) begins to pass on messages from her new "imaginary friend" Jodie (Isabel Conner)—and it doesn't seem to faze her at all that Jodie has deathly-pale skin and a bullet hole through her head.

The film's co-stars are a pretty sexy couple, and comedian Reynolds in particular seems to have no trouble flaunting the muscles he built up for his vampire-hunting role in Blade: Trinity. Perhaps no episode captures the new film's emphasis on cheesy humor, perfectly toned bodies and grotesque special effects like the one involving the babysitter Lisa (Rachel Nichols). When she shows up, she's dressed in clothes so tight and skimpy you'd think she was going out on the hottest of dates, instead of looking after the kids so that Mr. and Mrs. Lutz can spend an evening together. George takes this in his stride and asks his step-son Billy (Jesse James), who has been protesting that he's too old for a babysitter, if he really doesn't want to be alone with this bombshell after all. And when Lisa is trapped inside Chelsea's closet, Jodie shows up and sticks Lisa's finger right inside her forehead.

No, it's not another Scream movie, but it might make you scream

Nearly an hour of this sort of thing goes by before Kathy finally turns to a priest for help, and when Father Callaway (Philip Baker Hall) does show up at the Lutz residence—not to perform a routine blessing, this time, but to perform an exorcism—he is scared away pretty quickly and more or less abandons the family without trying to contact them or to solicit the help of his fellow clergy. And so they are forced to struggle with ever more brutal events—the death of a dog, the discovery of centuries-old torture chambers under the building, and so on—and we are compelled to endure these trials with them. Those who want nothing more than a thrill ride might get a kick or two out of this film, but the rest of us might prefer to hold out for something a little more thoughtful and interesting.

The Amityville Horror is rated R for violence, disturbing images, language, brief sexuality and drug use. The film is full of gruesome and shocking images, including bodies hung from hooks, showers of blood, and the ghosts of various corpses. The film's one sex scene involves a married couple, and in one scene, a babysitter asks a boy if he knows how to French kiss.

Did the voices make him do it? Or was it the moviegoing public, clamoring for more cheap and bloody thrills?

The Amityville Horror was a big hit in the mid-70s, a creepy big screen rendition of a somewhat-true story. The headlines that inspired it are still troubling: A young boy murdered his parents and his siblings in their sleep in 1974, and then, a year later, a different family moved into the same house and were driven out by an oppressive spiritual force. But the news wasn't troubling enough, apparently. So a 1977 novel sensationalized these events and inspired a popular movie and a series of lousy sequels.

Since today's popcorn addicts seem to have a limitless capacity to absorb cheap and indulgent horror flicks, filmmakers seem perfectly content to recycle old material. Just a few weeks after the forgettable, disposable Boogeyman, the new and not-at-all-improved Amityville Horror is No. 1 at the box office.

"Those who want nothing more than a thrill ride might get a kick or two out of this film," says Peter T. Chattaway (Christianity Today Movies), "but the rest of us might prefer to hold out for something a little more thoughtful and interesting."

He observes that the "faith elements" of the earlier versions have been left behind. "The new movie is completely uninterested in offering or exploring any sort of subtext. Instead, it offers little more than a stylish exercise in cinematic shock and awe, full of lightning storms and ghosts popping up in mirrors and windows, and lacking anything that might stick with you once the ride is over."

Christopher Lyon (Plugged In) says that the filmmakers "must have decided that they'd need lots more blood, scary images and violence to attract a new audience. And they do pile it on. So much so that their Amityville becomes little more than a series of artificially scary supernatural and bloody moments." He adds that the film "waters down respect for God's power over evil (along with respect for human life) 'just for fun.'"

David DiCerto (Catholic News Service) says, "Amityville has a few genuine jolts but ultimately unravels into a muddled stew of sensory overload and confusion. The scariest thing about [the movie] is that it is the last major film made by MGM—the studio that made such classics as The Wizard of Oz, Ben-Hur, and Singing in the Rain—before its recent purchase by the Sony Corp. It's a pity that the MGM lion will go out with a whimper, not a roar."

Dr. Kenneth R. Morefield (Christian Spotlight) concludes that the movie "manages to present the Christian faith as the root of all evils … and the cowardly lion that abandons all those who look to it for help from the evils it has unleashed." He gives it an "F."

Mainstream critics aren't scared so much as they are bored. My favorite quip comes from William Arnold (The Seattle Post-Intelligencer): "The new version … is so full of false beats, heavy-handed staging and unnecessarily overblown effects—and so lacking in suspense and character involvement—that it's about as scary as a Toyota commercial."

1 of 4
Honey, it's our new home! Let's run for our lives!Leading man Ryan Reynolds and his Amityville Abs of SteelMelissa George as a terrified Kathy LutzNo, it's not another Scream movie, but it might make you scream