If Rory O'Shea could choose an occupation, he might select piracy. He's got a mouth like a sailor and an enormous sense of adventure. There's just one hitch: he's confined to a wheelchair due to Duchenne Muscular Dystrophy (DMD), a degenerative muscle disease. But, Rory's a pirate at heart. Despite his nearly total paralysis, he makes good use of his able-bodied mouth and just two functioning fingers, which he self-deprecatingly says he uses for "self-propulsion and self-abuse."

But the kid does have some heart. And that's what Damien O'Donnell, director of Rory O'Shea Was Here (a.k.a. Inside I'm Dancing), wants us to know. In fact, it seems that O'Donnell holds our hands and leads us through semi-climactic adversity after semi-climactic adversity in order to demonstrate the heart of his movie. Maybe that's why other elements of the film—like the script (written by Jeffrey Caine) and the editing—were left on the side of the road. As much as I love a movie about carpe diem, drooping microphones tend to distract me, especially when they droop into as many as four scenes. "Heads up! Incoming!" If it happens once, shame on the director. If it happens four times, it's apparent the grip has lost his grip, and it may be time put together his severance package.

Microphone blunders aside, Rory O'Shea follows the story of two "unlikely friends," Rory O'Shea (James McAvoy) and Michael Connelly (Steven Robertson). Michael, an absolute cherub and life-long inhabitant of Carrigmore Residential Home, suffers from cerebral palsy (CP), a disability that has alienated him from his family (an ashamed public-figure-father) and has caused him a profoundly severe speech impediment. As a result, Michael has grown dependent on the aid of Eileen (Brenda Fricker) and her staff of nurses at the residential home.

Steven Robertson is the communication-challenged Michael

Then, "one fateful day," Rory arrives at Carrigmore—against his will—and throws a wrench into Michael's life and Eileen's plans. Furthermore (surprise!), Rory discovers his "gift": he's the only one who can truly communicate with Michael and understand his slurred speech without the help of Michael's alphabet chart. The longer Rory stays at Carrigmore, the greater his desire to live an independent life grows. But, in order to live that independent life, he must receive monetary help from the state. Unfortunately, the state gets wind of Rory's antics (e.g., Rory spends charity money for the disabled to woo two women in a bar, saying it's for "funding the needs of the disabled. I'm disabled and I need a drink") and deems him irresponsible for independent living. Michael, though, just might be able to save the day by submitting his own application for independent living and insisting that he needs an interpreter … Rory.

Along the way, the two meet Siobhan (Vanity Fair's Romola Garai), a sexy drifter who agrees to be the boys' personal attendant (PA). Needless to say, Siobhan's very presence acts as a plot-thickening agent as she struggles to live her own life, take care of two dependent men, and avoid breaking Michael's heart, a heart that has grown to love (or just need?) her. 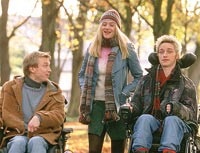 Romola Garai plays Siobhan, who has the task of taking care of the two young men

So, here's the bad news: Rory O'Shea Was Here is a technical mess. The final version looks like an unfinished cut, similar to a grammatically incorrect doctorate. In addition to the microphone errors, the transitions are horrible (i.e. missing) and the scenes act as independent vignettes, not cohesive elements. In some scenes, the director deceives us into believing that something just awful is going to happen. For example, on one of Siobhan's first days as a PA, she runs between Rory's bedroom and Michael's bathroom, trying to get both men ready for bed. Meanwhile, the director cuts to an iron burning through a shirt. Instead of a raging fire or an object lesson, Siobhan simply realizes she left the iron on the shirt, curses, and corrects the situation. So, what was the point of the iron? Well, you could argue that the iron symbolizes Siobhan's hectic job—but, didn't we see that with all of the work she faces to put Michael and Rory to bed?

There is some good news, though. Despite the contrived story and predictable plotline, Rory O'Shea urges viewers of all abilities to live life to the fullest. In contrast to the recent backlash against Million Dollar Baby and, in the end, its treatment of people with disabilities, Rory celebrates our desire to live freely and fully, regardless of one's physical condition. Because, whatever our disability (and we all have something), we can embrace opportunity and discover greatness.

That is, as long as we don't bang our heads against intrusive microphones that keep poking themselves into the scenes of our lives—a la Rory O'Shea.

Rory O'Shea is rated R for language, as Rory's vocabulary is liberally sprinkled with profanities. He's entertaining at times, but he can also be very inappropriate and cutting. In addition, the film deals with adult themes like taking control of one's life, embracing independence, and following (or not following) society's rules. There's also a protracted and awkward nightclub scene in which Rory and Michael watch Siobhan dance.

Beneath his gruff behavior and cuss-heavy talk, Rory O'Shea (James McAvoy), a young man bound to a wheelchair as a result of Duchenne Muscular Dystrophy, has just enough heart to win audiences' support in the film about his struggles with limitations and attitudes. In Rory O'Shea Was Here, Rory befriends Michael (Steven Robertson), who suffers from cerebral palsy and struggles to communicate through a severe speech impediment. When Rory discovers he has a special gift for understanding and translating Michael's speech, he exploits that talent to try and escape the consequences of his own misbehavior. Things get more complicated when a sexy young drifter (the radiant Romola Garai of I Capture the Castle and Vanity Fair) gets to know the men and agrees to work as their attendant.

Mary Lasse (Christianity Today Movies) says, "Despite the contrived story and predictable plotline, Rory O'Shea urges viewers of all abilities to live life to the fullest. Rory celebrates our desire to live freely and fully, regardless of one's physical condition. Because, whatever our disability (and we all have something), we can embrace opportunity and discover greatness."

David DiCerto (Catholic News Service) calls it "a heartening drama about finding that life is full of possibilities, even when it seems otherwise. Director Damien O'Donnell restrains any heavy-handed sentimentality, showing his disabled leads as flawed and presenting them in honest and fully human terms. The film's impassioned message—that every life is worth living, even when physically compromised—is a refreshing response to the better-dead-than-disabled attitude advocated in recent films like The Sea Inside."

Mainstream critics find the film predictable and melodramatic, but many of them still think it's worth the price of a ticket.

1 of 3
James McAvoy plays the rebellious RorySteven Robertson is the communication-challenged MichaelRomola Garai plays Siobhan, who has the task of taking care of the two young men