American Idol and similar shows make it clear that many people have no clue what kind of competition they face on the path to success in the music biz. One might think that artists on TV and radio represent most of the talent pool, but they're really just a tiny minority of all the people out there trying to get their music heard.

Truth is, great artists make great art look easy. And in our media soaked-culture, it's not enough to "simply" make good music. It's also about making good music that stands out among thousands of other artists, who coincidentally or intentionally may have the exact same sound. Kind of builds your appreciation for the cream of the crop, huh?

Here's a list of the ten best of hundreds of albums sent to us in the last year.

If you haven't heard this band yet, chances are you will soon enough. The Dallas-based quintet recently partnered with Deep Music Distribution, which has helped get established indies like Matt Brouwer, Justin McRoberts, and Denver & the Mile High Orchestra to stores and radio. Addison Road became buzzworthy with their popular 2003 release Breaking Beautifully, an album that has done well enough to run the band ragged with opportunities to tour and lead worship all over the country. Nevertheless, they've found the time to record this little album, reflecting their commitment to rejoice in the Lord during all times, stressful or tranquil. The band resembles a more rock-focused Superchic[k], with lead singer Jenny Simmons recalling Adrienne Camp (The Benjamin Gate) and Alanis Morrisette. But whereas Addison Road's previous two albums offered good-but-generic youth-friendly Christian rock, this one reveals a more arty and mature ...

Join in on Facebook
Tags:
None
Posted:
January 1, 2005
More From:
Russ Breimeier 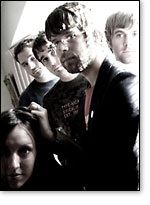 Ten Independent Artists You Should Know (Fall 2005)
expand
hide this